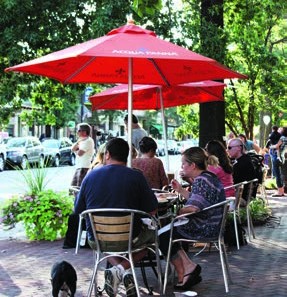 Top Towns 2021
A look at the best towns in our neighborhoods.

While there’s never been any shortage of civic pride across South Jersey, the pandemic has certainly solidified our love affair with the place we call home. With our dedicated health care workers, first responders and other essential workers leading the charge, many residents quickly banded together to support one another during the most trying of times in the true definition of what it means to be a community.

And now that things appear to be turning the corner, folks are eager to gather with family and friends to take advantage of all the wonderful things our area has to offer. Whether grabbing a bite at your favorite restaurant, shopping at a local boutique or enjoying the outstanding recreational offerings, South Jersey is starting to feel alive again.

That’s why it’s such an exciting time to present this year’s Top Towns. Our annual rankings of South Jersey’s most coveted communities was put together using data from the New Jersey State Police, the New Jersey Department of Education and the state’s Division of Local Government Services. Using a weighted formula, we combined average property values and taxes, crime incidents reported per 1,000 residents and high school performance numbers consisting of average SAT scores, graduation rates and more. The rankings are further broken down into two categories: big towns (population above 10,000) and small towns (population under 10,000).

Moorestown took this year’s top honors, but rest assured every town in the tri-county region can make an argument for why they should be atop the list. In fact, only the slightest of percentage points separate a lot of these towns and ultimately every one is a winner because the whole is greater than the sum of its parts.

Back in the Swing of Things
Encouraged by the latest trends, South Jersey communities look to push past the pandemic.

Typically, this time of year is met with great excitement as the spring weather becomes more favorable and folks look to officially break free from Old Man Winter. And that is especially true now that we’ve spent more than a year under the cloud of COVID-19. With vaccination rates rising and infection rates dwindling, South Jersey residents are eager to return to their pre-pandemic life. While there are still some hurdles to clear, it appears brighter days are in our very near future as Gov. Phil Murphy recently pulled back several restrictions with more notable changes expected to arrive soon.

As anticipation builds over the potential to put this pandemic in our rearview mirror, we spoke to several South Jersey mayors to find out how they’ve been able to successfully manage the hardships facing their communities and how they see things changing for the better.

“Like every town across South Jersey, and the country, there’s no doubt that Cherry Hill’s residents and businesses have experienced daunting challenges throughout this pandemic. There’s also no doubt in my mind that our community has truly stepped up over the past year and has gone above and beyond when it comes to adjusting to this new way of life,” says Cherry Hill Mayor Susan Shin Angulo.

In Voorhees, Mayor Michael Mignogna says the township has been very proactive to meet the ongoing challenges caused by the pandemic, including the police department’s formation of the Residents in Need Task Force.

“We have done our best to promote our businesses and encourage our community to shop locally. We have asked our residents to consider buying gift cards as a way of support. And we have worked with our restaurants in helping them to create or expand outdoor seating,” says Mignogna.

An economic advisory council was formed in Evesham and the township started Marlton Mondays where people were offered a 10% discount to patronize local businesses on a day of the week that is traditionally slower than others.

“What we really needed to do was spread the word and help the local businesses feel supported,” says Jaclyn Veasy, mayor of Evesham. “Supporting local is our mantra all the time, but especially during this past year because the more you do, the more it keeps your community strong.”

When the pandemic began to take hold, Washington Township Mayor Joann Gattinelli says her phone was ringing off the hook with calls from residents asking what they could do to help their neighbors, whether offering to pick up groceries for the elderly or giving professional advice to struggling business owners. “People were coming out of the woodwork,” she says. “They just wanted to roll their sleeves up and dive in … everyone came together, it was a group effort.”

Gattinelli adds that despite the financial crisis hitting businesses hard, the township has seen a steady increase of activity with 15 new businesses opening up already this year. “People are coming into town and they are excited,” she says.

Similarly, Moorestown has also seen some new businesses come to the area and Mayor Nicole Gillespie says civic pride has been on full display.

“Of course, there have been losses, but the community really came together,” she says. “Various groups worked hard to make sure everyone knew which businesses were open in the early days of the pandemic and needed our support. Most of the restaurants saw an increase in demand for takeout and delivery and people definitely took advantage of the expanded outdoor seating options, even when it was still really cold.”

With the vaccine rollout further inspiring consumer confidence and with outdoor restrictions being eased significantly, the opportunity has presented itself for events to return. While that is certainly an indicator that things are moving in a positive direction, officials are proceeding with caution.

“There have been some smaller events that have taken place, but larger events still are not [happening],” says Neal Rochford, mayor of Haddonfield.

While that means the borough will not host its annual Memorial Day Parade or Arts and Crafts show this summer, Rochford says the fate of the Fourth of July parade and fireworks is still undecided.

“Events are carefully reviewed by the commissioners to provide that all protocols are being followed. With the rate of infections going down, more events will return plus new ones,” he says optimistically.

Mount Laurel Mayor Stephen Steglik says the township is exploring ways to expand the playground area at Laurel Acres Park so more families can have fun safely and he hopes to have a full events calendar as soon as possible.

“One of the most difficult decisions we had to make during the pandemic was the decision to cancel our events,” Steglik says. “We continue to monitor current COVID numbers for Burlington County as well as stay up to date with the governor’s executive orders in the hopes of having a community event this fall.”

Veasy says Evesham officials have begun to have conversations with regard to events, but despite the townships nearly 70% vaccination rate, some of the larger happenings still aren’t feasible just yet.

“Unfortunately, we are going to go one more year without a Fourth of July parade. … We don’t have enough time to put it together and make it right,” she says, citing rules and regulations from the state that are being updated in real time, thus making in difficult for organizers to plan accordingly.

However, Evesham is hopeful to still have a fireworks display on the Fourth, but “what that is going to look and feel like is probably nothing like it’s been in the past,” says Veasy.

Both Moorestown and Washington Township have tabled big July 4th celebrations as well, but other outdoor events are moving forward.

“We are going to have movies and concerts in the park,” Gattinelli says. “And there’s a lot more events we haven’t finalized yet, but we are working on the Rotary Wine Festival and are considering National Night Out, which would be in August.”

Gillespie says that while Moorestown Day will also be canceled for this year, other notable events like the arts and crafts fair on the lawn of the Community House and the Strawbridge Lake Kayak/Paddleboard Race are full steam ahead.

Meanwhile in Cherry Hill, the Al Fresco Affair Food Truck event series kicks off at Croft Farm on May 27 and will be held on the last Thursday of every month through September. The farm will also be host to the Juneteenth Parade and Festival on June 19 while Barclay Farmstead will be the site of a Music Under the Stars concert on July 6.

“One of the great parts about these events is that we have two fantastic venues to host them,” says Shin Angulo. “Croft Farm was revamped right before the pandemic … we’re now working on trail upgrades and a new dog park at the site, so I’m especially excited for residents to be able to come out and enjoy it.”

Though enthusiasm levels are high, the officials we spoke with all still stress the importance of following safety protocols, whether vaccinated or not, and the need to continue showing the resolve and resiliency that make our area so strong.

“Our community has always risen to the occasion in emergent times and this has been no exception,” Mignogna says. “In Voorhees, we’re six feet apart, but closer than ever.