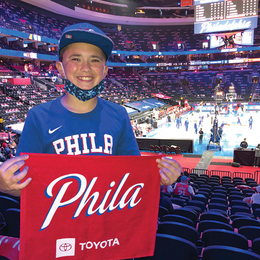 Game On
Local sports fans have the opportunity to see their favorite professional teams in action again, but are the new safety protocols worth the effort?

Brian Dappolone is admittedly not the type of Philadelphia sports fan who analyzes Ben Simmons’ jump shot, loses sleep over the Flyers’ failure to make the playoffs or calls WIP to complain about Howie Roseman’s draft record with the Eagles. But heading across the Walt Whitman Bridge to Citizens Bank Park—like he did with his family on April 7 for the first time in almost two years—is always a nice way to spend a few hours in the sun, watch some Phillies baseball and enjoy the obligatory crab fries from Chickie’s and Pete’s.

Of course, this day at the ballpark was unlike any other he had experienced before. People were wearing masks, the Phillie Phanatic’s antics were limited to the area around the field and there was a strange run on soft pretzels at the concession stands. Social distancing mandates in the seats and capacity limits also made the 43,035-seat ballpark feel empty, evoking painful memories of the Phils’ last-place teams of the ’80s and ’90s at Veterans Stadium.

But after a year in which local fans had to save their cheers—and boos—for their own living rooms while watching games on TV, just getting a chance to see live sports again was well worth the necessary adjustments of the COVID era.

“We still had fun,” says Dappolone, a Marlton resident who attended the game with his wife, 6-year-old daughter and father-in-law and saw the Phillies defeat the New York Mets, 8-2. “The seating was a little more spread out, which was kind of nice because you get more leg room, there’s nobody next to you and you don’t have to stand up as much to let people through. It’s definitely roomier but it does feel empty; it doesn’t have that full stadium feel.”

Philadelphia had regulations at the time—which have since been lifted—that required patrons to purchase food with their alcohol order, which is why Dappolone saw so many fans walking around with beers and pretzels. The Phanatic Phun Zone and other entertainment options for the kids were closed, but his daughter did enjoy watching the Phanatic dance on the dugout.

All in all, even with the changes it was the kind of family outing that just wasn’t available in 2020.

“I would go back to a game,” he says. “All of those restrictions don’t bother me. I’m not a big crowd person, so to me, it’s much better when it’s 25% [filled]. Having a kid with you, it also helps when there’s less people.”
There are those who agree with Dappolone and are willing to abide by the new rules in order to watch Joel Embiid lead the Sixers to the No. 1 seed in the Eastern Conference or see Bryce Harper pummel baseballs into the upper deck. Others feel like the protocols in place are restrictive to the point of making them uncomfortable. Either way, it’s nice to have the option again.

When professional sports returned last summer following a few months of inactivity in the early months of the pandemic, the NBA and NHL resumed their seasons at neutral “bubble” sites. Major League Baseball held games at home stadiums, as usual, but with no fans in attendance. The NFL then kicked off in the fall with spectators in a handful of cities, but nothing like the raucous, sold-out crowds of normal seasons.

The current NBA and NHL seasons began with some teams allowing fans; guidelines in Philadelphia prevented the Sixers and Flyers from doing so, but were finally loosened in March, paving the way for just over 3,000 spectators per game at the Wells Fargo Center. The Phillies followed suit when their 2021 season officially began.

Washington Township resident Pat Finn, a diehard Sixers fan and longtime season ticket holder, was excited about returning despite the new protocols, which included mandatory face coverings unless eating or drinking in your seat, filling out a health questionnaire before entering the arena and cashless transactions at concession areas.

“We were pumped; we couldn’t wait to go back,” says Finn, who attended his first game in April with his girlfriend. “I wasn’t worried at all because I knew how safe they would be. One time I left my mask down too long when I was taking a sip of a drink. An usher came down, tapped me on the back and reminded me to put my mask back on. I could see if you’re sitting down having a meal at a restaurant, you don’t want someone tapping you on the shoulder every time you’re not taking a bite. But I thought this was fine.”

Finn’s interactions with the Wells Fargo Center staff were nothing but pleasant, but other local fans were not so lucky. Tim Kerr, a South Jersey realtor who does extensive business in Burlington, Camden and Gloucester counties, was looking forward to attending his first game of any kind since the pandemic started when he and his wife went to see the Flyers in April. But despite sharing a name with a Flyers legend from the ’80s—who he is not related to—Kerr did not have the red carpet rolled out for him.

Although following the rules of only taking his mask down to eat or drink, Kerr felt he was being badgered by the usher in his section, who even took issue with how slowly he was eating his pretzel at one point.

“This was now the third time he had come up to me and I calmly told him that I was following the rule as he explained it to me earlier,” Kerr says. “So he pulls his mask down and starts yelling at me, ‘I’ve been watching you eat that pretzel for a half hour, nobody takes that long to eat a pretzel. You have to put your mask on, you’re not following the rules.’ He wasn’t even following his own rules because he didn’t have his mask on and was spitting all over my wife and I while he was yelling.”

Kerr stresses that he does not have a problem with wearing masks when required, and that he and his wife are both vaccinated. He also sympathizes with the ushers who have a job to do; he just wishes they could be more friendly and understanding about it. A fan of all four Philly sports teams, he particularly loves attending Phillies games with his friends but is not sure when he will be returning.

“It turned in to a terrible experience for my wife and I,” he says. “We hadn’t been out for a year, we come to a game and I felt like I was a kid in school getting in trouble for eating my pretzel too slow. It just wasn’t comfortable and it wasn’t fun. As I told my wife, I’m not coming to anymore games until it’s back to normal. I’m done with spending all this money—they kill you for parking, they kill you for food and drinks and it’s not even a good experience.”

Voorhees resident Joe Adams is similarly a huge Philadelphia sports fan who felt a void in his social life from not being able to attend games. “When everything went away over the past year and a half, it was hard,” he says. “It’s a part of what I do depending on the season, to go there with my family and really not only enjoy the event but enjoy the outing.”

Adams attended a Flyers game in April with his wife and two adult children. He had a friendly conversation with the usher in his section but did not appreciate the constant reminders about masks, which he admits he is not crazy about in the first place.

“If someone wasn’t actively eating or drinking and didn’t have their mask covering both their nose and mouth, they attacked with a vengeance,” he says. “I don’t want to call them aggressive, but they were close to being aggressive in terms of making sure that people were covered completely. Despite the fact that there was no one anywhere near each other, there was a very active ‘police’ presence of the ushers walking up and down the aisles.”

In between periods, Adams got up to stretch his legs and found a secluded place on the concourse where he was checking scores on his phone while wearing a mask. Although he was alone and distanced from other fans, an usher admonished him for “congregating.”

Adams was also one of the few to attend an Eagles game last fall, as the team only allowed 7,500 spectators for three games in October before spikes in COVID-19 cases brought that to an end. He did not enjoy that experience, either, as the usual excitement of an Eagles game was missing and the players looked to be “bored to tears” during breaks in the action.

“Overall, it was awesome to go back to watching live sports,” he says. “It was really comforting that it was somewhat of a return to normal. But the restrictions that are placed, for me, certainly impacted my overall outlook on the event. I haven’t gone back even though I’ve been offered tickets, because I don’t feel comfortable sitting with a mask on for two and a half hours. Sporting events are meant to be enjoyed with cheering and yelling and high-fives.”

Finn is hoping that not many fans share that sentiment, because he wants to see the capacity levels increased to give the Sixers a true home-court advantage as they pursue their first championship since 1983. Even if providing proof of vaccination is mandatory before entering, he would be on board.

“The limited capacity took something away from it for me,” he says. “It was almost like you were watching a practice and there wasn’t as much intensity. I’m hoping they let everyone back in for the playoffs. I thought they were going to originally roll it out where you had to show proof you were vaccinated to come in. I wish they did it that way and allowed for more people to come in. I would have no problem with that.”

Adams, on the other hand, balks at such a proposal, which is being considered at some colleges and universities as a requirement for welcoming students back to campus housing in the fall. “That’s Nazi Germany—you have to show your papers to prove [you’re vaccinated]? No, this is a free country and there are people for religious purposes who don’t vaccinate their children, whether it be measles, mumps, polio, any of that stuff. It is illegal to force people to take vaccinations.”

Wherever one stands on the issues, it is clear that the debates of our times have seeped into sports. The question is how professional leagues will be impacted in the future, and how soon packed houses will be a nightly occurrence again. Kerr has his doubts that will happen unless the teams start to appreciate their fans more.
“The reason I share my experience is maybe it gets back to the right people and hopefully they start to realize what they’re doing to the fans,” he says. “People have now found other things to do during this COVID time. … I think people are starting to take a step back from sports and it’s a shame. I don’t know what’s going to happen. For me, we have nice TVs at home so I might as well stay home and enjoy myself, eat whatever I want and shut it off when they stink.”