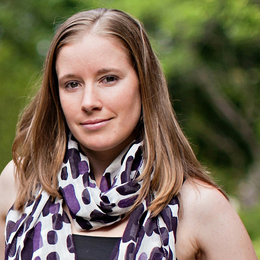 
by Bill Donahue; Photo by April Ziegler
“Choose a job you love and you will never have to work a day in your life.”
Jenni L. Walsh can certainly relate to this truism. She spends her days—and, more often, her nights—in the glow of her computer, dreaming up vivid characters and the tribulations those characters need to grow, learn, and change the world around them.
Walsh, who lives across the river in Yardley, Pennsylvania, once enjoyed a fruitful career as a copywriter in New York and wrote fiction in her spare time. Now she writes novels for a living. Her specialty: historical fiction starring strong female protagonists. In recent years, for example, her novels Side by Side and Becoming Bonnie delved into the largely untold story of Bonnie Parker, of the infamous tandem Bonnie and Clyde.
She wrote her latest book, I Am Defiance, about a young girl trying to find her way in Adolf Hitler’s Germany, specifically for middle-grade readers. We spoke with Walsh about her new novel, the kinds of stories that interest her, and the importance of remembering our past.