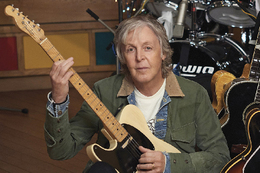 Motivated by the Music
Decades after he took the world by storm and became a cultural icon, Paul McCartney is still having the time of his life.