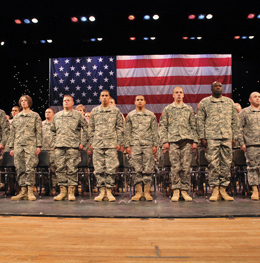 Just weeks after her husband Michael shipped off to his deployment in Kuwait, Marltonâs Melissa Costello is already feeling the strain. The coupleâs 4-year-old daughter Sophia doesnât quite understand why her father isnât home. Their eldest son Demitrius, 15, has suddenly found himself as the reluctant man of the house. And the hardest hit, 8-year-old Isabella, âis more emotional. She cries at night for her daddy,â Costello says.

For the Costellos, the six-month deployment, which began just before Christmas, was not a total surprise. Michael, a former U.S. Marine, had enlisted in the New Jersey Air National Guardâs 177th Fighter Wing in 2000 to take advantage of the G.I. Bill. But, while heâs served overseas before, traveling to Korea and Japan, this is the first time Tech Sergeant Michael Costello has had to leave his wife and kids behind.

âItâs hard,â Melissa says. âItâs constant work. Iâm up early in the morning and itâs all day, running all over the place, school, homework, activitiesâworrying âDid I pay this bill? Did I pay that bill?ââstupid things my husband takes care of, that I take for granted.â

Throughout South Jersey, men and women in the armed forces continue to heed the call of duty this year, as they push off for deployments throughout the Middle East. While the challenges of being sent into action are fairly evident, the general public often forgets the battles waged on the home front. âThereâs the soldier that deploys; then, thereâs the family thatâs left back here to try to keep everything together,â says Medford resident and Army National Guard Major Carmen Marie Tucker, of the 119th Battalion. âI think, in a lot of ways, itâs easier to be gone and be away from home because youâre fixed on what youâre doing.â

That depth of emotion was evident in mid-December at Rowan University, during a farewell celebration for Tucker and nearly 70 other New Jersey National Guardsmen, all shipping out for yearlong deployments in Afghanistan.

A full-time employee of the Guard for the past 22 years, Tucker says this mission to Afghanistanâwhere she will oversee logistical supportâis her first deployment. Unlike some of her peers, she doesnât have children at home. But she does have a husband, Tom, whom sheâll be leaving behind. âA lot of us are married and itâs a partnership,â Tucker says. âYou do the things the other doesnât do. If the other one is gone, you have to fill in the gap somehow, which is difficult because weâre a busy society. The person that stays back ends up picking up the slack. Thatâs what our families will be going through. They have more stress on them.â

The strain can be especially painful for young families, those with small children to care for, mortgages to pay, driveways to shovel and cars to fix. Many of those deploying with the 119th are just starting their families, uncertain of how theyâll face these new challenges.

Among them is Matthew Jablonsky. The Voorhees resident joined the Army Guard in 2007, a year before he graduated from Eastern Regional High School. During the year heâll be in Afghanistan, his life and his job at Harris Tea Company in Moorestown will be put on hold.

Jablonskyâs biggest concern is leaving behind his 19-month-old daughter, Taylor. Jablonsky hopes to stay in touch with his baby girl in any way he can. âFor what itâs worth, weâll have the Internet,â Jablonsky says. âIâm planning on writing a lot of letters to her, so hopefully sheâll learn to read at a young age!â

Melissa Costello, meanwhile, is busy rallying not only her family, but also the community, in support of her husbandâs 177th Civil Engineering Squadron. In December, when Michael and 17 other men and women received assignments to scattered locations in Afghanistan, Iraq and Kuwait, she organized a surprise send-off event at Marltonâs VFW hall. She and others loaded boxes with supplies and goodies for the troops to take with them, and drew support from local businesses and even high school friends who came out to wish Michael and his fellow airmen farewell.

âIt just made me feel good,â Costello says. âI wanted them to feel they are loved and appreciated.â

Still, she says, she wonât feel completely relieved until her husband is back home in South Jersey. âWhen he left, he left everything in order. That was my reality check,â she says. âI think a lot of people donât see the constant worry in your head. It doesnât matter where these men are stationed. Itâs always in the back of your head: âWhat if he doesnât come home?ââ