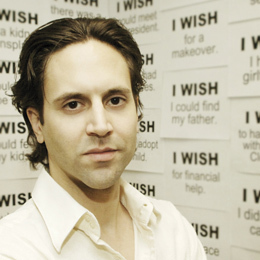 
by Michelle Spevak
Cherry Hillâs Dave Girgenti turned his own wish, to make a difference, into a charitable networking website that connects tens of thousands of would-be philanthropists with people in need.

Jeanette Golden knows what itâs like to wishâto wish really hard. The Voorhees mother of four was used to granting wishes, like that of her adopted son, whom she took in when he had nowhere else to go. But recently she, herself, has been the one in need.

âAfter working 30 years of my life in management, volunteering as a team captain for Relay for Life and giving to my church and many charities, my world fell apart,â says Golden. Within the past four years, her husband walked out; she suffered a debilitating injury; she lost her job and home; and she was diagnosed with several severe chronic illnesses. Her adopted son was struck by an SUV while riding his bike. And one of her other sons was diagnosed with genetic pancreatitis, requiring constant care. âItâs hard to believe all this has happened to one family. But itâs the truth,â Golden says. By this past fall, the medical bills had drained her bank account. Still, she didnât lose hope.

And thatâs when she heard about Wish Upon A Hero, a locally based online organization that connects individuals in need with âheroesâ that can help them fulfill their wishes. From a simple request for a get-well card to an outsize wish for a trip to Disney World or a spare kidney, the site, WishUponAHero.com is a place where miracles happen to average people, performed by average people.

âWhen someone told me about WishUponAHero.com, I could not believe that a site like that existed,â says Golden. âI wrote my wish for someone to help with my rent and heat. All I needed was for us to be able to keep our apartment so we would not be evicted during the holidays.â

On Thanksgiving 2010, Goldenâs wish came true. âI could not express my gratitude enough,â she says.

Goldenâs is just one of 70,000 wishes that have been fulfilled around the world, via WishUponAHero.com. Yet, this global phenomenon started small, a nagging inkling in the mind of Cherry Hill native Dave Girgenti.

Girgenti, a web designer by trade, first conceived the idea in the wake of the Sept. 11, 2001, terrorist attacks. Then, following the devastation of Hurricane Katrina in 2005, he became determined to make his concept of charitable social networking a reality. After two years of scraping together resources and calling in favors, Girgenti launched Wish Upon a Hero in 2007.

Back then, even Girgenti hardly understood the magnitude of what he was taking on. âItâs funny,â he says. âI made this thing and it was just a hobby. I didnât think it would be a life changer for meâ¦. I thought, âIâm making a website.â But I didnât make a website: I built a community.â

That community has drawn in people like Atcoâs Laura Morris, for whom Wish Upon A Hero became a vital part of everyday life. Since becoming a member in 2008, Morris has been âoverwhelmed by the needs posted. I felt both excited to give and humbled by that fact that I was blessed enough to have something to give,â she says.

âIt didnât take long for Wish to become somewhat of an addiction. I found that certain wishes chose me, and none grabbed me harder than those involving children. One of the first wishes [I] granted was for a young family welcoming a little one with no supplies. All of my sonâs baby gear suddenly had a purpose again,â says Morris, a manager at Walmart.

âWhen it came to school supplies, diapers and formula for a newborn, a new outfit for a class picture or even toys for kids who believed Santa would still come through, I found that working for Walmart made it easy to give,â she adds. âI could make a purchase and leave it for a local wisher to pick up safely at the store.â

Morris even inspired her colleagues to follow her lead. Not only have some of them granted wishes individually, but Morris and her co-workers also now grant wishes as a team.

âI think that having a place to help others you may never have known, at any time of the day or night, with whatever you have in your hand as a resource, is exactly what the world needed,â she says. âYou canât say you donât have anything to give, or that you donât know where to donate, or if the charity is taking a cut of the donation. It is the easiest way for us to do what we were designed to do ... help others.â

Girgenti, who now works fulltime growing the website, says the project offers more than a helping hand: itâs an ongoing testimony to the moral fabric of our society. âThe website showcases the kindness and goodness of humanity,â he says. Recent wishes granted include a kidney, a prosthetic eye, a trip to Hawaii for a Pearl Harbor survivor, and a wedding complete with a honeymoon.

Yet, there are plenty of smaller wishes as well, meaning that just about anyone can give. Golden, after making her own wish, began to read othersâ wishes on the site. She ended up donating an extra coat to a woman in need.

Since then she has gone on to grant several other wishes. âThis website is a miracle in action,â she says. âWhen I was at my lowest, it showed me that there are many caring people in this world.â¦ Wish Upon A Hero taught me that I am not alone. There is always hope. It also taught me that even if you think you have nothing to give, you still can help others.â