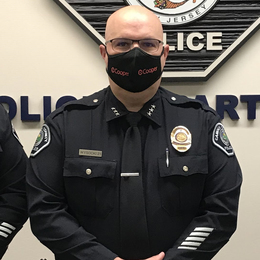 
by South Jersey Magazine
Joseph Wysocki
After serving the community for three decades, Wysocki will retire as Camden County Police Chief in December. During his 30 years on the force, he rose through the ranks to become Camden’s chief of police and was a key figure as the city’s department transitioned to county control. Wysocki also was a member of the FBI’s Camden Violent Crimes Task Force Special Investigations Unit, supervised the High Intensity Drug Trafficking Areas Long-Term Investigation Unit and was the commander of Internal Affairs from 2009 to 2015.
Erin Hartman
This Medford resident has been selected for the Medford-Vincentown Rotary “Coles Roberts Humanitarian Grant.” The Shawnee High School and University of Pennsylvania graduate will begin studying in the United Kingdom after receiving a Marshall Scholarship, an honor that is only handed out to 50 scholars nationwide each year. In the U.K. Hartman will be looking to obtain a dual masters degree from the University of Yorke and the London School of Business and Economics.
Deron Cherry
Cherry, a South Jersey native who was a star football player at Palmyra High School, was inducted into the Philadelphia Sports Hall of Fame during a virtual ceremony on Nov. 5. Cherry was a safety and punter at Rutgers before entering the NFL with the Kansas City Chiefs, where he became a six-time All-Pro safety and recorded 50 career interceptions in a renowned pro career. He later held an ownership stake in the Jacksonville Jaguars.
Lorenzo Carletti
A Cherry Hill resident and senior at Bishop Eustace Prep, Carletti has been named a semifinalist in the National Merit Scholarship Program. About 1.5 million students from across the country annually enter the program, which recognizes academically gifted seniors, and Carletti is one of 16,000 semifinalists this year. He is hoping to receive one of the 7,600 scholarships totaling more than $31 million that will be awarded this spring. Carletti has also enjoyed a standout soccer career at Eustace.
Christian Giudice
Giudice, a Haddonfield native and renowned boxing author, recently released the first biography of legendary fighter Hector “Macho” Camacho. Macho Time: The Meteoric Rise and Tragic Fall of Hector Camacho, is the fourth book by Giudice, who started his writing career as a journalist in South Jersey and now resides in Charlotte, North Carolina. His highly regarded debut on Roberto Duran was turned into a movie starring Robert DeNiro.