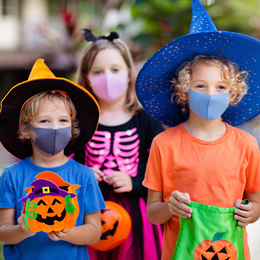 Trick or Treat
As a celebration that naturally encourages the mingling of strangers, Halloween will undoubtedly look different this year, yet those in South Jersey are determined not to let COVID scare them from having a good time.

Continuing fall traditions has been important—they’ve gone pumpkin picking and plan to carve Jack O lanterns. “I’m hoping it’s nice weather on Halloween so we can be outside—that makes me feel safer,” she says. “We just have to keep the kids from hugging; it’s hard and we have to be cautious, but I don’t want them to lose out on the fun traditions we got to do as kids.”