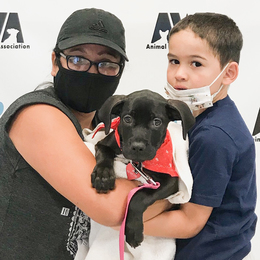 Comforting Companionship
Since the onset of the pandemic, interest in pet adoption is up and local shelters have remained dedicated to caring for homeless animals.


by Liz Hunter
When the world shut down this past March, people found themselves in a state of chaos. Looking for routine, many sought the companionship of animals, and local shelters witnessed an influx of interest in both fostering and adoption.
“We nicknamed them ‘pandemic pets,’” says Maya Richmond, executive director of the Animal Welfare Association (AWA) in Voorhees. “Right after quarantine began, we saw an increase in desire to foster and bring new pets into the home. People were realizing that with more time at home, it would mean an opportunity to spend time and bond with a pet.”
It was especially helpful for older people who suddenly found themselves unable to have visitors, and Richmond says they witnessed those people adopting as well, which in turn provided interaction and a good topic of conversation when on video calls with family members.
Although daily life brought uncertainty about jobs, school and health, Richmond says pets add a sense of routine that feels normal. “There’s comfort in doing something at a particular time every day, like going for a walk with a dog. They give us a reason to do those things daily.”
According to Gloucester County Freeholder Director Robert M. Damminger, although the county animal shelter has reduced its hours, adoption applications haven’t stopped rolling in. “The Gloucester County Animal Shelter specifically has carried on doing everything they can to find individuals the animal that is right for their home. Since the beginning of the pandemic, we have adopted almost 300 animals into their forever homes, 235 animals were released to rescue groups, and fostering opportunities allowed 56 animals to be placed in temporary homes with Gloucester County residents,” he says. As an incentive, the shelter continues to offer discounted adoption fees, and in some cases fees are waived.
The Burlington County Animal Shelter has continued to operate throughout the ongoing pandemic and has succeeded in adopting out 592 cats and 157 dogs since the outbreak began in March, for a total of 749 animals placed.
“While some operations have been adjusted due to the outbreak, the shelter’s dedicated staff and volunteers have continued to provide these animals with the love and care they need and deserve. Through their dedicated efforts, hundreds of pets have been placed in new forever homes, and we encourage anyone thinking about adopting a new companion to contact the shelter and arrange for a visit. Your next best friend could be waiting for you, and during these trying times the love of a pet can be the perfect medicine for the pressures and stress we’re all enduring,” says Freeholder Dan O’Connell, liaison to the County Department of Health and County Animal Shelter.
It has not only been important to find pets new homes during this pandemic, but these organizations are also making concerted efforts to ensure pets remain in their current homes.
The Gloucester County Animal Shelter launched the Pet Food Pantry in the beginning of April with the goal of alleviating the financial stress of purchasing pet food for those who have been struggling due to COVID-19. “We’ve seen a large amount of interest in donations to the shelter,” says Damminger. “Many people send food, treats and supplies directly to the shelter from our Amazon account. Since people have had more time at home, it allows them to start cleaning out their closets which in turn ended up in a lot of linen, towel and blanket donations as well. We’re always receiving donations from our residents and animal lovers which prompted the opening of the Pet Food Pantry.”
Gloucester County residents in need of food can call the shelter to confirm availability and schedule a time for pickup at (856) 881-2828 ext. 3.
Richmond says the AWA rolled out a South Jersey Pet Recovery Plan, drawing from experiences of Superstorm Sandy and the 2008 economic downturn. “We ramped up our own pet pantry, doling out pet food and supplies—thousands of pounds a month,” she says. “We partnered with 10 human services charities such as Urban Promise and Hopeworks to deliver other supplies for families, including arts and crafts. The idea is that we’re helping families beyond just their pets.”
Evictions have also been a concern as many who lose housing are forced to surrender their pets. The AWA has been working on getting the word out about its Neighbors Helping Neighbors program, in which someone facing eviction can be matched up with a volunteer who can care for their pet temporarily until they find a new place to live. “This is something we’ve done for military families and it’s critical for people to know they don’t have to give their pet up to the shelter,” says Richmond.
However, the pandemic has had an adverse effect on the cash donations that organizations like the AWA rely on. With large event restrictions in place, the AWA had to cancel its major summer fundraiser, and the virtual alternative is not expected to bring in the same amount of revenue. This comes in the middle of a capital campaign to raise funds for the AWA’s new 25,000-square-foot shelter and education center. The pandemic stalled construction as well, which adds costs, Richmond says.
Fulfilling the final $500,000 of funding will take creativity, she adds, but it’s not impossible.
“I think when we feel overwhelmed, it’s a wonderful time to have a pet in the home,” she continues. “You have this loving creature who doesn’t judge you and provides comfort and biological endorphins to help you relax. There is nothing better than their unconditional love in turbulent times like these.”