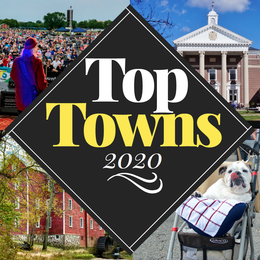 
by Peter Proko
As the world continues to find itself in unchartered territory, we couldn’t think of a better time to celebrate all the wonderful places that make up South Jersey. From the quaint main streets bustling with activity and sprawling parks crawling with families to the desirable school districts and picturesque neighborhoods where curb appeal comes easy; is there anywhere else you’d rather be?
To put together this year’s Top Towns rankings, we gathered data from the New Jersey State Police, the New Jersey Department of Education and the state’s Division of Local Government Services. Using a weighted formula, we combined average property values and taxes, crime incidents reported per 1,000 resident and high school performance numbers consisting of average SAT scores, graduation rates and more. The rankings are further broken down into two categories: big towns (population above 10,000) and small towns (population under 10,000).
Haddonfield once again sits atop the list and it’s certainly earned the recognition. Property values are among some of the highest in the region, the educational system is topnotch and the quality of life and close-knit community offer an idyllic place to call home.
That’s not to say the rest of the towns on the list don’t hold their own. Each is unique in its own way and a destination in its own right. In fact, as we crunched the numbers we found the top five towns on this list were fairly comparable, with only the slightest of distinctions helping to make the difference. That proves that no matter where in South Jersey it is that you call home, you can rest assured you are in the right place.

Looking to Local Leaders
South Jersey mayors discuss how their towns are faring during the pandemic and the plans to reopen and rebuild.