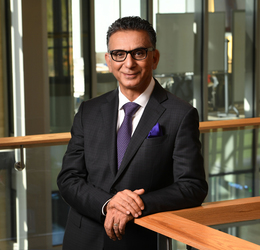 Getting Personal
Rowan Universityâs seventh president, Ali A. Houshmand, on playing soccer until his feet bled, getting an education while washing dishes at KFC and living the American dream.


by South Jersey Magazine
As a child growing up in Iran, one of 10 siblings, we were poorer than poor. We were poor in terms of not having food, in terms of not even being able to bathe, because we didn’t have the money for the public bath.

I dreamed of playing soccer professionally, and as a teen we played constantly. We played barefoot. We played until our feet bled.

Moving to the United Kingdom for my education was difficult. As an immigrant I felt the sting of bigotry and it hurt. But I got through. I lived on $70 a month that my three older brothers sent and what little money I earned frying chicken at KFC.

America was a great unknown, but after earning my bachelor’s degree in mathematics and a master’s degree in mathematical statistics from the University of Essex, a professor suggested I consider moving to the U.S. I received a second master’s degree and a Ph.D. in industrial engineering from the University of Michigan. It was in Ann Arbor that my wife Farah, also from Iran, and I had our two children, who are now grown adults.

College graduates earn on average $1 million more in their lifetime than non-graduates. I am driven to help reduce the cost of, and increase access to, a college degree.

You have to break a sweat. For me, running was always a passion. I’ve run 19 marathons.

Rowan’s two medical schools, Cooper Medical School of Rowan University (CMSRU) in Camden, and the School of Osteopathic Medicine (SOM) in Stratford, will impact health in New Jersey for generations. We started CMSRU in 2012 and acquired SOM in 2013 and both are helping to ease a projected shortage of doctors, especially of primary care doctors.

A public university must be an economic engine. With campuses in Glassboro, Camden and Stratford, our West Campus in Mantua, the South Jersey Technology Park and Rowan Boulevard, a $400-million privately funded development, we’re creating jobs and helping to improve life in South Jersey. We’ve partnered with Rutgers-Camden and Camden County College to develop a life sciences research facility in Camden and, in 2017, we committed $50 million to support research in the city.

Hot sauce, of all things, helped me make a personal impact on our students. After years of growing hot peppers and making sauces for family, we began producing Houshmand’s Hazardous Hot Sauce commercially in 2017. Every dime of proceeds funds emergency student scholarships.

I am proud of Rowan’s transformation. Over the last 10 years, we doubled enrollment to 19,600 students, partnered with community colleges to provide new pathways to a degree and became a national research university, all without losing sight of our undergraduate mission.