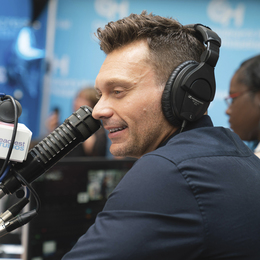 Helping to Heal
Driven by a passion to brighten the lives of sick children, Ryan Seacrest and his foundation give pediatric patients a creative outlet to escape their harsh realities.


by Peter Proko
Ryan Seacrest is certainly no stranger to the public eye. He’s a morning talk show co-host. He has a syndicated radio program. He’s an executive television producer. He replaced Dick Clark as our New Year’s Eve guide. He even has his own array of skincare products and a line of apparel. To say he’s one of today’s most well-recognized celebrities is putting it lightly. Yet, despite his omnipresence, Seacrest’s greatest work may just be what happens when the bright lights are turned down and the cameras are no longer rolling.

Inspired by the opportunity to work with children, especially those who are suffering from a prolonged sickness, Seacrest has always looked for ways to make a meaningful connection. And so, he would often visit the Children’s Hospital of Orange County in California, even going as far as to broadcast his radio show live from its halls.

It was then the light bulb went off. Seeing the noticeable impact his visits had on the kids, he wanted those moments to last forever. To be able to give not only sick children, but their families, a temporary moment of solace was fulfilling, and Seacrest wanted to capture that energy and manifest it into something bigger.

So, more than a decade ago the Ryan Seacrest Foundation was formed with an aim to inspire youth through entertainment and education-focused initiatives. But simply lending his name to the cause and helping raise money was not enough; Seacrest wanted to create something more tangible for the kids to enjoy, something they could use to express creativity in an environment that would help take their mind off their trials and tribulations. Tapping into his passion for radio, he sought to recreate the experience of the live remotes that first connected him with children. In November 2010, the first Seacrest Studio was opened in his native home of Georgia at Children’s Healthcare of Atlanta.

The multimedia broadcast center allowed patients to explore the world of radio, television and more and generated various programming for patients whether they were physically in the studio or watching through closed-circuit television in their room where they are able to call in and make broadcast requests.

The response was more than he could have asked for and less than a year later, the second Seacrest Studio opened at Children’s Hospital of Philadelphia. To date, there are 10 studios across the country with an 11th planned for Orlando Health Arnold Palmer Hospital for Children this year—an announcement he was pleased to share in front of an audience of millions during an episode of LIVE with Kelly and Ryan.

“I have always believed in the healing power of entertainment, but when we opened our first studio nearly 10 years ago, I had no idea the extent of the benefits that these creative outlets could bring to patients and their families,” says Seacrest. “As we work toward opening our 11th Seacrest Studio, we could not be more excited to bring these opportunities to the families of Orlando Health Arnold Palmer and look forward to continuing to provide a positive distraction for patients.”

To help see his vision through, Seacrest leaned on some of the people who know him best—his family. Alongside his father, Gary; and his mother, Connie; Seacrest’s sister, Meredith Seacrest Leach, serves as the executive director and COO.

“We started this as a family,” Seacrest Leach says. “We didn’t know what would come of it, but the way it’s grown … it has been amazing to watch the impact it’s had on families. … If you are going to work with a sibling, giving back is the best way to work together.”

And while Seacrest’s in-demand schedule makes it difficult to be everywhere at once, he remains firmly attached to the cause. He visits the hospitals whenever the opportunity presents itself and he ensures that each studio is receiving the necessary support to be able to make a difference now and well into the future.

“It was really important to Ryan and our family that we didn’t just build a studio, hand over the keys and that was it,” says Seacrest Leach. “Ryan visits the studios whenever he can and helps to arrange for toys, costumes and fun prizes for games to be delivered to all hospitals. The foundation is also fully involved with all technology needs and assistance. He wanted to make sure we were hands-on with our support.”

In addition to Seacrest being the face of the project, his celebrity pals have also lent their time to help brighten the lives of these pediatric patients. Selena Gomez, Nick Jonas and many more have served as ambassadors of the foundation and helped further its mission while making lasting bonds with patients. At any given moment, you may find the children interviewing hip-hop star Ludacris, hearing country singer Jordan Davis strum his latest tune or watching in awe as the Harlem Globetrotters deliver their signature high jinks.

“There are so many moving stories, especially with patients who are in the hospital for a long time,” Seacrest Leach says. “It’s a place for them to go and have fun and the studio team becomes like a family to them.”

One patient who fully embraced the studio and all that it brings was a young boy in Atlanta named Dylan. Despite being hospitalized at Children’s Healthcare of Atlanta in need of a new heart, he showed tremendous spirit and quickly endeared himself to everyone he met. Not only did he manage to graduate kindergarten during his stay, he made lifelong friends. That includes the dozens of celebrities he encountered at Seacrest Studios, interviewing them and creating memorable moments for all parties involved. The studio was a welcomed distraction from the harsh realities he had to endure at such a young age and after 372 days, 6-year-old Dylan finally received his new heart and got the chance to return home.

“[Dylan] went to the studio all the time. He got to meet Shawn Mendes, Lil Nas X, Niall Horan, WWE wrestlers; he interviewed them, he danced with them. All of this helped provide a positive distraction during his long stay. To be able to bring some excitement to his time in the hospital means so much to us,” Seacrest Leach says.

Elsewhere, another patient was struggling with the day-to-day situation he found himself in. Down and out, he routinely refused to do his physical therapy, until one day a visit to Seacrest Studios gave him a much-needed spark. That’s where he began to play games and smile for the first time in quite a while. For once, he wasn’t a patient, he was just a child enjoying the simple pleasures of life. Before long, he was standing up out of his wheelchair and surrounded by nurses with tears in their eyes.

Countless other stories like this exist, each with their own unique background but that share a similar direct effect that the studios have had. There have even been a few patients who frequented the studios during their treatment and now that they are outpatient, they have returned to pay it forward, serving as interns and helping to run the programming.

“It’s been incredible to see former patients become studio interns. They can really relate to what the patients are going through and it’s amazing that their experiences made such an impact on their healing that they still wanted to be involved with the studio,” Seacrest Leach says.

To that end, another exciting aspect of Seacrest Studios is the opportunity it provides area students to gain real-life experience. Having gotten its start at the University of Georgia, studios across the country now work with 100 schools and more than 1,000 interns who are learning the same equipment that Seacrest uses every day.

“One thing that has always been important to Ryan is internships,” Seacrest Leach says. “He started with an internship at a radio station in Atlanta when he was in high school and fell in love with radio. It was really something he wanted to incorporate; taking students and giving them the opportunity to impact young patients during a difficult time. Not only does the studio offer students a meaningful experience, but it provides them with firsthand experience using state-of-the-art equipment and the ability to interview some of the biggest stars that come through.”

Currently celebrating 10 years of Seacrest Studios, the foundation is already looking forward to the next decade and how it will continue to evolve. After Orlando, more studios will eventually follow, perhaps even some internationally.

For now, the ability to expand the reach and touch more lives on a daily basis is incredibly rewarding aspect of the job for Seacrest Leach and one she doesn’t take for granted as the mother of a 1-year-old daughter.

“Recently becoming a mother, I definitely have a new lens that I look through. It was already hard to watch what these families are going through but having a child of my own gives me a whole new perspective. Anything I can do to make a family’s hospital experience better; it makes me want to work harder,” Seacrest Leach says. “To be able to help others as your daily job—if you can call it a job—is incredibly rewarding. I’m deeply moved and brought to tears almost every time I visit one of our studios.”

To learn more about the Ryan Seacrest Foundation, Seacrest Studios internships or how to support, please visit RyanSeacrestFoundation.org