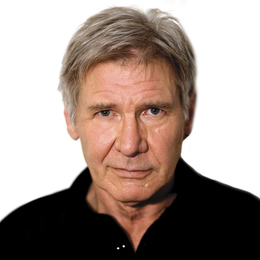 The Big Picture
With an iconic career that has spanned five decades, Harrison Ford would rather focus on what lies ahead than live in the past.


by Evan Jameson
In a business where longevity is only guaranteed for the cream of the crop, Harrison Ford has certainly made his presence felt over the course of the past five decades. Equally comfortable playing either the captivating action hero or the dramatic lead, Ford is at his best whenever the lights are on.

To put into context what a celebrated and skilled actor Ford is, consider that seven of his films have been inducted into the National Film Registry, the organization for preserving movies. That string of films—American Graffiti, The Conversation, Star Wars, Apocalypse Now, The Empire Strikes Back, Raiders of the Lost Arkand Blade Runner—were all released within nine years of one another, which just shows the run of hits he was helping to churn out in the’70s and ’80s.

In addition, Ford starred in six films that were voted for the Best Picture Academy Award—the aforementioned Star Wars, Apocalypse Now and Raiders of the Lost Ark, along with Witness, Working Girl and The Fugitive.

But with the realm of the blockbusters failing to leave his side, even at the age of 77, his current swath of moviemaking is intriguing. In2019, he did his first animated voiceover role for The Secret Life of Pets 2 and his latest film sees him in the role of John Thornton in director Chris Sanders’ adaptation of the Jack Londonnovel The Call of the Wild.

In the film, he stars alongside Karen Gillan in exploring the opportunities and dangers of the great outdoors. It’s an environment not totally alien to the Chicago-born actor—he and his wife, Calista Flockhart, have a house near the Teton Mountain range in the Rockies, east of the Idaho state line.

The switch back to outward bound fodder sets Ford up perfectly for his reprisal of adventurous archaeologist Indiana Jones in 2021, proving beyond a doubt that in the modern, open-minded, politically correct version of Hollywood that evolves more with every new premiere, ambition comes before age.

Ford filled us in on everything from playing iconic characters, what fuels his unwavering work ethic and how he discovered the secret to living a happy life.

So, first, Indiana Jones is coming back. You said the character dies with you, a comment that made a few waves. Do you stand by that?
Err ... what did I say now? [Laughs]. Well, yeah ... I think that it’s the truth. That’s what I think about it and the role itself.

I think when you’ve played a character for a long stretch of movies, and when that character has lasted in that image for three or four, it’s natural for you to think that you are the character—to a certain degree. Obviously, I don’t walk around in the hat, I don’t have a whip and I actually do like snakes. In fact, I have no problem at all with snakes. Indy on the other hand, hates them.

For the first part of your question, on the fact that I will be coming back to play Indiana Jones for the fifth and possibly last time, yeah, that is looking good, so far. I can confirm the rumors and with everything going smoothly, that should be right.

As for the rest, Indy will always be a big part of who I am. That role came at a time when I had done a lot but was looking for a change of tact from the sci-fi stuff, and it really turned me into a much better actor. I am grateful for that.

You’ve never been someone who takes the industry too seriously.
I think a lot of that is to do with the fact I’ve always taken a lot of time out and away from movies. I don’t feel I need to keep feeding this thing and it certainly isn’t the one thing that fuels me and gives me my purpose.

In the ’70s and ’80s I stepped it up a bit, sure, but there’s been a lot of other stuff I’ve wanted to take care of outside of film, so I’ve built a life around that too.

Like what?
I think environmental matters are really at the forefront now and have been for a while. I’m old but it’s really refreshing to see a new breed of young people coming through with a genuine voice, and the ability to raise genuine concerns about the world out there and the change they feel we should be making.

Twenty, maybe even 10 years ago, there wasn’t this strength of movement. I think there is now and that’s good to see. It’s reassuring that the power to change doesn’t just come from movie stars or pop stars or politicians—it’s from real people living real lives, and that fills me with a lot of optimism.

How did you get into acting and what happened with you dropping out of college?
In college, I was studying English and philosophy as a major, but things weren’t turning out exactly as I wanted to or as I expected, and my performance was dipping, and I just had to get out of there.

But how was I going to get out of there and what would I do? Well, I put myself down to start in a drama class and thought that would be the next best step to take in my life. However, that didn’t start massively great, either. You see, like Indiana Jones, I did have a fear—not snakes, but stage fright.

I think it was more down to the fact that I have never demonstrated or even practiced anything to do with acting, speaking or stood up in front of people. But I was determined and I found a way through that. Just as well.

My parents weren’t hugely happy with my decision and even less so with that fact that I was kicked out of college just a matter of days before graduation—which I admit, wasn’t the greatest thing.

My first lines in any film—for which I was an uncredited bellhop boy, by the way—were: “Paging Mr. Ellis, paging Mr. Ellis ... Mr. Ellis.” I walked around a hotel looking for this Bob, or Robert Ellis and it was [played by] James Coburn.

But your career didn’t go off straight away, did it? You were forced to wait for more and bigger roles.
That’s right, I worked as a master carpenter and in fact, after that first film, I was called into an office by a [director] who was just about older than me. He called me “boy,” and he told me that I wasn’t Tony Curtis. I told him I knew that. But he didn’t like that.

He then went on to say that Tony Curtis was a movie star from his first-ever role as a grocery delivery boy and I had a smart comment back to him ... I naturally got told to get out! [Laughs].

I actually did work around Hollywood as a carpenter and thought that was what I was always going to be. Sergio Mendes asked me to do work on his recording studio and it cost $100,000. But what was funny is that it was pretty much the very first time I had done a job of that size and I was working from a book on how to get it right, which thankfully, I did.

You’ve often stated how you have a very strong work ethic and take great pride in getting things done right. Where does that come from?
I grew up in the Midwest in an era when hard work was something that was ingrained in your upbringing. My ancestors were all farmers. I lived in a big city because my father was working in an advertising agency.

My first job as a kid was cleaning snow off sidewalks and driveways. I must have been 8 or 9 years old. And then I learned to mow the lawn. I did all these things to earn myself some extra spending money which I usually spent on chocolate bars and candy.

But the idea of learning to work when you are young and maintaining certain job responsibilities while you grow up is something very typical of the Midwest and it is something that has stayed with me my entire life.

You’ve had a long and varied film career, but in 2019 you found yourself doing voiceover for an animated feature film for the first time in your life. In your 70s. How did that feel?
It was great. I really enjoyed it and I think that’s because it was the first time that I had a chance to work in something animated. When you get to my age you always want to know that there’s something new around the corner.

That’s important—I think the older you get, unless you know the challenge is there, it’s easy to start slipping into a situation where you just live in the present or the past. The secret to life and staying happy is to always be looking at the future.

Call of the Wild is certainly a film full of ambition and experience.
There’s so much wrapped up in it that I had to take it. You’ve got the Gold Rush, a great story about a man and his dog; you have a survival, escape-type theme, and for me the chance to perform all my own stunts going down the rapids [laughs].

Joking aside it was a great movie to do— it is a movie of hope, and I do believe that’s what we all need right now.

It does feel like a sort of prelude to Indiana Jones as well.
If it does that’s unintentional. I think people will quickly realize Indiana Jones is a bit older than the last time they saw him and that won’t need a long intro.

When Sean Connery came in to do The Last Crusade, I remember thinking this was the only time Indiana would really be looking at someone of that age and working that into the whole thing—that was a nice angle we took and it was very original to step up a generation like that.

I now turn around and that older generation is back again—except this time it’s me!