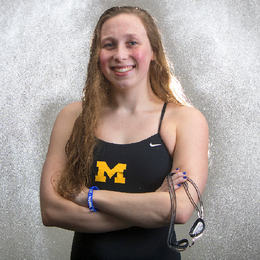 On Top of Their Game
These varsity athletes score big in more ways than one.

Noah Klinewski, Eastern boys basketball
After a breakout junior season in which he averaged 15.3 points, this senior guard has become the leading scorer for the Vikings. An outstanding outside shooter, he will continue his career at Susquehanna.
SJM: Your senior year is off to a good start. What are your goals for this final season at Eastern?
NK: We have a young and inexperienced team given the fact that we graduated most of our [key players] from last year. We’re trying to have a winning season and a 20-win season. Overall, we just want to learn and get better. Personally, my goal is to reach 1,000 points this year—it’s going to be close. But I just want to get better and have fun.
SJM: Last year was a breakout season for you. Did you know all along you could play like that at the varsity level?
NK: I always had confidence in myself. From the start, I knew I could step up and play with anybody. I think last year was a good statement to prove what I can do.
SJM: Eastern’s schedule is loaded with tough competition. Do you embrace that?
NK: Oh yeah. Here and there I wouldn’t mind [some easy games], but it’s always nice going against the toughest teams every night in Group IV and the Olympic Conference. It helps you get better.
SJM: You come from a family of basketball players, including your older brother Matt and your mom Joyce. Did you know growing up that you were going to become a basketball player too?
NK: Yes. From the start, I always had a ball in my hands and I was following my brother to his tournaments and games. I was always that little kid dribbling and running out to the court during halftime and the end of quarters, asking the ref for the ball so I could shoot. I was always training with my brother and competing against him.
SJM: Did he have a big influence on you?
NK: Definitely. He and my mom paved the way and showed me how to play the game that I love.
SJM: Do you ever get mad that you don’t have the same height as Matt, who’s 6-8?
NK: Oh yeah. [Laughs] It was rough to realize I wasn’t going to be as tall as him. I wish I was 7-foot every day; I think it would make the game much easier. But I kind of learned how to work around it when we played one-on-one. I don’t think I’m the smallest in the family anymore—I think I’m taller than my mom. I’m around [6-3], and a lot of people tell me that I’m really tall, like if I’m in the grocery store or something. But around my family, I just don’t feel like it. My brother is 6-8, my dad is 6-4 and my mom is 6-3.
SJM: What made you commit to Susquehanna?
NK: The coach was really active in talking to me and when I went up there to visit, he was really nice and the players were nice. The school is great and the location is nice. It was just a great all-around experience and it felt like a perfect fit. They also have my major—I like business and accounting and I’m interested in that aspect.
SJM: Which basketball players do you like to watch?
NK: That’s a tough question. Obviously, LeBron James is always a good player to watch because he does all of the fundamentals and he can play every position. He’s arguably the best player to ever play. It’s funny, because when the Warriors and Cavaliers were in the NBA Finals all those years, my brother would always root for the Cavs and I would always root for the Warriors. I like Steph Curry too because he can shoot the ball so well and he’s a good point guard, and I’m a point guard too.
SJM: If you could pick four South Jersey guys to run with in a pickup game, who would you choose?
NK: The first name that comes to mind is [Camden’s] Lance Ware, because he’s big and he’s going to Kentucky, which is amazing. There’s a bunch of great guys so it’s really hard to pick. Gavin Gibson from Cherokee would be a good one, and I’d have to say Taj Thweatt and Jahlil White from Wildwood Catholic too. I think that’s a solid five.
SJM: What do you like to do aside from basketball?
NK: I like to go down the Shore, I like to go fishing. I like to play soccer too. I played all through high school; this year was my first year playing varsity and I made third team all-South Jersey. When I was younger I played on this [club soccer] team out of Medford and we were the No. 1 team in the nation. I actually played with Brenden Aaronson, who’s now on the Union. I’m really good friends with him and it’s crazy to see what he’s doing.
SJM: What Shore down do you visit?
NK: Cape May. My grandparents had a house and we inherited it. My dad has a boat and we like to go fishing. It’s a nice way to relax and get away from everything.
To read the digital edition of South Jersey Magazine, click here.