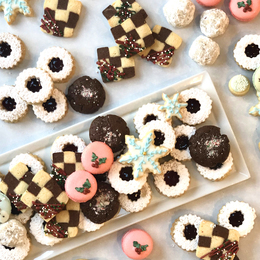 A Matter of Taste: Foodie Guide 2020
Our annual culinary guide for food lovers.

Say Cheese
How to venture beyond the basics.
If you’re like us, you have a love affair with cheese. Aged Gouda, creamy goat, fresh mozzarella; we love it all. But, unfortunately, quality cheese carries the same connotation as fine wine; that its complex appreciation is solely reserved for haughty gourmands.
Hunter Fike has dedicated his life to breaking down those stereotypes and connecting the customer to a world of cheese they never knew existed. Fike has been around the business since he was a teenager when he started sweeping floors at the famed Di Bruno Bros. location in Philadelphia’s Italian Market. Today, he manages the company’s cheese and charcuterie categories and has final say on all new products.
“Other kids had chips for snacks, but [my family] always had asiago and grapes,” he quips.
Fike filled us in on the nuances of the cheese world and even shared some of his favorite varieties for those looking to expand their horizons.
A Better Understanding
“First of all, what makes for a good cheese is whether or not you like it,” says Fike.
Fike says a good identifier of quality is the price tag and he advises gravitating toward cheese that is handmade by the producer as opposed to being made along a production line. “If you see an advertisement for a brand of cheese on TV, it’s not as good as the cheese your local farmer is making,” he says.
For those looking to discover something new, Fike suggests visiting your local cheese shop and sharing which styles you are fond of and then asking the person behind the counter to steer you in the direction of something similar.
“I wish more customers did this,” Fike says. “Please come up and say, ‘Help me.’ We live for customers like that. Start by saying, ‘Here’s what I like, where do I go from here?’
“If a customer says they like Parmigiano-Reggiano, I’ll first ask them what they like about it. If it’s because of it’s sweet, nutty flavor or crystallized texture, I may steer them toward an aged Gouda. But, if they want it because it’s a classic grating cheese, I’ll show them something that matches that.”
The Aging Process
In some cases, aging cheese is a necessary tool. And in other cases, it’s nothing more than a carefully used marketing tool. “Be wary of any cheddars that say they are aged 10 or 15 years. Oftentimes, those cheeses are cryovaced and frozen and are barely aging at all,” warns Fike.
Fike also cautions that extra age on cheese doesn’t necessarily mean it’s of better quality. It truly comes down to the particular styles. “Handmade cheese, more artisan-produced cheese; that will develop more flavor and nuance in one to two years at most,” says Fike. “Brie, fresh mozzarella, fresh goat cheese … those are higher-moisture cheeses that go bad quickly, so you don’t want them to be old. Pecorino, parmesan, Gouda; they have lower moisture and need to be a year old before they develop the right amount of character.”
Recommendations
If you were to poll several cheese experts as to what their favorite style is, Fike says an overwhelming number in the industry would say washed-rind cheese. Decidedly not for newbies, the cheese is similar to brie, but the rind is washed with a brine solution that promotes bacteria and plenty of funky odor.
“If you want an entry way into washed-rind cheeses, Taleggio is really great for snacking or melting on a burger or in a risotto. It’s really wonderful and a versatile cheese,” says Fike.
Montgomery’s Cheddar is another favorite—so much so Fike named his son Montgomery eight years ago—as well as Colston Bassett Stilton, which has been produced in England for more than a century, and Fiore Sardo, a pecorino that is lightly smoked over balsam wood.
“One of the most fun things to do is to make a party out of [exploring new styles of cheese]. Buy a bunch of different kinds of cheese—one from every major family—and wine; put out some honey, some charcuterie items and set them on a table and let everyone take notes on what they like,” says Fike.