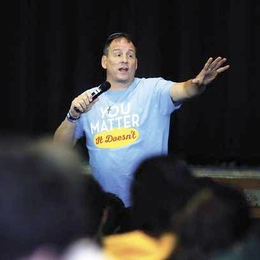 
by South Jersey Magazine
Bobby Petrocelli
As a motivational speaker, author, educator and coach, Petrocelli travels across the country telling a story of tragedy in hopes of educating the younger generation about never taking a second for granted. Through his You Matter Movement, Moorestown High School students had the chance to learn from Petrocelli’s tragedy of a drunk driver crashing into his home in the middle of the night, killing his wife and changing his life in a matter of seconds.

Emily Morgan
As the founder and CEO of Delegate Solutions, Voorhees resident Morgan has been named the Chamber of Commerce for Greater Philadelphia Small Business Person of the Year. As a mother working full-time herself she wanted the ability to be home with her children, which fueled her desire to start her own business. Morgan focuses her efforts on reshaping the traditional workforce through providing professional, flexible employment and helping other businesses do the same.
Gaurav Sharma
Sharma, a minimally invasive general and bariatric surgeon with Virtua Surgical Group in Moorestown, was named a diplomat of the American Board of Obesity Medicine. During his residency, Sharma witnessed how patients’ lives changed from weight loss and bariatric surgeries, gaining confidence and happiness, something that Sharma wanted to continue. His main focus is to encourage doctors to conduct motivational interviewing, which helps steer patients toward making informed decisions about their health and lifestyle.
Floyd Hazzard
As a veteran of the police force and a school resource officer with the Burlington Township School District, Hazzard has been recognized for his efforts and service to the Burlington Township Municipal Alliance in drug and alcohol abuse prevention and education. While also being named as the Burlington County Volunteer of the Year, Hazzard has a strong relationship with the school district, noting how every school requires a different approach toward their education and outreach programs.
Siobhan McVay
President Donald Trump honored Delran High School science teacher McVay with the highest honor given by the U.S. government to kindergarten through 12th grade teachers. McVay traveled to Washington, D.C., to receive the Presidential Award for Excellence in Mathematics and Science Teaching and the Presidential Awards for Excellence in Science, Mathematics and Engineering Mentoring.
Michelle Rohan
Moorestown resident Rohan traveled to the Philippines through the Gift of Life International organization to help children receive treatment for congenital heart defects. Rohan had a special connection with the mission because her own daughter passed away shortly after her birth from a congenital heart condition in 1999. She is the reason Rohan acted as a Rotary team leader, representing the U.S. during this mission.