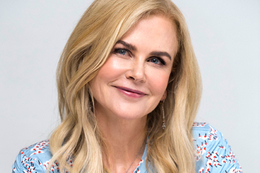 Nothing to Lose
With a heavily established career and a settled home life, Nicole Kidman prefers to just go with the flow.