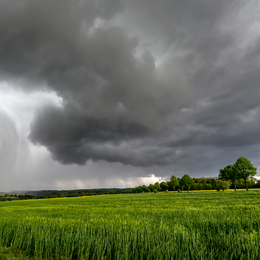 Taking The Temperature
Unseasonably warm days. Record precipitation. Tornadoes. The experts fill us in on what is going on with our weather.


by Julie Shannon
When record rainfall blanketed the area this past summer, it likely dampened your outdoor plans, but many probably never gave it much of a second thought. But tornadoes? That is something we don’t normally associate with South Jersey. Yet in mid July, two tornadoes touched down in Mount Laurel in a period of five days, one of which carried wind speeds of 90 miles per hour and caused significant damage to nearby residences.

While news reports of devastating tornadoes are generally something you see coming out of an area like the Great Plains, our area is no longer a stranger to this type of severe weather. So, is this a new phenomenon or has the growing connection people share through social media and the 24-hour news cycle contributed to these events getting more widespread coverage? According to the weather experts we spoke with, the answer is a mix of both.

“I don’t believe that the rash of tornadoes this year indicates that New Jersey is the new ‘tornado alley,’ but higher water temperatures, higher dew points, creating more moisture in the atmosphere and warmer nights contribute to a higher change of severe thunderstorms,” Tynan explains. “And that translates to a higher chance of tornadoes, especially in a pattern that we experienced this past spring and summer, with high winds aloft.”

It wasn’t just New Jersey that saw its number of tornadoes rise this year. Kate Bilo, chief meteorologist, CBS3Eyewitness Weather notes Pennsylvania, which usually sees 16 tornadoes a year, had over 30 touch down.

“This type of active year cannot be accurately attributed to any one thing,” she says. “Certainly, the rise of social media and better reporting and dissemination of weather information brings these events to the forefront of the public’s consciousness. And it’s not the first time our region has had a year with many more tornadoes than average. But years like this year are anomalies, and it’s tough to determine the cause. This year, an active jetstream was overhead for a longer duration than normal.”

The number of tornadoes doesn’t immediately concern Glenn “Hurricane” Schwartz, NBC10 First Alert Meteorologist. He says higher intensity tornadoes hitting our area are a result of when there’s a prominent change in the weather pattern.

“Seeing EFO and EF1 tornadoes [the smallest on the Fujita scale, which measures tornado intensity] in New Jersey doesn’t have a big impact to me—many straight-line winds cause more damage,” he says. “But if we start seeing EF2 or EF3 tornadoes, then we’re talking about a significant change.”

“Time will tell if this is a long-term trend or just a one-year occurrence,” Tynan says.

In addition to tornadoes, South Jersey also saw more precipitation and rising temperatures throughout the summer and into the fall, including unseasonably warm days to start October. One of the reasons for the higher temperatures is said to be our proximity to the ocean.

“The nighttime temperatures have risen more than the daytime temperatures,” Tynan says. “This is what’s pushing up the average. … Part of what makes New Jersey so susceptible to [the rising temperatures] is that it’s next to the Atlantic Ocean, which is warming.”

“Records for warmth are being set in many places across the globe,” Schwartz says. “… Being next to a warming ocean is a key factor [for this area]. It also provides more moisture for storms, so it rains harder when it rains, and snows harder when it snows.”

But Bilo says the rising temperatures in this area started long before the summer, citing recent studies conducted by The Associated Press and The Washington Post with climate data from the National Oceanic and Atmospheric Administration (NOAA.)

This shift over the years is a big reason why this is affecting the Northeast during the winter more so than other parts of the country.

“Winters are becoming less and less harsh, with average temperature deviations rising more during the winter months than any other time of year,” Bilo says. “Without extensive snow cover to cool the Earth’s surface, temperatures stay high even in the winter, yielding those higher average temperatures. This effect has been noted mainly in the Northeast, where increasingly, even when we get large snowstorms, the snowpack doesn’t remain on the ground for long due to increased temperature swings.

“While you cannot attribute any one event or even any one year to an overarching climate pattern, we can say that it seems likely that as average temperatures continue to rise the number of extreme weather events like tornadoes or flash flooding will as well.”

Joe Miketta, meteorologist with the National Weather Service (NWS) in Mount Holly, says some of the rising temperatures have to do with climate change and because of the different equipment and ways they measure temperatures now compared to years ago.

“There are different types of equipment, some of it is a little more sensitive than it may have been 100 years ago,” Miketta says. “We try to take some of that into account when coming up with measurements and looking at climate change; trying to adjust to any kind of bias that may exist with the certain types of equipment. … Some of the [temperature changes] is due to human activity. With all that said, it’s a big combination. Climate change is based on some of what’s happening because of human activity and because of the natural variability. And because of that we are seeing a change.

“We’ve also experienced greater precipitation, including seeing more tidal flooding in coastal parts of the state. We’re getting it all and have to figure out a way to deal with it.”

Tynan won’t pin the weather changes on climate change. “As a meteorologist, it is fascinating to track these patterns and uncover the atmospheric triggers. But I am very careful not to blame every strong storm or short-term weather trend on climate change,” she says. “Weather is day-to-day. Climate is over decades and centuries.”

With the eventful weather in recent months, what does that mean for the winter? Are we in for a frigid winter with lots of precipitation? Just about all meteorologists are still in the process of putting together their long-range winter forecasts and are asking themselves the same questions we are.

“We can look at signals and past years to give us guidance, but really it’s better to stay alert with the fluid winter forecast as the season wears on and forecast in smaller chunks,” Bilo says. “I do think that as with previous years, winter’s cold may have a sluggish start—it’s feeling more and more like our true winter months in this area now are January, February and March, with the cold slow to come in during the month of December. It may be a volatile winter, but the question is, will our storms yield mainly snow or mixed precipitation?”

“I’ve specialized in severe weather my entire career, and it’s clear that the weather has become more extreme in recent years,” Schwartz concludes. “And that trend will surely continue.”