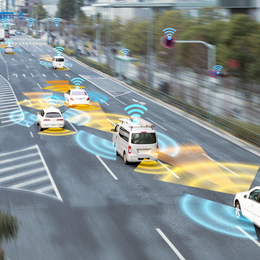 Autonomous Future
With new legislation put in place, New Jersey is at the forefront of getting driverless vehicles out on the roads.


by Lauren Kubiak
It’s the wave of the future—maybe not so advanced as floating cars or teleportation devices, but autonomous vehicles (AVs) are no longer a bizarre concept when it comes to New Jersey’s roadways. Think about it, even your car now has autonomous features from cruise control to lane assistance, and although it seems unnatural to let an automated system take control, AVs are exactly what New Jersey legislators and experts are hoping to get on the roads.

Weaving AVs into Legislation
At the end of 2018, a bill passed allowing the testing and use of AVs on state roadways under certain conditions. The bill also sets the requirement that a person must be present in the driver seat and the AV technology must give the option to be disengaged by said person. The vehicle must also be fully insured, include a safety alert system—which tells the driver if autonomous features are failing—and include a mechanism that stores data 30 seconds prior to a collision in order to study the data.

“New Jersey roads are so congested that it was really important for us to set the standards about how autonomous vehicles can be tested on our roads; where they can be tested; [and] how they can be tested because they are going to be driving alongside fully, well-driven vehicles by individuals,” Assemblywoman Pamela Lampitt, a Cherry Hill resident and the main sponsor for the bill, says. “People on the road need to know that an autonomous vehicle is potentially on the road around them as well. It’s kind of like a student driver. I think it’s important for all of us to know when the student driver is on the road and what do we need to do to be cautionary about it.”

A more recent bill was passed in March establishing the New Jersey Advanced Autonomous Vehicle Task Force which will create a study of autonomous vehicles and recommend laws, rules and regulations. The task force will consist of eight members including the commissioner of the Department of Transportation, the chief administrator of the New Jersey Motor Vehicle Commission, the director of the Division of Highway Traffic Safety in the Department of Law and Public Safety and five members appointed by Gov. Phil Murphy who have an expertise in AVs and highway traffic safety.

First and foremost, Lampitt is concerned with gathering data from the research studies the task force will perform. She previously set the provisional driver’s license curfew to 11 p.m. after gathering data from the Department of Transportation supporting her statement that it wasn’t safe to have younger drivers on the roads past 11 p.m.

“We really utilize the Department of Transportation data to set the changes, and right now we don’t want to shoot from the hip with anything,” she says. “I think that the two measures that we’ve set forth really laid the foundation and the groundwork for understanding the next thing that needs to happen.”

A Safer Outlook
The Department of Transportation reports that 94 percent of fatal car accidents are caused by human error. In order to reduce this statistic, driverless vehicles would need to be almost, if not completely, the only type of vehicle on the roads.

AAA is committed to being at the forefront of this technology and getting the information and data on how AVs will impact the roadways and the environment. As a result, AAA South Jersey is conducting research studies on autonomous vehicles funded by its AAA Foundation for Traffic Safety, and David Antrilli, CEO of AAA South Jersey, says AVs are the future, especially when it comes to safety on the roads.

“Let’s suppose 90 percent of the cars on the road were fully autonomous, Level 5. That would actually reduce the number of accidents,” he says. “[Accidents] would fall from 6 million a year to 1.3 million a year … approximating that means deaths from those accidents would fall from 33,000 to around 11,000. … There are huge benefits—lifesaving benefits.”

However, most cars on the road today have autonomous features up to Level 2, which includes cruise control, lane centering and self-parking, but the driver needs to be ready to take control at any point during that time.

Lampitt says the knowledge of the task force will be a huge part in facilitating what will come next in regard to Level 5 automation in New Jersey and safety is another factor behind the time it will take to getting these vehicles on the road.

The benefits span outside of the realm of safety, too. Antrilli notes that there are environmental benefits that come with this new technology. “In my research there will be steadier traffic patterns—eliminating unnecessary acceleration,” he says. “Cars will self-diagnose themselves; there’ll be less breakdowns. They say autonomous and electric cars likely will go hand in hand so that will reinvent the vehicle and reduce emissions.”

While there are benefits to autonomous vehicles, there are some challenges Antrilli sees with integrating the cars onto the roads as well as incorporating “ethical” driving, which only a human would be able to offer.

“I think the biggest challenge is going to be to infuse the autonomous vehicle with the current manually driven vehicles,” he says. “It’s not going to be a day where all of the vehicles on the road are going to be autonomous. They’re going to have to exist together. … The average age of a vehicle on the road now is 11 years old, so there’s going to be a slow adoption.”
With the intention of getting these vehicles on the road, and being used, a lot of public trust is involved, which Antrilli says will be another mountain to climb. No matter how great the sensors can detect surrounding objects or how much they’re configured (faster, consistent and motion free), there will still be accidents from time to time.

The Deloitte Global Automotive Consumer Study surveyed more than 25,000 consumers across 20 different countries and found that the trust factor continues to slip. In 2018, consumer trust was at 47 percent and decreased in 2019 to 39 percent due to recent accidents from testing on public roads. Companies testing vehicles in closed environments such as airport shuttles/terminals targets a small, concentrated perspective and once that’s proven to take, can slowly move to larger demographics to rebuild consumer trust.

As for the ethical decision-making of the vehicle, AVs are nonhuman so their actions are based from a computer-generated response.

“What happens if the vehicle either hits the car on the left or hits the bicyclist on the right, how does it know what decision to make? Those things are kind of scary because what is the right decision?” Antrilli says. “If you’re human, you’re about to crash into someone, you swerve one way or the other, how does the machine make that decision? To me that is probably the biggest dilemma and you can’t really have software think exactly like a human.”

Looking Ahead
NJ Car is a statewide trade association that represents New Jersey’s 510 franchised new car and truck retailers. The trade association has a mission to advocate for the new car retail industry and played a role in observing the task force bill and is a supporter for autonomous vehicles in general.

“We live in a time when technology sometimes outstretches the ability of public policymakers to carefully regulate [and] protect the public interest,” says Jim Appleton, president of NJ Car. “I think that’s what this task force is meant to do is to drill down and get a better understanding about what is and what is not feasible and how public policy should be shaped around that.”

Appleton says although testing has been going on for a decent amount of time in New Jersey, he doesn’t think we’ll be seeing AVs driving beside us on the highway anytime soon. “I think it’ll be another decade that testing will go on. If you read the comments from the serious players in the AV world, what they’ll tell you is, they’ve got 80 percent of it down but that last 20 percent could take a long time to straighten out,” he says. “Then we’ve got to look at the difference between developing the technology and making it reliable and then developing a service and scaling up a service that is both safe and effective and reliable and beats all the legal and regulatory compliance issues that are going to come into the [force].”

But when it does become commonplace for AVs to be on the roads, Appleton, Antrilli and Lampitt all agree that these vehicles won’t be individually owned just yet. Whether it’s tractor trailers that become the first on the road to haul product, fleets such as Uber or Waymo or public transit, any one of these options could occur before seeing every person own a driverless car.

When that time does come eventually, Appleton believes retail car dealerships will play a significant role in the AV world.

“The autonomous vehicle revolution is a technological revolution that doesn’t really address where the rubber meets the road issues in fleet management and fleet deployment,” he says. “While the technology may allow vehicles to operate without drivers, at some point in the future it won’t allow those vehicles to operate without the need for maintenance and without the need for routine logistical support.
“We use our cars 15 percent, some people heavily maybe 25 percent of the time, the rest of the time it sits in our garage,” Appleton continues. “In an autonomous future, those vehicles will be utilized probably 50, 60, 70 percent of the time which means it’s a durable product that wears out. … For the car dealer whose real business is maintaining and servicing vehicles, as well as selling new and used vehicles, the opportunity to see vehicles turn more frequently creates more revenue opportunities for the franchise/new car dealer.”

Although authority figures and experts think we’re 10-15 years away from seeing big changes in how we utilize autonomous motor vehicles, there’s no denying that AVs will be hitting New Jersey roads in the future. Taking into consideration the benefits and challenges of putting these vehicles on the roads, there’s a hope that the outcome will ultimately improve safety and lives.

Autonomous vehicles aren't even here yet, but get ready for flying cars. Although the idea of creating a flying car isn't new, researchers and scientists have been experimenting with innovative ways to get vehicles in the air and have yet to be successful—until now that is.