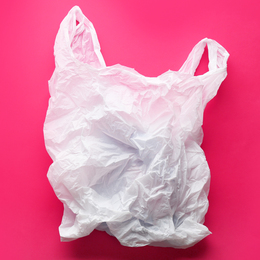 A Ban on the Bag
Cities and towns across the country are prohibiting single-use plastic bags while the Garden Stateâs bill is sitting idle in the Statehouse.


by Lauren Kubiak
After you take a seat at your favorite local restaurant and order drinks, you might notice an up-and-coming movement yet unusual change once you see the straw—it’s made out of paper. While not every restaurant is on board with paper straws, they have become more noticeable in South Jersey and the only option for restaurant goers in Shore towns.

Aside from the ridding of plastic straws, the backbone of legislation under consideration is a ban on single-use plastic bags in cities and towns in New Jersey. It all began last summer when bill sponsor Sen. Bob Smith, head of the Senate Environment and Energy Committee, and other lawmakers in Trenton proposed a bill to Gov. Phil Murphy to place a five-cent fee on plastic and paper single-use shopping bags. Although Murphy thought the bill was well intentioned, it wasn’t up to par with his standards of a strict policy, and as a result, the bill was vetoed.

Murphy wanted the bill to resemble California’s statewide ban prohibiting plastic bags and a fee for paper bags. Now Smith is amending the bill that would ban single-use plastic bags, plastic straws, polystyrene food containers and possibly paper bags from all restaurants and retailers in the state. Violators could potentially be charged a fine of up to $5,000 for each offense.

If the bill were to be approved, it would make New Jersey one of the top states (aside from Hawaii, which has a proposed Senate bill of banning nearly all plastic items from restaurants) that has the toughest statewide plastic and Styrofoam ban in the country.

While legislation stays inoperative in the Senate for now, towns in South Jersey have already taken the first step toward an anti-plastic state, and Shore towns specifically have already put the ban into effect this past summer.

Avalon’s ban (eliminating the practice of merchants using single-use plastic bags, plastic utensils and Styrofoam containers) went into effect in June—prime season for vacationers. The ban is a part of the Avalon Clean Water Initiative which attempts to remove plastics from waterways. Scott Wahl, Avalon’s business administrator, says there has been a lot of positive feedback from businesses regarding the ban, even though they’re feeling the brunt of the change.

“The biggest adjustment for the merchants was discussing with their suppliers alternatives that would satisfy the terms of the ordinance,” he says. “Some of these other materials, in some cases, are more expensive but all of the merchants understand what we are trying to accomplish and become a greener community.”

As for the general public, Wahl says the majority of people understand and are in acceptance of the legislation. The town has implemented Terra Cycle containers at select locations in the borough to drop plastic bags, which are sent to a company that guarantees every bag will be recycled. It’s typically assumed that throwing plastic bags into the recycling bin will automatically get recycled, but they are usually sent to the general waste system because of recycling parameters (a plastic water bottle with a lid cannot be recycled, for example).

Wahl mentions that Avalon hasn’t seen any issues so far with the ban in place, but realizes there’s potential to modify the ordinance if excessive hardships were to occur on businesses. The council would consider new products that could help the businesses financially.

“About 50 or so municipalities throughout New Jersey, including South Jersey coastal towns, have enacted or proposed competing disposable bag bans or fees with different requirements, definitions and effective dates that include all types and sizes of retailers, small businesses and restaurants,” Doherty says. “This has created an onerous and unworkable patchwork of local ordinances for all merchants who have established businesses in these communities throughout the state. It also causes confusion amongst customers who shop retailers in different towns.”

Because of the competing bag ordinances, the New Jersey Food Council has called on local town officials to support a consistent statewide single-use bag resolution. “No one wants 565 different town ordinances regulating how consumers shop,” Doherty says. “We believe reducing waste statewide is a good thing but a zip code should not dictate disposal bag policies.”

Doherty also says there should be one exception to this ban, and it involves raw meat. For food safety reasons, plastic bags should be used to separate and prevent poultry, beef and other food items from damaging or contaminating other produce.

Other organizations have a strong opposition to the plastic ban. The American Plastic Bag Alliance (APBA) represents the plastic bag manufacturing and recycling industry in the U.S. and acts as the “defense” against the bans and taxes across the nation. The APBA has had a keen eye on Trenton’s legislation and has engaged in conversation to bring to light consequences legislators and the public might not be aware of when it comes to banning plastic bags.

“We’ve got tens of thousands of workers here in the United States that manufacture plastic bags,” Matt Seaholm, executive director of the APBA, says. “So if you were to ban the products and there’s no longer a market for them, as you can imagine their jobs could potentially go away.”

A statewide litter study was conducted last year by the New Jersey Clean Communities Council and it was found that of the total materials that make up the litter stream, only 0.8 percent are from branded plastic bags.

“Even if you were to ban those products entirely, the best case scenario is that you’re going to reduce the litter stream by that [0.8 percent] and at the same time you’re going to increase costs on retailers and the customers by millions and millions of dollars,” Seaholm says.

Dennis Hart, executive director of the Chemistry Council of New Jersey, is involved with polystyrene (Styrofoam), food containers, straws and plastic cups and agrees with Seaholm that there should be a common ground that won’t have such an impact on the economy. The Chemistry Council is promoting recycling and new ways to enhance recycling of these materials.

“If [lawmakers] were to ban the polystyrene food containers, right away schools in New Jersey would be in a tremendous hardship,” Hart says. “A lot of the public schools in New Jersey already were hit with state aid cuts in the last year’s budget, and they’re struggling. They’re doing layoffs; they’re trying to see how they’re going to balance their budgets. If they had to replace their cafeteria polystyrene trays or food containers with cardboard or something else, the cost would be tremendous for them.

“Food service is a marginal business,” he continues. “They’ve already been hit this year with minimum wage increase, higher corporate business taxes; it’s difficult enough to do business in New Jersey. You add more cost to a marginal business and it’s definitely going to be seen on the bottom line.”

Aside from these potential effects, towns are continuing to put in legislation in lieu of the state’s final decision. Last month, Collingswood approved several sustainable-focused ordinances from a ban on single-use plastic bags to prohibitions of public smoking/vaping and vehicle idling. While the ordinances still have a public hearing and delayed effective date, Mayor Jim Maley says the Collingswood Green Team has been working long and hard to develop this legislation.

“For the last year, year and a half, we’ve been doing a pretty active education campaign especially at our farmer’s market trying to encourage people to bring their own bags,” he says. “In fact, we’ve kind of got the farmers [to] ask if you want the [reusable] bag just to try to remind people. Now this [ordinance] is the next step that makes it more official.”

So while the bill continues to be revised and await approval, towns will continue to move forward or consider putting the plastic bag ban into effect.

“This is the future; using recyclable products to help the environment. People used to throw trash out of moving vehicles and smoke in airplanes. Both sound preposterous now,” Wahl says. “Many states, towns and private entertainment locations are joining this movement and we need to be stewards of the environment, to the best of our ability. We can do better than bringing home a sandwich in a plastic bag and then tossing the bag away—and we are.”