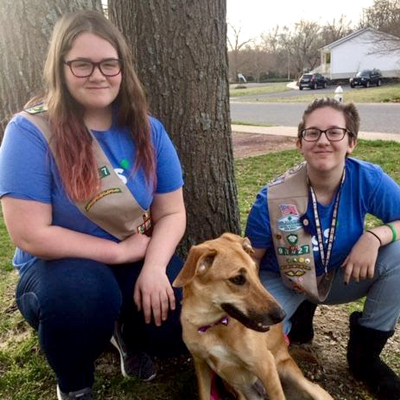 
by South Jersey Magazine
Emily Benfield and Emily Hess
Benfield, of Pittsgrove Township, and Hess, of Elmer, received a Girl Scout Silver Award which is the highest award a Girl Scout Cadette can achieve. The two created a pet safety awareness program in their community inspired by the passing of Hess’ pet in a fire. The program helps reduce the risk of it happening to another family by handing out information on how to keep pets safe around fires and in emergencies.
Bryana DeMonte
DeMonte was recently given The College of New Jersey’s School of Education Staff Member of the Year Award. She is the academic coordinator of the career and community studies program, which is a college-based certificate program for young adults with intellectual disabilities. The Voorhees native supports her students by accommodations in accessing and successfully completing coursework.
Dr. Ari Brooks
The Cherry Hill resident was the recipient of the 2019 Jamie Brooke Lieberman Remembrance Award by Susan G. Komen of Philadelphia, which selects an activist in the area who demonstrates an eagerness to end breast cancer. Since 2002, Brooks has been receiving funds from the Komen Philadelphia community grants program for his breast health outreach. He enjoys getting to know the women who put up a fight when it comes to breast cancer.
Sarah Baldwin
Baldwin is a Mantua resident who illustrated and wrote Twitcha, a comic book about a teenage superhero with Tourette syndrome (TS). The book was inspired by a group project at the NJCTS Tim Howard Leadership Academy at Rutgers University, which promotes self-advocacy and self-leadership for those with TS. Twitcha will be used by NJCTS for presentations to elementary students with a plan to incorporate the book into lesson plans.

Danielle Patrice
Patrice, a Willingboro native, is co-founder of the New Jersey Domestic Violence Movement, a new organization with a mission to restructure the way the legal system handles domestic violence. Not only does the group advocate for victims and spread awareness, but it takes donations for kits that include toiletries, blankets, gift cards, diapers and wipes to help victims.
Ilana Ellis
Ellis is a Haddonfield resident who is making a number of achievements with her artistry. Her most recent accomplishment was apprenticing with internationally recognized portrait artist Odd Nerdrum in Norway and Sweden. She recently received the Stobart Foundation Grant which helps painters in the beginning stages of their careers. Ellis is currently working on a series of paintings that the grant will help fund.
Do you know a local person who is doing great things? Let us know by emailing Editor@SouthJersey.com.