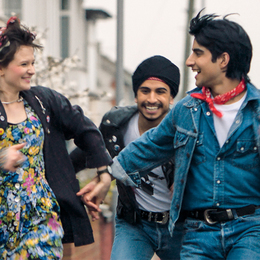 Greetings from Asbury Park
How the star of the new Bruce Springsteen-inspired film went from unknown to rubbing shoulders with the boss.


by Debra Wallace
One moment 21-year-old British actor Viveik Kalra was making a movie about a teen falling in love with life through Bruce Springsteen’s music, and the next moment he was rockin’ the red carpet in Asbury Park with “The Boss” himself.
Who says that dreams can’t come true?
In fact, wish fulfillment, inspiration and dreams coming true are the themes of New Line Cinema’s Blinded by the Light, which tells the joyful story of Javed (Kalra)—a British teen of Pakistani descent growing up in Luton, England (about 30 miles outside of London)—during the racial unrest and economic turmoil in 1987.
While writing poetry to the intolerance of his hometown and the inflexibility of his traditional father, he discovers a kindred spirit in Springsteen’s powerful music, filling him with the desire to pursue his big dreams.
Springsteen gave the director his permission to incorporate his music and lyrics to score the movie, which was inspired by Sarfraz Manzoor’s memoir and his screenplay, co-written/directed by Gurinder Chadha (Bend it Like Beckham).
In fact, “The Boss” was so smitten with the memoir and the movie that he attended the premiere on a rainy August night not far from where his own big dreams took off. We spoke to Kalra about that special evening in Asbury Park and found out the inspiration behind the film.
What was it like to walk the red carpet with the man himself?
Insane. No one told me he would be here. I literally fell to the floor. Sorry, I was not cool at all. We just made a little indie film, and now we’re here in Asbury Park where this story all began for the great man himself, so to be there with Bruce Springsteen was mind-blowing.
Was your first visit to Asbury Park what you expected?
On the car ride in, what was weird was seeing everything with “Asbury” in the name. So, like, we passed somewhere, it would be, like, “Asbury Tire Shop,” or “Asbury Café.” So, seeing everything with “Asbury” in the name, I was like, “Oh, my goodness, we are really here! We are really doing this. It’s not just a place with a name anymore.”
Blinded by the Light is an inspiring movie. What kind of reaction are you getting from the film?
Hearing that men cried is wonderfully touching and makes perfect sense because at the heart of the film is the father-son story. A lot of adult men everywhere we show the movie have been crying, which is a beautiful thing. We are living in a world where men are encouraged to take better care of themselves and are allowed to be more emotional.
How did you prepare for the role?
What was amazing is that anything I needed, Sarfraz Manzoor, the British journalist who Javed is based on, gave me total access. I could message him, text him, call him and talk to him. Before we started filming, he took me to the first town where he grew up, the second town he grew up in, and all around the spots where he used to hang out.

It all really came together when we were in costume, with our hair and make-up done. I really didn’t have to imagine I was in the ’80s. From the time between action and cut on the set, I was in the ’80s. There was no fakeness to it, because the world was created so vibrantly around me.

How daunting was this to go from drama school to being the leading man in your first film?
It was definitely a whirlwind experience. I auditioned three times and did my best version of “Born to Run” in the audition. And then I felt like I blinked and I was on a film set. It was quite an intimidating prospect, but I was focused and had my head down doing the work, so it wasn’t as daunting as it could have been.
What place does music hold in your life?
Music is extremely important to me and a lot of people. I think it’s sort of wonderful that you can listen to something and it can take you to a different place, a different time, and that it can take you within yourself, or away from yourself. I think there is beautiful power in music in transporting you. I think that’s the idea with art, in the sense that it can be so wonderful and it is different for everyone.
Did it surprise you that you can watch this in a small town in the U.K., at Sundance or in Asbury Park, and see that we’re all so much more alike than we are different?
It constantly surprises me, but I think what I’ve learned to understand about stories is that those that are most specific to a town, a place and a time are the things that can end up being the most universal. People in Asbury Park witnessed the hardships, struggles and relationships of a British-Asian family onscreen in Luton, a town which none of those people would’ve heard of.
What do you hope the audience takes away from the film?
At the heart of the film is a character who amid struggle and amid the worst of circumstances, continues to strive after being knocked down again and again and says, “You know what, you’ve oppressed me, but I’m going to rise above that.” There is something beautiful and hopeful about that. More than anything I would say that this is a feel-good and healing movie.