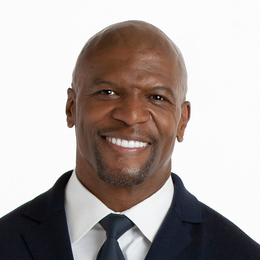 
by Debra Wallace
At 51 years old, Terry Crews is an anomaly.

He has the energy of someone 20 years his junior. His chiseled frame makes him look as though he still belongs in a National Football League uniform. His articulate speech and booming voice make him seem larger than life.

Yet Crews possesses a quiet gentility that casual observers might overlook. It comes out when he talks about his family, his philanthropic endeavors or his genuine concern for people who have the courage to show their vulnerability on a global stage. Truly a gentle giant, he’s committed to using his status to spread kindness and positivity everywhere he goes.

Actor, comedian, reality-show host, artist, activist, family man— Crews is always on the go, and his commitments sometimes overlap. Some days, for example, he’ll have to film the prime-time comedy series Brooklyn Nine-Nine in the a.m., and then host NBC’s prime-time reality series America’s Got Talent in the p.m.

“All of this is a labor of love,” he explains. “I already know I’m living a dream, so the appreciation and gratitude are there, and from that, the energy comes. … Nothing wears you out more than when you become ungrateful and you don’t want to be where you are. You have no energy, and you start to feel kind of low. So I’m just going to keep doing what I love, and it feels so amazing that I could literally go on forever.”

He’s so engrossed in each project he undertakes that his wife, the singer-songwriter Rebecca King-Crews, sometimes has to pry him away from his work. That’s because he feels a deep passion for every project of which he is a part.

“This mentality has fueled me and kept me going during my entire life,” he says. “It’s been an amazing ride. Sure, there have been heartaches, setbacks and craziness, but overall it’s been a joy. It has all been worth it.”

‘Change the World’
Crews’ attitude stems largely from his childhood experiences in Flint, Mich., which he describes as “a town where you were supposed to hate where you worked.” To him, growing up in Flint was a series of small sacrifices where residents felt as though “you’ve got to push a rock up the hill for the rest of your life.”

“I figured you had to enjoy [childhood] because the fun will be all over all too soon,” he says. “I saw so many people who gave up their dreams for security, and in the end, there really wasn’t any security; it was a myth because they ended up losing what they wanted anyway. So, I told myself, ‘You know what? Since I am going to bust my butt working hard regardless of what I do, I might as well do what I love.’”

Not every day has been a birthday party, of course. Crews grabbed headlines in October 2017, when he announced on Twitter that a high-up executive had groped him at a Hollywood event. As a result of his speaking out, he was included in the group of individuals named TIME magazine’s 2017 Person of the Year—“the ‘Silence Breakers,’ the voices who launched a movement” against sexual harassment and sexual abuse.

“When I received the call, my first thought was: Wait a minute, I don’t deserve to be up there with these other important #MeToo stories,” Crews recalls. “But they told me that this has always been a 2D issue, a woman’s issue, and by including me it changed the whole issue into a 3D movement.”

He appreciates the opportunity to have helped to make a difference.

“Sometimes, all it takes when it comes to people who change the world or do big things, is starting with smaller things; it’s not giant moments,” he explains. “So, I had to speak up, and this shows that just by speaking up you can literally change the world.”

The willingness to be a positive force applies to his work, too. When viewers watch America’s Got Talent, with Crews as the host, alongside judges Simon Cowell, Julianne Hough, Howie Mandel and Gabrielle Union, he is frequently seen comforting the often-terrified contestants. Playing such a fatherly role comes naturally.

“I know what they are experiencing,” he says, “because I remember when I was literally looking out my window wishing and praying that I could make a difference and that I could do something that people could enjoy. I also remember wanting a trophy so badly.”

He recalls being at the home of a childhood friend who excelled in karate. The boy had an area of his house designated for his trophies.

“I thought: I can’t wait until I can do something good enough to get a trophy for it, and when I got a little bitty achievement trophy, I treasured it,” he says. “So when I see these folks taking their place at the world’s biggest talent show, and getting over their fears of performing and public speaking, I am here to tell them that it may feel like the valley of the shadow of death, but it’s not real. … I tell them, ‘Go out there and do what you were born to do, do what you have always dreamed about.’”
‘Philadelphia Gave Me a Big Hug’
The city of Philadelphia figured prominently in Crews’ rise to fame. He began his high-profile career not in the bright lights of the stage but on the football field.

After the Los Angeles Rams drafted him in the 11th round of the 1991 draft, he played in the NFL from 1991 to 1997. He took the field for the San Diego Chargers, the Washington Redskinsand, briefly, the Eagles. He recallsspending Christmas at the Holiday Inn across from Veterans Stadium after being “picked up by the Eagles for that’97 season.”

“I was able to pay for my kids’ Christmas that year, so it will always remain a great memory,” he says. “When I wascut [by the Redskins], I thought I would never ever play football again. So, the fact that the Eagles called me and wanted me, a city wanted me to be on their team, and it was the playoffs, it was a really special time for me. I was wondering if I was good enough and what happened meant that I could feed my family, and it was like the city gave me a big hug when I needed it.”

One of Crews’ favorite things about Philadelphia is “the attitude of the people,” he says. “It always feels like home when I come back. It’s a whole different feeling from New York or anywhere else. It has its own unique vibe and Philadelphia doesn’t have a twin. When they say brotherly love, that’s the truth. It felt like a brother back then, and it still feels like that today.”

Once he retired from professional sports, he found he still wanted to work in entertainment, specifically as an actor—and the opportunities came quickly enough. His filmography has since grown to include roles in shows such as Everybody Hates Chris, Arrested Development and The Newsroom, and movies such as Idiocracy, Bridesmaids and The Expendables, as well as some memorably off-the-wall commercials for a certain men’s deodorant.

One of his favorite roles: Dwayne Elizondo Mountain Dew Herbert Camacho, a career entertainer who becomes president of the United States in the post-intelligence age, from the 2006 dystopian film Idiocracy.

“I felt it was a watershed moment,” he says. “At the time [the movie] just failed, but now lo and behold, 15 years later it’s a classic. There are things you think people are not watching, and then years later it’s their favorite [movie]. That’s why you have to do a great job every time, and you have to love what you do all the time, because you never know when it’s going to impact people.”

These days, working on two television shows simultaneously may seem like a daunting task, but Crews likes having a full schedule. Besides, one of the things he likes most about Brooklyn Nine-Nine, which recently moved from Fox to NBC, is that he gets to be himself. The character he plays, named Terry, was created specifically for him, and he says it’s fun to see how others view him.

“The writers saw me eating yogurtrecently, and they incorporated it into the show,” he adds. “They discovered I tote my family around in a minivan, so they added the fact that [my character] has a minivan in the show.”

Among all the roles he’s played throughout his career, he considers “Family Man” to be the most fulfilling. He’s the proud father of four daughters (Naomi, Azriel, Tera and Wynfrey) and a son (Isaiah), and his family has grown to include a 9-year-old granddaughter.

“As a grandparent, you realize that these kids have to find their own way, and sometimes they have to fall down,” he says. “You realize that it’s not that big a deal. They’re going to be OK, and you can take a sigh of relief.”

‘I’m a Terry Bear’
Crews may be best known for his work on the stage or speaking out for those who don’t have a voice, but his gifts aren’t limited to acting and advocacy; he’s also a skilled illustrator.

In fact, Crews took the time to illustrate Come Find Me, a children’s book written by his friend and former Redskins teammate Ken Harvey. The author noticed a dearth of books with characters that looked like Harvey’s sons, Marcus and Anthony. Considering Crews’ previous experience as a sketch artist—he illustrated the coverof the 2017 Ad Age “Creativity 50” issue—Harvey asked his friend if he would illustrate the book. First published more than 20 years ago, Come Find Me has since been re-released as an augmented-reality book that can be downloaded through platforms such as Google Play.

“The inspiration for the story, those two little boys are grown men right now,” he says, “and I think this book helped them see themselves in a more positive light.”

His imposing size and stature aside, Crews is often described as a gentle soul, and as someone who doesn’t take himself too seriously. He tends to agree with both descriptions.

“I’m a Terry bear,” he says. “I would much rather use my muscles for hugs and body building than for slamming people to the ground. … For me, I wanted to get big so I could create, build and help others. And that’s always been my mentality. It feels good because I am wired for this. My wife calls me ‘Mr. Positivity,’ but I can’t help it. Being a soft soul is a huge compliment.”