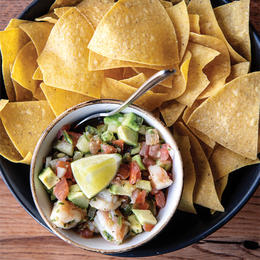 
by Erica Young; Photography By Jeff Anderson
South Jersey bar hoppers were shocked when popular craft beer bar The Irish Mile shuttered its doors at the end of July 2017, announcing it had sold the space to the P.J.W. restaurant group. P.J.W. already had an expansive presence on Haddon Avenue, with three restaurants—P.J. Whelihan’s, Treno Pizza Bar and The Pour House—all within a half mile of each other. But diners and drinkers alike were further surprised when the restaurant group, best known for American-inspired pub grub, headed south of the border with its newest concept, Central Taco and Tequila.

Thanks to a distinctive makeover, Central’s industrial-inspired Tex-Mex dining room is a complete departure from that of its predecessor. The finished results feature exposed brick and wood beams everywhere, with colorful murals splashed onto concrete blocks. Tables extend into the front porch and a back patio that still manage to stay relatively serene despite the Patco trains periodically passing by.

The bar sits right in the center of the dining room, a display piece that highlights its impressive and original cocktail list. The star is, of course, the tequila. You can pick from dozens of different tequilas and smoky mezcals, or try a few options with featured tequila flights.

Margaritas include seasonal options, like the watermelon mint, which uses white tequila, fresh watermelon-mint syrup, fresh lime, Cointreau and agave nectar alongside fresh chopped mint. It was a crisp and perfectly summery sip.

The regular options are also standout, including the coconut margarita, which has quickly become my favorite cocktail in South Jersey. White tequila is mixed with coconut cream and milk, then finished with lime juice and Cointreau and served in a glass rimmed with citrus sugar, all topped with toasted coconut.

The one drink that you won’t find on the menu is a traditional lime-tequila-Cointreau margarita, the closest option being the Mezcal, which replaces standard tequila with a super-smoky Wahaka Espadin Mezcal, a more acquired taste that might shock casual tequila sippers.

Small plates and fast service are the name of the game at Central, with food arriving to the table as soon as they are finished in the kitchen. A great kickoff to the meal are the nachos, which come smothered in queso oaxaca, Monterey jack and cotija cheeses, pickled red onions, fresh pico de gallo, stewed black beans, crema and your choice to add chicken tinga or chorizo. We went with the chorizo variety, which was crispy and crumbled. The nachos had a ton of flavor with plenty of toppings, and the chips still remained crunchy with every bite.

I was drawn to a starter of Mexican street corn, which I’ve only ever had served on the cob. Central’s variety came in a bowl, which made for much easier and cleaner eating. The corn was sautéed with jalapeño and the Mexican herb epazote and then smothered in a mix of mayonnaise, crumbled cotija and chili seasoning. It was the perfect amount of cheese and creaminess on top, forming a velvety-crispy bite that was absolutely addicting.

Another starter, the shrimp coctel, had me pining for my last trip to Mexico and the taste of fresh seafood and chunks of avocado swimming in a rich and creamy tomato and lime base. Central’s offering was a bit more Tex than Mex, with chopped shrimp resting in a broth-like pico de gallo style salad, finished with cucumber and sliced avocado. A bit more citrus would have really given this dish the vibrancy it deserves.

The burrito selections are served with chicken asada, grilled shrimp or carne asada, each stuffed with Mexican rice, pinto beans, pico, Monterey jack cheese, guacamole and crema. You can also get it served mojada, or smothered in tomatillo and tomato sauce. We opted for the carne asada option, and found it to be missing major seasoning, especially in the rice, which was mushy and flavorless.

The burrito fell by the wayside, especially as tacos began to arrive. Tacos, like the margaritas, have seasonal specialties and standard regulars, all served in a soft tortilla shell with the exception of the hard-shelled picadillo. The tacos started strong with a coconut shrimp option: juicy shrimp coated in sweetened coconut are fried until golden and served with sautéed pineapple and a rich avocado crema that cut the sweetness. The shrimp and chorizo taco featured sautéed shrimp with crumbled chorizo, burst cherry tomatoes and pureed salsa verde.

Carnitas was a play on tradition, with braised, shredded pork alongside fresh onion, chopped cilantro and salsa roja. Meanwhile the spicy, crispy chicken taco was one of the several menu options that turned tradition upside-down, and did not disappoint on the promise of spice. It featured strips of buttermilk fried chicken doused in chipotle crema, with shredded cabbage, pickled onion and a sprinkling of queso fresco.

The night ended with fried churros, which are available in seasonal flavors as well as traditional cinnamon sugar. The churros were absolutely perfect for sharing, golden and crispy on the outside but delicate on the inside, made even better by a rich, mild chocolate dipping sauce.

While some of the plates could use some fine tuning, Central has established itself as an easy-going spot to grab some stellar cocktails and satisfying small bites on a casual evening. The atmosphere and stellar service set the mood for a fun night and it’s easy to envision the restaurant flourishing amidst the South Jersey dining landscape. Just be sure and grab one of those coconut margaritas for me.