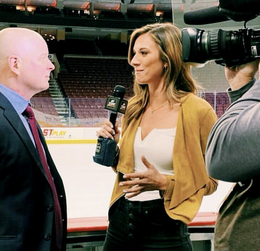 Welcome Back
For Taryn Hatcher, the chance to leave Delran and pursue a career as a sports reporter in Hawaii was a dream come true. But, the opportunity to come back home and cover the teams she grew up cheering was even better.


by Peter Proko
Taryn Hatcher spent just over three years living and working in beautiful Honolulu, something that many would consider the opportunity of a lifetime. And while she was very content living on the island, trying to learn how to surf and becoming enthralled by the culture, the Delran native didn’t flinch when she got a new opportunity that was equally too good to pass up: the chance to come back home and cover the sports teams she grew up rooting for her whole life.
These days, the Rutgers University product can be seen on NBC Sports Philadelphia, most frequently as the rinkside reporter as part of the broadcast team covering the Philadelphia Flyers. It was a homecoming in more ways than one as Hatcher was once an intern at the network and now works alongside many of the on-air personalities who helped groom and mentor her.
“To not just be back in Philly, but to be back with those people was so fun to me. I met them when I was 20. They would watch my reels, give me tips and now they are my colleagues. It’s surreal,” she says.
We spoke to Hatcher to find out how she wound up in Hawaii, what she missed most about South Jersey and why having her own athletic career cut short due to injury was the best thing to ever happen to her.
How did you end up going from the Garden State to beautiful Hawaii?
Honestly it was random. I was at Rutgers and writing my senior thesis paper and my dad called me and said, “When you come home, you have to get a full-time job.” I was working sidelines for the Big Ten Network part time. So I was looking online and I applied to one job in Green Bay, Wisconsin, one in Missouri and one in Hawaii. Honolulu called me first and asked me if I could fly out two weeks later and audition. I couldn’t because I still had finals. I flew out as soon as I could and moved out three weeks later. It was very quick, but I got the biggest market and the best climate [of the three].
What made you decide to look out of the area for work?
I knew I had to leave to get my foot in the door. Philly is a huge market and I needed to go get reps somewhere else. I really wanted to do the one-man-band situation [where I do work behind and in front of the camera]. Everyone I talked to in the business that has done it had such an understanding of producing and editing and it helped me get a better idea of how things are going to look when you are doing them. The fact that I don’t have to shoot and edit my own stuff anymore baffles me.
What did you like most about living there and was it hard to say goodbye?
It was so hard to say goodbye. Its cliché, but my favorite thing ended up being the people I met. I never met anyone from Hawaii, I had never been there. Everyone I became close to became my family; I spent holidays with them. The whole lifestyle, the people are so tied together out there and the weather is always beautiful. The food is amazing.

When the opportunity arose to come back home, how excited were you to be able to work in this market?
I was crazy excited. I had been an intern at NBC Sports Philadelphia when it was Comcast SportsNet in 2013. All of those people were really good to me. Marshall Harris was the one who suggested me for [the job]. He put me in touch with so many people. Derrick Gunn was a huge mentor as was Amy Fadool.
What was one thing besides family that you missed the most about South Jersey?
I missed pro sports a lot. Friends were a big thing. I missed the changing of the seasons. I love the beach and the weather in Hawaii, but something about fall with baseball season wrapping up, the Eagles in full swing and the Flyers and Sixers are starting up, that’s how I remember growing up.
I also missed soft pretzels, I love them.
What were some of your favorite haunts when you were growing up here?
Like most people, we would go to the beach every year. I had a lot of friends in the Somers Point area. When I moved back in the summer, I had to hit Manco and Manco right away. And when I got back, Wawa was the first place I wanted to go.
[My friends and I] were big mall kids for sure. Back when Moorestown Mall had the fountain, in my middle school days. We’d hang out by the food court and not shop because we had no money. Also the Holiday roller rink in Delanco was another big one.
You do a lot of different things for NBC Sports Philadelphia, but right now you are mainly concentrated on the Flyers. Despite the down season, how have you enjoyed the experience?
It’s awesome. Working with the Flyers, that was kind of a surprise, an opportunity that came up after I had already gotten back. My dream had always been [to be a] beat reporter with a team because you really get to know the people you talk about. To get to travel with them and see all these new places has been a great experience. The first time I left the country was when we played Toronto a couple months ago. There’s so many things I never anticipated with this job.
What is your background with sports, were you an athlete yourself?
I played basketball and swam a lot until I got to my freshman and sophomore year in high school and started to get interest from colleges about soccer. But then I blew my knee out and didn’t play, which was a blessing in disguise.
People always ask athletes how they get prepared for a game, but how do you get ready to do your job—any routines or rituals you have to get out of the way?
I used to be really superstitious actually. I would wear certain pieces of jewelry every game, I felt I did better when I wore them. But one of my bosses one day in Hawaii said you have to let all that go, it’s going to drive you insane. When I was in Hawaii, my tape for the first three months, I wore the same earrings, the same rings, my hair parted the same way.
I wasn’t a superstitious athlete, so I don’t know where that came from, but I started young in the business, so maybe it was a security blanket. I don’t do that anymore; I just try to over prepare and get loose and talk to people.
Who were some of the people who inspired you to enter into the field?
The first time I thought about [this type of career], I was really young and watching Dick Vitale doing an ACC basketball game; he was so amped. I thought this is cool, he’s really into it.
Erin Andrews built her own empire out of what she’s been able to do with her sideline position, so I’d be lying if I didn’t say her. I always had a lot of admiration for how she took that role and broke it open.
Amy Fadool is another one. We are co-workers and I don’t want her to think I’m nuts, but when I was an intern there she was so good to me. And when you see her talk in the newsroom, she is as knowledgeable as anyone in the room.
Do you like to watch yourself on TV or are you one of those people who would prefer not to see yourself on camera?
I hate watching myself, but I do. You have to watch, it’s like [an athlete watching] film. You watch and you kind of realize it’s never as big or as low as you think it is, you just have to keep it together. I try to more so watch the moments I did something I liked and how I can do more of that as well as the moments I hated to see what I could do better.
It’s that time of year when people are making and breaking New Year’s resolutions, did you make any for 2019?
Not really. I think every year my resolution is to try and be a kind and positive person and have an impact on everyone’s life. My resolution last year was to get in the ocean four days a week, but I couldn’t really make that resolution this year.
Maybe to eat more soft pretzels is a good one?
My roommates used to call me Carbie Barbie. I am a garbage disposal, I eat everything.
To read the digital edition of South Jersey Magazine, click here.