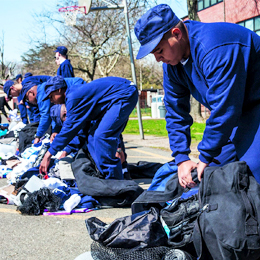 Challenge Accepted
Students struggling at traditional high schools can get their lives back on track at the New Jersey Youth Challenge Academy.

If Maxwell Arnal had his choice, most of his days would be spent in a garage.

A 17-year-old from Cherry Hill with a passion for working on cars, Arnal is one of those kids who has a hard time sitting still inside a classroom. That’s why his junior year at Cherry Hill West did not include pop quizzes, SAT preparation or any serious thought about academics.

In fact, he hardly even showed up at all.

“I went for one or two days just to keep my name in the books, but I really wasn’t going to school,” he admits. “I was working with my friends on other people’s bikes, I was working on cars. Generally just doing handyman-type stuff.

“Technically I finished my sophomore year, but I didn’t get full credits for any year of high school. I wasn’t attending school [regularly] because I wanted to move on with life and start working. But I decided I really need my high school diploma, so I came here.”

“Here” is the New Jersey Youth Challenge Academy, and it has been giving students like Arnal a second chance at a quality education since being established in 1993. Sponsored by the National Guard and the state of New Jersey, the program is tuition-free and open to students between 16 and 18 who have dropped out voluntarily or failed out of high school.

“The candidates are students who have found that traditional schools are just not working out and need an alternative to get a second chance at their diploma,” says Stephanie Dearden, the assistant coordinator for recruitment, placement and mentoring at the academy.

“We see these kids make 180s. They come in as one person and they are unrecognizable when they walk across the graduation stage.”

Count Arnal among that group. Although he had misgivings upon entering the academy in April, he is proud of himself for sticking it out and is on track to graduate in September.

“About a month and a half in I was trying to leave, but thankfully I rethought my decision and stayed in,” he says. “At first [my parents] had doubts I would finish because they thought I was a quitter. That was another reason I decided to come here, to prove that I’m not going to give up easily on anything.”

Located at Joint Base McGuire-Dix-Lakehurst, the academy stresses academic improvement with a focus on math, science, social studies and language arts. Cadets who make it through the program earn the opportunity to take the GED exam and receive a New Jersey state high school diploma if they pass.

But schoolwork is just one of the eight core components, which also include life coping skills, job skills, health/hygiene, responsible citizenship, service to the community, leadership/fellowship and physical fitness.

“A lot of our kids come here and they don’t know how to do their own laundry, so that’s something we have to teach them,” Dearden says. “A lot of them have never had a job or looked for a job and they don’t even know what a résumé is. We try to teach them the skills that can be transferrable once they go home.”

The academy is a significant adjustment for almost everyone who joins. Since it is based on military principles, discipline and structure play an important role, and the first two weeks of the program are referred to as the acclimation phase so students can adapt to their new circumstances. Their only communication with friends and family at this stage is through written letters.

Dearden calls the acclimation phase “the hardest part of our program” and “a culture shock” for the students. Some drop out during this period, either by their own choice or because they are causing problems and are asked to leave.

“It was really hard,” Naj’awa Robbins of Salem, a current student, says about the acclimation phase. “You have to get used to things, like needing permission to speak and other stuff that you normally do at home. [I missed home] a lot and I thought about quitting all the time. But I couldn’t let my mom down. I had been giving her such a hard time with school and I just wanted to finish this.”

Students like Robbins who persevere through the acclimation phase become cadets and move on to the residential phase, which lasts for 5 ½ months. Their days— which start at 5 a.m. and end at 9 p.m.— are filled with chores, classes, marching formations and physical training.

They sleep in barracks with about 20 people per room, with females and males on separate floors. The residence also has two computer labs, a library and spaces where students can relax, do homework or watch movies.

During the residential phase, students are permitted one five-minute phone call per week to catch up with their parents or other family members. Their only in-person visits are from their designated mentors; a responsible adult they choose who lives outside of their household.

“It’s definitely hard having some distance from your parents, but the letters that we get to send help a lot,” says Garrett Pendleton, 16. “I think [my parents] are building more trust and believing I can do things on my own since I’ve joined the program.”

Pendleton’s father is in the military so he moved often while growing up and attended several schools. He has found stability at the academy and built friendships with his fellow cadets.

“There’s a lot of similarities between us,” he says. “Everybody is here to get a diploma or get their parents’ trust back. This was the last choice for a lot of the people here.

“If I get my diploma—which I’m hoping I will—I’d like to go to community college and get some credits. I’d like to go into either nursing or the Coast Guard; I’m looking at a lot of options right now. The program has definitely helped with that, because before I wasn’t really thinking about [the future]. I was just kind of moving through life, but now that I have a future set up, things are definitely going a lot better.”

Pendleton and the other cadets who complete the residential phase move on to the post-residential phase, in which they meet regularly with their mentors and academy leaders to follow through on their goals. Some decide to continue with their education and enroll in college, others enter the working world and a large number join the military after getting a taste of the commitment.

“I remember working with one student a couple of classes ago; he came in and gave everybody an attitude,” Dearden says. “He refused to engage in the process, didn’t want to pay attention in class. Somewhere along the line we reached him and he made a complete 180. He got to the point where he was helping other students who were struggling in their classes, who didn’t know what they wanted to do. He actually just enlisted in the Army. That’s a great feeling for us. That’s why we love the post-residential phase, because we get to see what these students go on and do.”

Robbins is also considering joining the Army when she graduates. No matter what she decides, the girl who dropped out of high school because she didn’t like being around other people has made a dramatic change.

“I’m more disciplined and I have a lot more respect for people,” she says. “I know how to talk to people in a better way than I used to.”

The academy is currently accepting applications for its next class, which starts on Oct. 9. Arnal encourages anyone who may be struggling to look into the program, because it helped him get back on track.

“When I complete this program I plan on getting my ASE master mechanic certification from one of the trade schools in the area,” he says. “Then I want to get a job in an auto shop, eventually open my own shop and just work on cars—it’s what I love to do. I would say I have a lot more determination now to do that. This program really helps as far as that goes.”