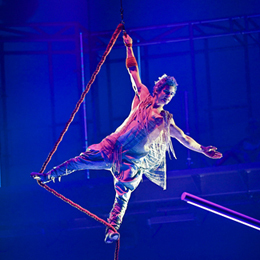 When Canada-based theatrical troupe Cirque du Soleil brings its latest production, Volta, to the Philadelphia region for a six-week run beginning in mid-July, there will be one South Jersey resident certain to get closer to the action than any other.

That would be Wenonah native Nick Pituk—Volta’s head therapist, a masters’ level certified athletic trainer (ATC), who works and travels with the 48-member cast throughout the touring show’s multi-city run.

“I feel very privileged to do what I do,” the 44-year-old says. “It’s been an amazing career.”

Performed under a big top, Volta, which debuted in the spring of 2017, is one of more than 20 Cirque du Soleil productions taking place around the world at any given time. This newest show is themed around extreme sports: It tells the story of a popular game show host who has been blinded by fortune and fame, but starts a personal quest to find again his true self after a group of free spirits encourage him. Like other Cirque du Soleil productions, it has earned raves as a visual feast of athleticism, acrobatics and dance.

For Pituk, making sure each cast member is in the best physical shape possible to perform night after night—along with working with anyone who gets injured— is deeply rewarding. And according to the show’s assistant artistic director, Johnny Kim, Pituk’s work as an athletic trainer is extraordinary to behold.

“What’s great about Nick is that he comes with a vast amount of knowledge, having come from the sports world,” Kim says. “He is so well-tuned into the needs of the artists. … He has a fine eye and a sensibility and is able to take them under his wing and take care of the athlete, the artist and the person.”

Pituk is especially keyed in to each performance’s training and background— be it in dance, gymnastics or trapeze. “Nick not only uses his knowledge of the human body, he understands the small intricacies of each person’s background and how that impacts their particular work,” Kim says.

From backstage supervision to one-on-one training and group classes, Pituk is a key member of the touring company, Kim says. “He has an important role.”

The only child of Wenonah residents Tom and Audrey Pituk, Nick was a huge sports fan growing up. He also played sports, but not the one sport that later became a big part of his life: football.

By the time he graduated from Gateway Regional High School in 1992, Pituk was ready to begin training for a career in sports therapy.

“When I was a senior, there was a Temple University student doing her clinical hours in athletic training at our school,” Pituk recalls. “That was my first real contact with someone in that field. I thought it would be a good fit for me.”

Pituk was accepted into Temple’s athletic trainer program and immediately knew he’d made the right choice: “I loved the way that you could make a real difference by being there when things happen and by helping athletes also work on body mechanics to avoid injuries. It seemed to me that athletic trainers really had the cool jobs.”

With a dream to become a trainer with an NFL team, Pituk ended up working as an intern for the Atlanta Braves instructional league while still at Temple, then landed a job after graduation with

While working on his master’s degree in athletic training at the University of South Carolina, Pituk became a graduate assistant for the college’s football team. In 2005, he was hired as head athletic trainer for the Georgia Force, an Arena Football League team that had just had been purchased by the NFL’s Atlanta Falcons. After two and a half years in that role, Pituk was bumped up to an assistant trainer’s role with the Falcons, while remaining the Georgia Force’s head athletic trainer.

“Between working with the two teams, I was very busy and I learned a lot,” he recalls, adding that the Falcons organization was “very good to me.” Pituk was with the Falcons abouta year and a half when a friend from graduate school tipped him off to a job opening in Las Vegas with the production show Le Rêve (“The Dream”) at the Wynn casino resort. The show, set in an aquatic theater-in-the-round, gave Pituk his first taste of working with a different kind of athlete: the stage performer.

“It was very different than working with a sports team, but I liked it immediately,” he recalls. “It was exciting to be part of the creative process and to help the performers on so many levels.” In 2010, Pituk joined Cirque du Soleil; Volta is his third show with the troupe—he also served as head therapist with Mystere and O.

“This is soup-to-nuts health care; we have to be accessible and ready for any injury or emergency,” Pituk says. “Whether it be an overuse injury or something that occurs during a show, we work very closely with the performers.”

That can mean everything from creating and implementing a treatment plan on the road, to setting up physical therapy or even sending an injured performer home to rehab, if need be.

“The kinds of things we see are definitely on par to what I was used to working in sports,” Pituk says. “We’re talking 300, 400 shows a year.… With the repetitive nature of any activity, you’re always going to be treating a percentage of people for something.

“I’m at my best when people have their worst injuries,” he says without irony. “That’s why we’re here.”

While Pituk says he’d love to ultimately find his way back to the South Jersey region for good—are you listening, Eagles?—he gets to visit often. “Being with a touring show, you get more time off on the road. It takes time to set up everything, and that’s when I’m able to get a break and come home for a visit.” While he owns a home in Las Vegas, Pituk doesn’t think he’s ever stayed away from South Jersey for more than six months since launching his professional career.

“I fell in love with Las Vegas in a way I couldn’t believe. Vegas is my home, but so is South Jersey,” Pituk says. For now, he’s content to be part of the magic known as Cirque du Soleil. “In my role, I get to pull back the curtain to see The Wizard of Oz, so to speak,” he says. “It’s exciting to be part of something this creative andfascinating.”

Cirque du Soleil’s Volta will be under the Big Top at the Greater Philadelphia Expo Center in Oaks, Pa. from July 12 through Aug. 5. Visit PhillyExpoCenter.com for more information.