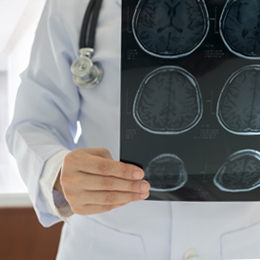 Medical professionals are studying neurological disorders constantly to develop the latest technologies and advancements for optimal cures and medical treatments. Whether they’re reinventing a current procedure or creating from scratch, doctors want to move forward to give the best possible care to their patients.

Common acute symptoms are strokes, brain tumors and seizures that need to be tended to promptly. Alzheimer’s, Parkinson’s and dementia diseases have chronic neurological symptoms which develop over time. Identifying and caring for symptoms of any disease is the first step in understanding what treatments work best.

Although there is a lot of mystery behind cures for a disease or why a disease surfaces in the first place, neurologists are striving to fill in the gaps and are excited about South Jersey’s future in neurological breakthroughs.

Relieving Migraines
Throbbing headaches accompanied by nausea otherwise known as migraines often affect women more than men in a 3-to-1 ratio, says Dr. Russell Abrams, neurologist at Relievus. There is no known reason why migraines occur, but risks include genetic, hormonal and environmental factors. Migraines are the most commonly seen neurological disorder withplenty of preventative and treatable options.

“There are a number of excellent medications used to prevent headaches as well as many medicines that can abort headaches,” Abrams explains.

Migraine headaches become a serious concern when new onset headaches arise in those over 50, those with weakness on one side of the body or those unable to speak and swallow. Doctors concerned with patients experiencing these symptoms and more serious issues will typically recommend an MRI or CAT scan. Abrams stresses patients should consult a physician or neurologist if they’re concerned.

However, most migraines are treatable with the help of medications. Abrams combines abortive medicines and preventative medicines and mentions sphenopalatine blocks, occipital nerve blocks and Botox as alternative methods of treatment. And a new treatment comes by way of Aimovig, a receptor block injection that reduces the severity and frequency of migraines per month for a patient.

“There is no reason for patients to suffer from migraines, as there are beneficial and effective therapies,” Abrams says.

Battling Multiple Sclerosis Multiple
Sclerosis (MS) is a neurological disorder where the immune system attacks the central nervous system. A few genes are directly associated with MS and abnormal genes can be activated for unknown reasons, causing the disease to appear. There is a lot of mystery behind what specifically activates the genes, but Dr. Steven Bromley, neurologist and MS specialist at South Jersey MS Center, says studies attribute viral infections, such as Epstein-Barr or mononucleosis, mutated cells and environmental factors to helping trigger the disease.

Symptomatic therapies focus on easing the pain, dealing with bladder issues and alleviating motor problems. Although there are no known cures for MS, Bromley is using the latest methods to combat the disease. Rather than heal the symptoms with conventional symptomatic treatment, he is concentrated on biologic therapies.

“We can make antibodies that actually target one specific type of biologic process and change it,” Bromley says. “We have biologic therapies or antibodies that target some aspect of the immune system’s functions, and when it’s abnormal, we try to make it more normal.”

By creating an antibody to patch white blood cells, the antibody could eliminate cells from entering the brain. Other antibodies target a specific cell type in the immune system that causes the problem and removes the bad cells from the body.

Stem cells are becoming increasingly popular and can be used to create a better immune system. Bromley uses a biologic therapy that targets the active immunity and takes it completely out of the system. “It allows your body only stem cells to recreate the whole new immune system, hopefully without the memory of MS,” Bromley says.

Restoring Health
When looking for a rehabilitation facility, it is important patients find not only a recovery center that specializes in neurology, but a facility where therapists work in unison toward the same goal, says Dr. Karen Lindgren, neuropsychologist and senior clinical director of the Bancroft NeuroRehab department.

Eventually, Lindgren wants to use virtual reality with patients who are recovering. Patients would be assessed through simulations such as driving a car, walking on a rocky landscape or cooking in a kitchen. The patient can participate in these different movement exercises in the comfort of a neurorehab facility without causing harm in the process.

So as neurological rehabilitation continues to evolve and new technologies offer evolving methods of treatment, Lindgren urges specialists to conduct their own studies to form an evidence-based conclusion on the effectiveness of the treatment.

“The technologies that are coming out are amazing and there’s almost no end, I think, to what we feel like we can do for people from a technological end in neurorehabilitation,” Lindgren says.