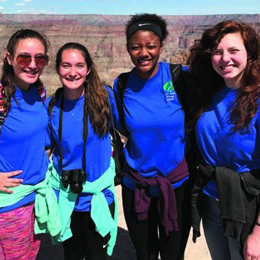 The Kids are Alright
Local youth volunteers show that the next generation knows a thing or two about helping those who need it most.

There are millions of volunteers across the nation hoping to make an impact on someone’s life, an impact on the environment or to improve their understanding of the world. Teenagers and adolescents are getting involved at a larger rate in the U.S., and through volunteering they are learning respect and leadership skills that will lead them into adulthood.

Children in South Jersey are no exception, molding into role models for the following generations. They exceed expectations of time and effort, keen on helping those in need. Not only do they devote their time to volunteering, but in an eagerness to lend a hand, some children have created their own nonprofit organizations. These local youth volunteers love what they do and want to spread their efforts with others in the community.

Stephanie Masapollo
Washington Township
About seven years ago, Masapollo was a fourth grader devastated by Gov. Chris Christie’s decision to postpone Halloween. Her feelings coincided with children who might never get the chance to celebrate the candy-infused holiday. Her idea, Costumes for Kids, came to fruition. The annual charity receives lightly used costumes, organizes them and sends them to drop-off locations for distribution. Costumes for Kids has donated about 1,800 costumes so far and for Masapollo, helping the kids get their perfect costume is what she cherishes most.

Lauren Brown, Maverick Brown and Leeanna Brown
Mickleton
Every Sunday morning for the past two years, the Brown children have taken a trip to Philadelphia and given the homeless donations received at The Unforgotten Haven, a nonprofit organization. The children hand out several items ranging from doughnuts and coffee to bags filled with clothes. Additionally, they help hundreds of rescued animals transported from Southern kill shelters. The children will soon be going to Georgia for the first time to assist the nonprofit Animal Aid U.S.A. in saving dogs and other animals from kill shelters.

Jordan Slippi-Mensah
Washington Township
Slippi-Mensah was in the car with his mom, Trinna Wooster, trying to think of a way to fundraise for toys during the holidays. Sitting in a Dunkin’ Donuts, the idea was right in the palm of their hands— a hot cocoa stand. Through spreading the word on social media, Slippi-Mensah was able to raise $1,005 for 130 toys and items for children in need. He has also raised $250 for Jump Rope For Heart at his school and plans on setting up the hot cocoa stand this holiday season with the hopes of donating more gifts than last time.

DJ Alexis
Sicklerville
Alexis first began his month-long toy drive six years ago in remembrance of his late younger brother, Emanuel, whose birthday was in December. Alexis raised and distributed 621 wrapped toys to children at Jefferson Washington Township Hospital (previously Kennedy Health), the annual location of his toy drive. He wants to continue giving toys and spreading joy to children with illnesses from the help of his family and friends.

Laura Duffy
Marlton
As an avid reader and lover of books, Duffy was crushed to find out that non-English speaking members of the community didn’t have the same uplifting bookreading experience as her. Duffy was able to get a few Hispanic residents involved with choosing books that ultimately became available at the Burlington County Library system. Fundraising through a car wash and bake sale with the help of a $1,000 GeorgeW. Rentschler Foundation grant, Duffy bought 129 books for the library. Volunteering gives her a sense of pride and fulfillment, and she looks forward to doing more for her community.

Anna Buss, Grace Buss and Abigail Buss
Moorestown
Grace asked a question that sparked one conversation into a nonprofit youth organization called Live Civilly after helping the homeless at St. Matthew Lutheran Church. The three sisters are the founders of the nonprofit which has several programs including a food pantry and community gardens. Since its beginnings in 2011, the nonprofit has served over 135,000 meals. As Grace and Abigail start gaining more responsibility with the gardens, recent high school graduate Anna will be continuing her volunteer work with Urban Promise.