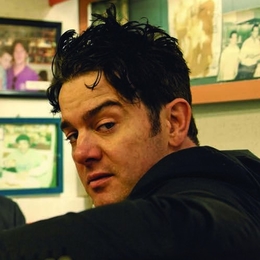 Love Never Fails
G. Love reflects on 25 years of growing up in the music industry.

Twenty-five years may be a long time to spend in one job, but it doesn’t seem that way to Garrett Dutton, better known as G. Love. As of this year, Dutton has been sharing his brand of “urban poetry” as the lead singer and guitarist  for the Philadelphia-born hip-hop/blues/indie-rock band, G. Love & Special Sauce, for a quarter of a century. He says that, much like a fine wine, he and his bandmates have only gotten better with age.

“We’re consistently on the road, but this one is special,” he says of the 25-year anniversary tour with his longtime bandmates, drummer Jeffrey Clemens and bass player Jim Prescott. “It’s a real feather in our cap to have kept the band going all this time and to have had success both creatively and on the business side.”

While Dutton grew up in Philly, he spent many memorable summers down the Shore at his family’s home in Avalon. The summer after he graduated high school, while suffering from a broken leg, he started to get heavily into  music and could be found around the clock on the porch penning songs. He recalls his neighbors often heading out to The Princeton for the night and coming back at 2 a.m. only to find him still on the porch strumming away on his guitar. Once his career took off, he started headlining sold-out shows up and down the coast. Over the years he’s played everywhere from the sainted Jack’s Place in Avalon and Laguna Grill & Rum Bar in Brigantine to the Music Pier in Ocean City and The Music Box at the Borgata in Atlantic City.

We caught up with Dutton while he was on the road to talk about the passing of time, his early days in Philadelphia—“the place where all my music comes from,” as he calls it—and the  love he feels for his favorite summertime haunts in our backyard.

Considering how long you’ve spent working as a touring musician, I imagine your crowds must include people of all ages. Aside from age—yours and your fans’—what has changed in the past 25 years?

Everything has changed. Along the way I’ve had a family; I’ve got a wife and two kids and a dog. As time passes, I think you stay the same person, meaning the essence of who you are is always the same, but you add to it, build on it. Getting older doesn’t mean you can’t improve your skill set.

whole time—Jim, Jeff and I—so we’re still just three quirky dudes playing the music we love. We don’t party hard after the show every night, but the way we approach the stage is the same. We’re sounding better than ever, we’re very expressive, and our command of our instruments gets stronger every year. Our music, you marinate in it like it’s a sauce, and the flavor gets stronger and more potent with time. What you used to have in youthful energy, you make back in depth,  especially in the music we play.

How much did your Philly roots figure into your sound?

Being in Philadelphia had a huge impact on me. Early on, growing up by South Street, I was exposed to so much culture, music and people on the street. If you looked at South Street in the ’70s and ’80s, you met people from all walks of life: punk rockers, break dancers, gay people, rich people, homeless people, gangs. At the same time, you had these great restaurants serving gourmet food. It was a huge melting pot— everything you can imagine. A lot of that colorfulness worked its way into my music.

You live in the Boston area now, and I hear you’ve become quite fond of Cape Cod. How does the Cape compare to the Jersey Shore?

I grew up at the Jersey Shore, and I’ve been going back my whole life. Since I’ve been in Boston, I’ve fallen in love with Cape Cod. The Cape is a lot different  than the Jersey Shore; it’s more like the countryside on the ocean, and there’s a lot less people and a lot more landscape. I was very sad when I left the Jersey Shore, but like all things you love, you keep it close to you and move forward. I love that I still get to go back and play at all the clubs there every summer: Avalon, Ocean City, Brigantine, Atlantic City. It’s still a big part of me.

You released a Christmas album, Coming Home for Christmas, at the end of 2017. Do you have any other recording projects currently in the works?

I’m going to make a new G. Love record, so I’m in the initial stages of determining what direction to go in. Blues has  always been the backbone of my music. If you look back at my last three to four releases, there are still elements of hip-hop— they’re still funky and fun—but I’m drawn to a more “front porch” rootsy kind of music, so you can expect more of that. One of my goals is to achieve a blues Grammy.

What do you write about these days?

I’m in a good, stable place in my life. Now I’m writing about simple pleasures—the  simple things in life. … I continuously compile all these sticky words and melodies, and I put them together when I have the time. I want to make sure all my songs are inspired; if not, I’ll stop writing them. When I write, I write something because I have something in me to get out, whether it’s about drinking wine,  taking a walk, missing my family, my old neighborhood,  or it could be about riding a bike or the struggles of the world, and everything in between.

Photograph by B. Finney