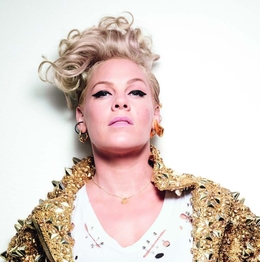 Back and Better Than Ever
After a brief hiatus, P!nk returns to the spotlight and learns how to balance marriage, motherhood and music.

Sitting across from me in a military green bomber jacket, combat boots and a soaring rockabilly quiff,  Pink gives the first impression of a woman totally in command and control of all around her.

The Doylestown, Pa., native’s booming cackle and exciting gestures give off the air of overwhelming confidence while an open, frank nature indicates someone entirely secure in who she is.

But appearances can be deceiving.

Chatting about her latest album, Beautiful Trauma, the 38-year-old mother of two admits her nerves often get the better of her.

“I still get very nervous for every new thing I do, every new thing that comes out,” she says. “Albums, tours, songs. Am I going to suck? Will I sound even more like Alvin and the Chipmunks? I won’t ever get over that and I probably don’t want to if I’m honest.” ever

Honesty. The heart and soul of the Pink image. Seventeen years after her breakthrough album Can’t Take Me Home thrust the young firebrand into the spotlight, she has kept her ever-growing masses of disciples guessing and the hits coming. “Get This Party Started,” “Stupid Girls,” “Try,” “Just Give Me a Reason,” “Just Like a Pill”—all chart-toppers around the world. And all delivered with her signature swag and style, a sharp contrast to contemporaries like Britney and Christina.

After rocking the beach in Atlantic City last summer, Pink will return to the area for another hometown show when she performs at the Wells Fargo Center on April 13. We sat down with the pop star and found her fun, flirty, irreverent and unbelievably down to earth. Like an old best friend, she opens up about her family, her guilt as a working parent, her enduring marriage to Carey Hart, her fears, her doubts, her anger issues and her struggle to remain relevant.

So it’s been five years since you released The Truth About Love; were you working on the new album all that time?
I never stopped writing, I never stop writing. I had 50 songs for this album that I had to dump, which hurt me bad.

But I’m always writing for other projects, for movies ... I did a Disney song. And then I made my meatball [laughs]. And I was raising another one and I know that’s no excuse, but you've got to give it to me there. I was doing bake sales, I was doing kindergarten, and five years sort of went by where I didn’t notice it happening. Where did it go [laughs]?

This is your seventh album; how does it feel different to your others?
They always say your first album takes 20 years to make, your second takes six months. This is my seventh, but it feels like my first, because of becoming a mom. Well I had [my daughter] Willow before the last album, but I raised her during the making of this one. I made another human being, and now it’s the question of whether I can stay relevant and I hope I can. I think I can. It’s reflective of what I’m feeling in my life in that chapter.

So you grapple with being relevant?
It’s been five, six years, that’s a long time to be away. Or at least, that’s what I keep getting told today. I don’t think it’s too long but apparently it’s a lifetime [laughs].

Looking back on the path your career has gone, what do you think of your first album, Can’t Take Me Home?
You know, I won’t sit here and say, I hate that album. I think it’s great, I still listen to those songs, they mean a lot to me, but they weren’t my songs, they weren’t what I had to say, and they feel less important to me than my own stuff. It was an amazing experience, I learned a lot and that’s what I teach my kids—well my daughter because she’s old enough—that everything we  do, no matter what the outcome; success, failure, what we intended or not, is a win because it just adds to life. And we’re  always learning; I never stop learning.

So how did the Eminem collaboration come about?
I’d already written the song [“Revenge”]. I loved it. And after drinking some wine, this was my light bulb [moment], I’m gonna email Marshall. And I’m like, ‘Marshall, I love you, I’ve always loved you since you signed your autograph for me at the MTV awards in 2001. You’re a genius, a lyrical master master, I love [your] sense of humor and I think you should work with me because I’m funny. I know Rihanna is beautiful but I’m funny, you’re gonna laugh with me.’ And I went on and on and he just wrote back, ‘OK.’

How honest is your husband when youplay your songs for him first?
You’d think he’d be the perfect soundingboard but honestly, I think Carey hastuned me out, [that] happened a longtime ago. I think now when I talk, he justhears static, soothing white noise.
I played him one of the songs fromthe album in the car and I rememberbeing so excited because it was a lovesong and then I asked what he thought,and he just goes, ‘Yeah, it’s nice.’
Your speech at the VMAs, that incrediblespeech for your daughter, did you expectit to have the impact that it did?
I made that speech for her. Well I hadanother one before but it was awful, so Imade this speech, solely for her becauseI wanted her to feel better. There was noindication it would hit so many people.And that to me is equally awesome andsad. It saddens me that so many wouldfeel this way. But it’s the reality of theworld and society. It’s not good.But a lot of people reached out tome, saying how much the speech helpedthem, helped their brother or sister,helped their child to realize their worth,realize who they are. That will alwaysstay with me.
Was she OK with you talking about her?
I bribed her [laughs]. No, I literallyasked, and she said yes.
How did she react to the speech?
She’s 6, she just took it as mom beingstrange and weird again. That’s me, I’mweird to her, I’m just weird.
That kid, she’s got this crazy, clear insight into things. She cuts through all the [stuff] with a knife ... she challenges me every day and I’m on my toes [laughs].
What did she say to you right after it?

‘How long before I can go to my sleepover?’ That’s all she cared about [laughs]. The actual talk we had that I referred to, a couple of weeks before, that meant so much more to her, because it was the two of us, that was the resonance for her, but at the actual awards, all she wanted was to get out of there.

What was your first speech like?
Oh it was really bad. I read it for Careyand he said, ‘That’s terrible, you can’t dothat.’ It was all, ‘Everyone said I couldn’tdo it but here I am.’ Awful!
How do you think motherhood has changed you?
It made me a lot more fun and goofy andless serious. I was always fun but then Iwent through a really dark period wherethere was kind of a cloud there but now,I’m really goofy and silly and all aboutthe laughs. There’s definitely flickers ofdarkness from time to time, but I justput [all] of that on the album.
What was this dark period like for you?
Just many moments with my mom that shouldn’t have happened. Arguments that shouldn’t have happened. But they did. I was very angry for a while, but I gotto exorcise those demons along the way,and you learn.
You recorded this album whilepregnant, what was that like incomparison?
It’s definitely a more sober experience.And after I had my meatball, you’re inthe studio, do a take, then run into theother room, pump, then back into thestudio again. With the other albums,there’s been mostly wine. Wine and lostmemories [laughs]. This one I remember very clearly.
And I also feel like, during my second pregnancy, my voice got more clarity,which was pretty cool. I never had that quality before. It’s gone now again sowhat can you do?
Will you have another child?
I don’t know. I love my babies with all my heart, but being a parent is hard, hard, hard. It’s a battle. You’ve got this little person in your arms who doesn’t want to be held, who doesn’t want to be put down, who’s hungry, who doesn’t want to eat, who’s tired but doesn’t want to sleep.
And I think, this kid is totally [messing] with me. And he knows he is. I feel like I’m pushed to my breaking point, and that’s when he’ll start laughing [laughs]. And I’m thinking, you fat little meatball, you are testing me. But he’s also a really good, beautiful kid. I can see his beautiful mind and soul. They both are; she’s a really good kid [too].
She’s very smart, she’s a ninja at psychological warfare, she impresses and scares me with her ability. She once— not even thinking about it—punched me in the pit of my belly. She looks at me, with pure intent, never looking away—and this was after her brother was born—she looks at me with total crocodile tears and says, ‘I never thought I would have to beg you for a cuddle.’ Wow. That’s what I mean. That’s what I’m dealing with [laughs].

How do you balance it all?
It’s a constant battle. I want my kids tosee their momma following her passionsand dreams but every decision, everychoice, cuts the wind to something elseand that’s hard to deal with, especiallyfor a helicopter parent like me, whonever really took off. I’m always there,lurking [laughs].I always feel like I can be a bettermom, every single day. But I know allparents have that same feeling, [that]same guilt so you do the best you canand live with it.
The aerial components to your liveshows are incredible, but do you everthink ‘I can’t do this, it’s too dangerous?’
The real truth is I hate heights. I’mscared of them but that’s kind of wherethe genesis for these types of performancescamefrom,wantingto conquerthatfear,showingmygirlthat.AndI’mstillscared,butItrytoinsertcliché,‘embrace,’thatnauseating feeling.
Every single time, why am I doing this? I know this isn’t safe. Screw conquering those fears, I want to lie down [laughs].
Photograph courtesy of Sølve Sundsbø
Published (and copyrighted) in South Jersey Magazine, Volume 15, Issue 1 (April 2018).
For more info on South Jersey Magazine, click here.
To subscribe to South Jersey Magazine, click here.
To advertise in South Jersey Magazine, click here.