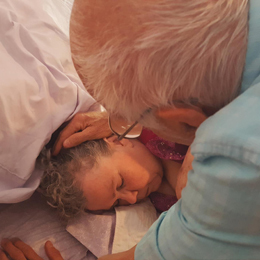 “What has it been like?” she says, slowly repeating the question. “Well, to be honest, it’s been hell.”

She sits at a wooden table inside Constellation Collective in Collingswood. Handmade artwork and green, leafy plants hang from the coffee shop’s walls. Morning light streams in through the window, but the rays do not touch her table. Instead of the sun’s warmth, the weight of Wolf’s words fill the space.

“It’s life,” Wolf continues. “In fact, its almost guaranteed if you make it into adulthood with your parents still in your life.”

Many families, including Wolf’s, know the wrath of Alzheimer’s disease.

It slowly erases its victims’ identity, their memory and cognitive thinking skills, and eventually how to carry out even the simplest tasks needed for daily survival, like eating and breathing.

“Alzheimer’s disease bestowed a terrible grace upon my family,” Wolf says, sipping her coffee. “I have felt its wrath tenfold.”

In 2010, her mother and father, Nancy and Louis Brood, were diagnosed with dementia, a severe form of Alzheimer’s. Wolf, just shy of turning 30, found herself looking after them; tucking them into bed, feeding them, helping them get dressed, administering daily medications and paying the bills.

She has shared her experiences with the world on her blog, UpsideDown- Daughter.com, because she has been forced to raise her parents in reverse.

“I do not consider myself a martyr or a saint,” Wolf says, trailing her thumb around the lid of her coffee cup. “Although I have been called both, the decision to care for my parents came from my heart. It was the right decision for all of us. And despite everything, it’s a decision I would make again.”

Although Wolf’s parents were diagnosed within the same year, their experiences were drastically different.

For her mother, who died surrounded by loved ones last Feb. 10, the attack was swift and vicious. For her father, the disease has been more like a “gradual creep into confusion.”

“Even the moments when dad did comprehend— the mornings my mother sat slumped and drooling over her cereal bowl, the days she fell into inconsolable hysterics, the nights she kicked and clawed and shouted from the bed—even those moments faded quickly from his memory,” Wolf says.

The “Upside Down Daughter” first learned of her parents’ failing health while living in Vermont in her late 20s.

“They called me one day in March and started singing, ‘Happy Birthday,’ which was unsettling,” she says. “My birthday is in May.”

Her uncle called, too. He and Wolf’s father had owned and operated an upholstery shop in Philadelphia for more than 60 years.

“It was a small family business so he knew how to do everything, from sales and reupholstering to carpentry and drapery work,” she says. “I still remember the day my uncle called and said he could no longer do simple math.”

Wolf decided to move, with her nowhusband Casey, back to New Jersey. In May 2013, she finalized plans to move her parents into a facility.

“It lasted three days,” she says, turning away to look out the window. “My dad was still ‘with it’ enough to call us. I remember getting a message from him, weeping, saying, ‘It’s Daddy. Please, me and Mom want to come home.’”

Everyone, including doctors, told Wolf to leave her parents and allow them to adjust.

“I couldn’t,” she says. “I would never judge the people who do, but I couldn’t.”

So, Wolf settled into the role of primary caregiver for both of her parents, describing those days as “wild, unpredictable and grueling.”

Each morning began with giving her father his medication and taking her mother to the bathroom. If her mother had an accident, which she usually did, Wolf had to give her a bath. Breakfast was also a challenge. Her mother stopped swallowing pills willingly—for diabetes, hypothyroidism, high blood pressure, seizures and hallucinations—a few years before her death, so Wolf had to hide them in chunks of banana.

At night, Wolf and her husband barely slept.

“We installed a motion sensor so that every time their bedroom door opened, a receptor in ours binged,” she says. “My mom used to wander into the hallway. It used to go off maybe six times a night. Some nights it felt like every half hour.”

Wolf recalls one night her father was up so many times, and she was exhausted and overwhelmed.

“I cried in his arms, begging him, ‘Please, go back to sleep.’ He didn’t understand, but he was holding me and crying, too, saying, ‘I’m so sorry. I’ll do better. I’ll do better.’”

It has been nine months since her mother died, and the house is more quiet, she says. But life is still a daily challenge.

When Wolf is not tending to her father’s physical care, she strives to keep his emotional well-being as strong as she can. This includes keeping a $20 bill in his wallet at all times.

“He still has some self-awareness, and I want to help him preserve as much dignity as possible,” she says. “I construct reality so he can feel like he is contributing. I make sure he has a $20 in his wallet, in case we want to order pizza and he wants to pay, even though he isn’t really paying.”

Her father still goes to a day program for adults with Alzheimer’s and dementia. Five days a week, he gets picked up at 8:40 a.m. and comes back around 1:30 p.m.

“I’m always looking for more activities to do with him,” she says. Their favorites include car rides to ice cream shops, and playing piano and singing the words to beloved songs still within his memory’s reach.

Wolf’s own emotional state has changed since she began caring for her parents. She says the disease has taught her how to live “in the moment,” because things change every day. In addition to sharing her story online, she sees a therapist and lifts weights at the gym, all of which she says, “help keep her sane.”

The experience has also fostered an unbreakable bond between Wolf and her husband, who has never left her side, or that of her parents.

Once in a while, though, Wolf thinks about what she’s given up.

She and her husband have decided not to have children. Her often overwhelming feeling of grief or loss is felt in the form of loneliness, she says, and Wolf no longer knows how to relate to people her own age.

But when she looks at the bigger picture, she still feels like she’s been given a gift: The terrible grace of Alzheimer’s disease has helped reshape the bond between her and her parents which had been strained since adolescence.

“The disease changed our entire dynamics, the history of our relationship,” she says, smiling. “However many years down the line, when I look back, I’ll think of the moments of tenderness I was able to share with them, and I know I will be comforted every single day.”