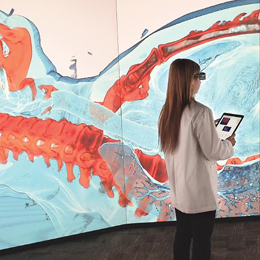 In a room at the South Jersey Technology Park on Rowan University’s campus, a group of engineers, city planners, students and community members stand together in a North Camden neighborhood. Surrounded by houses and trees they stroll the blocks as a rainstorm hits and the streets begin to flood. But this group doesn’t need to find cover. The scene in front of them is a simulation displayed at the Virtual Reality Center, a room of 7-foothigh and 40-foot-wide screens wall to wall, essentially allowing them to be in two places at once and examine a real-world scenario in a virtual environment.

In an effort to study flooding in Camden’s Cramer Hill neighborhood, Cooper’s Ferry Partnership worked with researchers at Rowan’s VR Center, including Dr. Shreekanth Mandayam, VP for research at Rowan. Engineers were looking for the best placement of new storm water management systems and needed to do so economically. “Over a period of eight to nine months, Rowan students mapped and collected data in Camden, bringing it back to the VR center and building a faithful representation of houses, streets, trees, then interfacing it with an ecological model showing where max flooding occurs,” says Mandayam.

“Where it gets really interesting is when we invited everyone inside to view the simulation … we presented where we thought work should be done, but it was the community members who told us that spot was the only park for children to play,” he says. “Engineers were able to consider other options with the community’s input, people who really know the neighborhood, and come up with a solution that is acceptable to all. That’s the power of virtual reality.”

For many, this is the real value in virtual reality (VR) technology. Most people are familiar with its uses for entertainment and gaming—smartphones and headsets like Google Daydream bring VR to our fingertips, but those are just small samples of what this technology can do, and if you ask Mandayam, those genres were never originally intended for VR.

“I never saw virtual reality as gaming or entertainment,” he says. Mandayam says the technology was always used for research. “We used it in the mid-’90s to inspect gas pipelines underground and our job was to figure out what to do if there was a crack: to dig or not to dig? Inside the pipe in virtual reality, we could break free above ground from the fault and see where you are,” he says. “From there, our projects involved NASA, NAVAIR … most of our work has been to use these aspects in a very scientific manner, analyzing complex data and asking ‘what if’ questions.”

At Rowan’s VR Center, Mandayam has helped various organizations create models, including one for logistics involving the papal visit to Philadelphia, as well as the National Association of Fire Investigators where firefighters could train on how best to stop the spread of a fire in a home.

The VR environment—one that appears real but isn’t—fully immerses participants, allowing them to navigate and interact with it on multi-dimensions. The field of medicine has been taking full advantage of this technology to gain valuable insight and training. Students in the department of radiologic sciences at Jefferson School of Health Professions experiment on virtual “patients” using software called Virtual Environment Radiotherapy Training (VERT) while wearing 3D goggles.

Matthew Marquess, program director for radiation therapy at JSHP, says students gain experience by making mistakes and learning from them before moving on to real people. “We are able to replicate clinical situations in the lab and it allows students to visualize abstract concepts in a controlled environment. Radiation therapy concepts require a lot of spatial reasoning, the virtual reality software helps students visualize these concepts more effectively,” he says.

“I think there is a big push in the medical community for virtual reality training, especially for physicians in training. I think a virtual reality simulator for surgeons would be a great tool, as opposed to having a medical student or resident cutting a person for the first time without any training in a controlled environment.”

For Dr. Robert Perez, who specializes in robotic surgery at Virtua, learning to work the robot and its components takes practice, which is done virtually on a simulator. “The robot tool is very complex, and we are able to walk through every device, how they move, grasping items and moving pegs through a board or suturing,” he says. “You are scored on your progress through these tasks and credentialed surgeons need a certain score.”

Perez allowed a third-year resident, rotating in the OR, who had spent time practicing on the simulator the day before, to perform suturing inside an abdomen with the robot. “He had never been on the robot before but he was able to do the suturing successfully— and well—because he had been on the simulator,” Perez says. “It does make you better.”

Rowan’s VR Center has helped health professionals from its two medical schools see things a bit differently, too. When the chair of neurosurgery at Cooper Medical School of Rowan University toured the VR lab, he mentioned how beneficial it would be to see a patient in 3D. “As a neurosurgeon, he has to figure out a path to surgery in the brain using only X-rays and MRIs on a 2D screen,” says Mandayam. “He wanted a way to do the surgery virtually first.”

It took three years and funding from medical manufacturers until the VR Center was able to create a virtual scalpel, letting surgeons examine a virtual cadaver and peel away the layers for the best approach. “The goal has always been to use the power of VR to do good science and engineering,” says Mandayam. “It’s not going to give you a new scientific method; it’s a visualization tool. Humans can arrive at better decisions at a lower cost.”

VR is also being explored to help those who have been diagnosed with autism or PTSD. Bancroft previously used the technology on veterans coping with traumatic brain injuries or PTSD addressing their anxieties in a virtual reality-like setting. And doctors are studying how children with autism spectrum disorders can improve their social functions through VR that simulates different scenarios like finding a seat in the lunchroom or playing on a playground and lets them practice these interactions in a safe environment. Those who fear going to the dentist may also have relief through VR in the future as studies have shown patients who wore a VR headset while having dental work done reported less pain and discomfort afterward.

The aging population could also benefit from VR. CareOne, a senior care company with locations in South Jersey, recently introduced a virtual rehabilitation system that guides patients through interactive exercises with less physical risk. Elsewhere, organizations are looking into how those with dementia or Alzheimer’s can be calmed through the help of a VR headset that depicts a soothing surrounding.

The opportunities for health, science and research are seemingly limitless, but not to be overlooked are ways for the private sector to incorporate VR technology into their business model. Take fast-casual eatery Honeygrow, for example. The burgeoning Philadelphia-based company with a location in Cherry Hill—and soon to be Marlton— uses VR for onboarding new employees.

“Virtual reality is clearly a space in technology that has been at the forefront of marketing and we use it not just for technology’s sake,” says Jen Denis, chief brand officer for Honeygrow. The motivation behind VR employee training was the desire to give every employee a consistent experience. As the company got larger and grew into different markets, it became harder for its founder to be there in person. VR brings the founder to every employee, no matter where they are, says Denis.

The training video was filmed at Honeygrow’s Cherry Hill location this past January, and the company has been actively using the technology since May. Using a Google Pixel smartphone inside a Google Daydream headset and a remote for interaction, employees go through every aspect of the restaurant. “It opens with the founder welcoming you, then you look at the stations behind the line, the dining room and even how food is organized in the walk-in [refrigerator],” Denis says. “We find it useful because it’s a consistent message from day one, and it’s used even for hires on the corporate side.”

The entertainment value keeps employees engaged—more so than a typical training handbook does—and information is more likely to be retained. “They are fully immersed in what’s being told to them and they understand that technology is something we value as an organization,” she says.

Honeygrow is in discussion with Google about new prototypes for food education, showing employees where certain foods come from and how it’s prepared. “If we can use VR to make our teams more educated and more well-rounded, that means a more wholesome experience for our guests,” Denis says.

Growing interest in VR, even if it does have entertainment value, is one avenue for getting the next generation involved in STEM careers. “We do use this as a recruiting tool for students,” says Mandayam. “Maybe they only know it for gaming, but through it they will learn to write code and build models using math and science skills.”

And for the rest of us hoping to get our hands on some VR of our own, signs point to access sooner than you may think. “I’m confident that we’ll one day take this tech for granted, like WiFi,” Mandayam says. “In five to 10 years, it’s going to be everywhere. You will expect it to be wherever you are going—the office, the airport—that’s where this technology is going.”