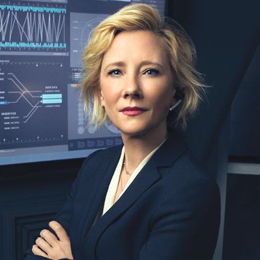 When Anne Heche enters a luncheon at the posh Hotel Andaluz in Albuquerque, N.M., it is as if she has ushered in a cool and refreshing summer breeze.

With short-cropped blonde hair, and sporting a cream-colored dress, it is clear that the charming and sprite-like, 48-year-old Emmy Award-winning actress, who grew up and came into her own at the Jersey Shore, has made her indelible mark in television, stage and film.

It is also clear that spending an afternoon with her is nothing less than cool relief in the intense heat of the New Mexico sun.

Having to deal with desert heat is just one adjustment the devoted mom of two young sons is gladly making for her current starring role in NBC’s military drama, The Brave, a riveting new heart-pumping show that offers a rare glimpse into two teams of elite U.S. undercover military heroes; one led by Heche’s character.

The themes in her life are echoed in the highly emotional scripts: honesty, trust, standing up for your convictions and beliefs, and the importance of empowering women to be role models. She also believes in letting your heart rule your life.

In The Brave, (airing on NBC on Mondays at 10 p.m.), Heche plays Deputy Director Patricia Campbell, the head of operations for the U.S. Defense Intelligence Agency.

From headquarters in Washington, D.C., she uses the world’s most advanced surveillance technology to boldly lead her analysts. At the same time, a second team is led by Warminster, Pa., native and Under the Dome star Mike Vogel, who is also working 12-to- 14-hour days on the new TV drama.

Choosing this role at this particular time in her colorful career is also about family, and some of the life lessons she hopes to impart to her sons as they grow into young men. “One of my main goals for my children, and it resorts back to The Brave,” she says, “is that we look at what we can do to help others.”

She believes that people often fall short of this goal because “most of us don’t think we’re responsible to help, and we don’t really know what’s going on in the big picture.”

So, Heche sees The Brave as more than pure entertainment. “This show is an opportunity to watch the true stories, and see how things actually work in war, and I am hopeful that it will ignite some minds to ask, ‘How can we fix this?’ It may take some time, so I hope our show will be on the air for years to come.”

As Heche thinks back to what inspired her to pursue a career in the performing arts, she has vivid memories of growing up in “an amazing, old house,” on Ventnor Avenue in Atlantic City.

Her imagination was sparked by the treasures that were left behind in the house. “The woman selling it had left behind all of her grandmother’s clothing, and so we went up in the attic and just discovered all of it,” Heche explains. “It was just what you want an attic to be; filled with antique lace dresses, and scores of hats, and all of this crazy old paraphernalia, and I loved all of it!”

While she admits that she was a bit of a loner—the family moved 11 times during her childhood—all of that changed when at age 12 they moved to Ocean City, and that family-friendly resort town would become the locale of her first creative outlet.

“That’s where I first became an actress,” she says. “I literally started singing for my supper, right on the Boardwalk. I would flip burgers and sing show tunes to get people to come to our stand.”

Next came singing at her church, and her first paying job was for $100 a week at the 76 House Dinner Theater in Swainton.

“So, you could definitely say that New Jersey changed my life,” Heche explains. “I will always have a soft spot in my heart for Jersey.”

She has come a long way from the South Jersey Boardwalk and dinner theater. This was followed, shortly before her high school graduation in 1987, by a dual role on the daytime soap Another World, for which she received a Daytime Emmy Award for Outstanding Young Actress in a dramatic series. All of this led to film, Broadway and TV success.

Her many TV roles include: Men in Trees, Save Me, Aftermath and Dig, which was also filmed in New Mexico. Her career success has included an Emmy nomination for the Lifetime movie, Gracie’s Choice, and a Tony Award nomination for best actress in a Broadway play for Twentieth Century.

With Heche’s extremely active career, which often entails taking on very complex roles and frequent travel, she is keenly aware of her juggling act as a hands-on mom of two young sons: Homer, 15, and Atlas, 8.

“For me this show is pretty ideal scheduling-wise because I work half the week from the office that is the show’s command center,” she explains, “and I am home with the kids the other half.”

The show’s creator and executive producer, Dean Georgaris, is thrilled that Heche agreed to be his leading lady for his new show. “Working with Anne is incredible,” he says. “Not only is she one of the most talented actresses in the world, she is also one of the kindest and most generous people I know. Every day I go to set, I count my lucky stars that she said yes to the role.”

Georgaris says that that off the set, “Anne is one the warmest, funniest people you could hope to meet. She’s the kind of person who knows everyone’s name on a crew of 230, and since we have a number of actors who are relatively new, she’s always finding ways to support our young cast, both as actors and as people.”

If all of this wasn’t enough, the selfdescribed “den mother” holds ‘Sunday Fundays’ or weekly Anne Heche specials. “She will bring together the cast and non-work friends for epic meals and afternoons filled with games,” explains Georgaris. “She has managed to make filming in a distant location feel like we’re filming at home.”

During a recent visit to the Albuquerque set of the show, she and her co-stars are eager to talk about the enormous obligation they have to the men and women in the military, who are the inspiration for the stories.

“It is an honor to be a part of a project that is so respectful of those who serve,” she says, “and it is amazing to be a part of it. Being part of this show keeps getting better and better.”

Another aspect of The Brave that Heche relates to is how authentic the characters and the plots seem. “There are no limits to this show,” she says. “I think this is a way to say thank you to all of the people who sacrifice themselves for our country. So, because we take it so seriously, there are no ceilings to where this can go.”

Her stoic and unemotional character of Patricia Campbell certainly has her own quirks and baggage; in the show’s pilot, we discover that her TV son, who is in the military, has been killed in action in Afghanistan, and viewers will be interested in how she deals with the tragedy.

“I have no reason to think that my character has a sense of humor about anything, and that’s a really different way to approach this work,” Heche says. “It’s not just about her clothes, her make-up and her overall look; it’s about her team and how she runs it, and everything else that makes her tick.”

While the show is still in its infancy, Heche has given her portrayal a great deal of thought. “Patricia is a huge character, because if you don’t trust her, you won’t trust the show,” she says.

“You have to trust that Patricia can make the decisions that are the right ones, because they are about life and death. She has to take responsibility, and that’s why her physical world— including her desk, office and even her paper clips—have to be as organized as her brain.”

In addition to The Brave, her next movie to be released is My Friend Dahmer, a heavy film in which she plays the mother of serial killer Jeffrey Dahmer. She also has coming up, Catfight, a rather dark movie she made with Sandra Oh, about bitter rivals who pursue a life-long grudge match, and another film The Best of Enemies, coming out next year, with Sam Rockwell playing a Klan leader.

Since Heche has played drama as well as romantic comedy, one has to wonder which she prefers. “I love it all,” she admits. “It’s just different parts of my personality.”

When asked what the perfect day, or week would look like for Heche, she says she truly wants to live like “a retired person, but actually not be retired. I’m realizing that when I’m not working I need to just enjoy life.”

What appeals to her about retirement, “is that you make time to sit down, read books and spending all of this time being quiet means I can be as loud as I need on the show.”

Breezy and comfortable is the way that Heche chooses to live her life— both at home and at work. “Obviously, the more realistic everything is, the easier it is. The less I have to act, the better my life is, and that’s truly how I deal with everything in my life.”