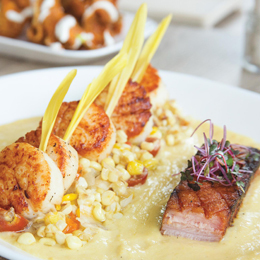 Opened in May, The Farmhouse is a year-long dream-turned-reality for Stu Wanicur, a local man who worked in large-scale food service before taking the plunge into dining. Wanicur bought the former La Campagne, a massive white building on Kresson Road just outside of Haddonfield’s main drag. Over the course of four seasons, he worked at reviving the forlorn building, which sat dormant since the former French eatery closed in 2012.

Several coats of paint later and The Farmhouse was born. The revived space is a play on the building’s farmhouse structure, with small, intimate rooms breaking up the interior. While each room contains only a few tables, at a full dinner service the restaurant can be quite loud between the half-open kitchen, diners and guests.

Luckily, the dining room extends outside to a gorgeous patio area filled with French bistro-style seating. Tall shrubbery blocks out the hustle and bustle from its busy neighboring road, creating an enchanting garden area.

Local and fresh foods are the foundations of The Farmhouse, as the kitchen stays in the neighborhood, using as many vendors from the tri-state area and featuring ingredients almost entirely from the United States. That means they have no microwaves or freezer in the kitchen, and all leftover food is sourced out to farmers who in turn provide fresh produce and proteins.

The volume of the rooms and the menu make this an ideal group setting, together crafting a more inviting space that aligns with a selection of shared plates built for a crowd. A snack of Lancaster chicken skins was probably too big for my table of two, but would be perfect with friends, featuring pieces of chicken skins fried until crispy like a pork rind, then coated in Buffalo sauce and served with Hidden Valley ranch crema. It was a really inventive take on the Buffalo wing and a fun way to start the night, though the crema lacked any differing taste than what comes out of the bottle.

Seasonal dishes play a big part in the menu that changes regularly—and features pairing wines from Coda Rossa Winery in Franklinville—and a small plate of fried green tomatoes is a dish that makes me wish it was summer all year long. Slices of sweet green tomatoes are battered and fried and served with house-made pimento cheese and a drizzling of salted tomato caramel sauce. A bit more salt and pepper would have made this the perfect dish, but when combined with the cheese and caramel sauce each bite was texturally and flavorfully cohesive.

The entrée selection was exciting in itself as it played to the locovore trend in playful and familiar ways. In fact, right next to the list of dinner dishes sits “The Local List,” which features the selection of farmers, butchers and fishermen that were the stars of the evening. A plate of scallops came straight from Barnegat Light, seared lightly and served with sliced Jersey corn, beautiful mini heirloom tomatoes, thick chunks of slab bacon and leeks over a sweet corn puree. The freshness of all the ingredients brought the entire meal to another level, as the scallops were plump and juicy and the sweet corn remained bright even after cooking.

Farmhouse’s steak frites paid tribute to everyone’s favorite local dish, the cheesesteak, by preparing their nineounce filet mignon “Philly” style, slicing it and topping with Cabernet sautéed onions and Cooper Sharp cheddar fondue. Everything on the plate—from the hand cut fries to the sliced steak—could have used a heavy pinch more seasoning, since the only real hit of salt or pepper came from the cheese sauce. But it was an entertaining dish and the creativity was not lost on me, especially when it comes to something as traditionally simple as steak and potatoes.

The night ended with a selection of desserts made in-house by The Farmhouse’s pastry chef. Key Lime cheesecake jumped out to me right away, a fitting way to end a meal with plenty of Southern flair thrown in the mix, but it ultimately left me wanting more of that Key Lime flavor you find in the traditional pie.

While there were a few minor shortcomings flavor-wise that can be expected with the growing pains of a new restaurant, I can’t help but love how innovative The Farmhouse menu was from start to finish. The dishes were just familiar enough to bring in a new diner, and the way the plates were reinvented using local ingredients only enhanced the dining experience. Now all that’s left is to sit back and see what’s in store for the approaching fall season.