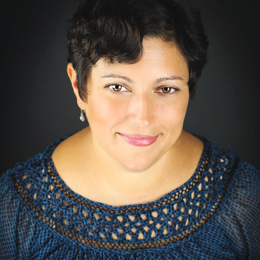 When Elizabeth Braden first tried her hand at music, beginning with piano lessons at age 7 and school musicals only a few years later, little did she realize her series of musical endeavors of weekly lessons, musicals, choirs and school bands would place her amidst the rehearsal hall of Opera Philadelphia—as the third female conductor, nonetheless. In fact, it wasn’t until graduate school at Westminster Choir College in Princeton that she discovered her true passion for opera.

“Opera began for me when I was a singer in the Spoleto Festival Choir in Spoleto, Italy, where we sang concerts and were the opera chorus for all of the festival’s opera productions,” she says. “I may have caught the opera bug those early summers singing in Spoleto, but I have come to love and value it so much during my years at Opera Philadelphia.”

Being chosen as the organization’s third female conductor throughout its 43-year long history in Philadelphia, Braden couldn’t be more honored and humbled to make a lasting impact in what she describes as a predominantly male industry. She hopes to not only put on a successful grand premiere of The Wake World on Sept. 18, but hopes along the way to inspire and encourage women of all ages and professions to simply never say never.

Settling down in South Jersey…

I grew up in Easton, Pa., but after finishing college in West Chester, I attended graduate school at Westminster Choir College in Princeton. My wife and I moved to Collingswood about six years ago when our son was 2 years old.

We moved here because we heard it was a great community with diversity and great acceptance for families of all kinds, among good schools and a great restaurant scene. We’ve fortunately found all of these things to be true—there is an incredible sense of community here, a wonderful downtown with shops, restaurants and coffee shops, and it’s very family friendly. A great bonus is the amazing proximity to Philadelphia—I’m only a quick 15-minute train ride on PATCO to the Academy of Music where most of our opera takes place. … It sounds as if [Collingswood] has always been a strong community, but now more well-known with more attention to things that will bring people into the town for a dinner, a visit or to even stay.

Getting started in opera…

My opera experience began in college and graduate school, when I was a singer in the Spoleto Festival Choir. The director of that choir was Donald Nally, who was the Chorus Master at Opera Philadelphia before me, and who was also a professor and mentor of mine. I learned music from these experiences and grew to love opera. Opera is incredibly fun and exciting because it ties together many aspects of the arts and requires a lot of collaboration between art, production, etc., to come together in order to create a successful production.

Making her presence felt in the industry…

Conducting is a male-dominated field, though women are making some inroads. I think that in the field of choral conducting, women are more prevalent than in the field of orchestral or opera conducting— though hopefully, all fields will become more equitable in coming years. Since The Wake World was written to feature our chorus, I’ve been successful with preparing and conducting our chorus over the years, and I believe it was a testament to my success here.

What I believe makes [The Wake World] special, is how it came about—namely, that it was written to feature the Opera Philadelphia Chorus specifically. Since The Wake World will be performed at The Barnes Foundation, composer David Hertzberg knew that we would be performing in a large and very acoustically live venue, so he wrote some amazing music that will just soar in this wide open space, very different from the average opera hall. Lastly, and perhaps most importantly, I think the music is very special. There are passages that, when I play them on the piano or sing them in my head, I’m almost moved to tears at their beauty.

I hope that my role as the only female conductor in Opera Philadelphia 2017 provides hope to young women in music— or any field—who want to succeed in a field which is still predominantly populated by men. I also hope we can move toward a time when being a female conductor isn’t so unusual. Women tackle great roles in fields all over the Philadelphia and New Jersey regions; and I’m proud to be among those numbers.