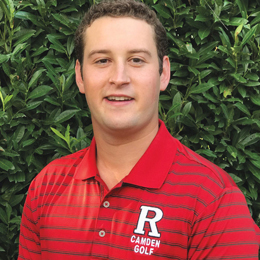 At 22 years old, Sean Sanchirico has experienced what most young, healthy adults shouldn’t have to—yet, you wouldn’t be able to tell, what with the Rutgers University— Camden rising senior’s positive disposition. Not only did he endure a misdiagnosis for two years, he later came to find his symptoms were caused by a brain tumor, which resulted in the swelling of his optic nerve and having double vision.

“When I first found out I had a tumor, I was almost relieved in a sense,” explains Sanchirico, who first got sick in the summer of 2012 as a rising high school senior and until 2014, both himself and his family have been shrouded in endless questions and countless hours of research to find some kind of answer.

What started as a loss of appetite and constant vomiting, Sanchirico’s condition only worsened as he began losing weight. Doctors diagnosed the then 18-year-old with gastroparesis, a condition otherwise known as stomach paralysis. “It was really hard for me to function, but I just wanted to focus on my senior year and preparing for college,” he says looking back. “I didn’t want [it] to take time away from my experiences, [but during] my senior year, I spent a couple times in the hospital … to keep me nourished because if I wasn’t eating, I was continuing to lose weight.

“With my senior golf season, I didn’t let it stop me,” he continues. “I played golf and I was getting sick on the course. … It fazed me, but I didn’t want it to too much. I was pretty nonchalant about it [and] sometimes the kids wouldn’t know I had gotten sick or whatnot, so I would just kind of step off to the side and get sick.”

This was par for the course, as Sanchirico continued through the rest of his senior year and looked to his collegiate future when he was contacted by the Rutgers University— Camden golf coach. “I decided to go there and play golf and my freshman year went well, but I was still battling the ‘stomach problem,’” he says.

“Similar to my senior year, this was my first semester in college so I wanted to experience it and enjoy going to a new school, making new friends, being on a new golf team; I didn’t want my sickness to take too much time away from that. I got through it the best I could, but I wasn't losing weight anymore because I was on medication that would cope with it, but I was still vomiting every so often.”

Unfortunately, Sanchirico became his sickest during his sophomore year in 2014, and as a result, pushed off fall golf and in October, began experiencing random double vision. Within a week’s time, Sanchirico visited an ophthalmologist, who discovered his optic nerve was swollen, and quickly referred Sanchirico and his family to Penn Medicine, where he was ordered an MRI and thereafter, diagnosed with a brain tumor.

“[The doctor] sat us down and said, ‘Son, you have a pretty large tumor in there. Quite honestly, I don't know how you were even functioning for however long you did with this,’” recounts Sanchirico. “The next thing you know, he said we’re operating on Monday. They admitted me and I was getting surgery on Oct. 6, 2014.”

On that day, Sanchirico’s doctor completed a 100 percent tumor removal during an eight and a half hour operation— however, there were side effects. Due to the tumor’s size, Sanchirico’s brain had adapted to it and without it, the brain didn’t know how to function.

“The double vision had actually worsened after the tumor was removed,” Sanchirico explains. “I still have constant double vision to this day, but what’s worse was my balance and coordination, so I spent time [in physical therapy] for about four-to-five weeks to regain my balance and some strength and coordination. … From there, I went home and I started 30 treatments of proton radiation … to ensure that this would never come back.”

With his final radiation treatment completed right before the ball dropped in 2015, Sanchirico had one goal in mind: get back on the golf course. “Even after surgery and working in physical therapy, I said to myself, ‘I’m going to get back to the golf course. I'm going to work hard, go out there and be a collegiate golfer again.’” Despite doctors telling Sanchirico he wouldn’t get back to his club and golf ball anytime soon, he surprised everyone by getting back to the driving range in no time and taking classes again that summer of 2015, and going full time in the fall.

Today, Sanchirico continues to experience double vision—despite undergoing two eye muscle surgeries since his brain tumor surgery. “[It’s] fixed to a certain extent, but it’s something really hard to deal with because, not just my eyes are affected, but my brain was affected, so it may never be perfect again.”

Despite his prognosis, Sanchirico is full speed ahead, as he’s gearing up for his senior year of college, while finishing up his summer internship with Penn Medicine as a marketing intern and leading his golf team as the only senior. “My next goal is to really be a leader and be a bigger part than I already am on the golf team.”

As for his double vision, seeing two golf balls hasn’t stopped Sanchirico either. “For a while after my surgery, I wore an eye patch … and that was more for the eye appearance because after surgery, I was a little self-conscious of it and it did help me see single,” he explains. “Now I just wear one contact lens in my left eye so the other image from my right eye is blurry. … I know what image to focus on and I’ve gotten used to it.”

Sanchirico’s goal-oriented mentality and outlook is what keeps him motivated—despite being dealt a hefty hand. “I want the double vision to at least be fixed and I’m confident that someday down the line it will be, but I’m 22 years old. I’m going to be a senior at Rutgers in the fall and I want to get good grades, I want to excel on the golf team this year and I really want my primary focus and research [to be] on landing a good job that I’m happy and comfortable with.

“I don’t like to say that my health is in the background, but I take a similar approach to my future, whether it be this year or years to come, I want to live my life and try not to get down about it because other than the eyes, I’m perfectly healthy,” he adds. “I tell myself, why wait to see if you can get better when your eyes get better, why not just work on it now? Why not try to get better now, when nothing is really stopping you? There are times it can be bothersome, but at the same time, I know that I can still conquer anything and live as much as a healthy life as possible.”

This positive outlook—that kind that is born out of overcoming struggle—is also bolstered by Sanchirico’s parents, who despite watching their son’s health worsen during those past few years, have helped him see the good in it. “I have so much love and appreciation for my parents, as well as for helping me fight through this and keeping me motivated, no matter what. They’ve really been my backbone through it all.

“I look at everything that happened to me as a second chance at life,” Sanchirico continues. “For over two years, in my senior year of high school and in the beginning of college, it wasn’t the best experience for me because I was sick. … This is [my] second chance at becoming a young man instead of deteriorating, at excelling in my career and my golf game instead of going the opposite way like I was for so long. That’s something I’m really thankful for and definitely something I take advantage of and still do to this day.”

As for Sanchirico’s next goal? He’s ready for any opportunity that knocks at his door—whether it be a future in golf or a job in business and marketing. “I’m in an incredible place and point in my life that I don’t want to get down about the double vision, I want to be optimistic. … If [this is] all that has come out of that long journey, then so be it. It could have ended up so much worse so that’s a positive my family and I have taken and that’s the approach I take with everything, whether it’s at work, the internship or playing golf, I just take that in, try to enjoy it and [not] let it bring me down.”