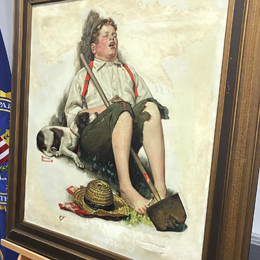 In June 1976 a burglary occurred at the Cherry Hill home of Robert and Therese Grant while the family was vacationing in Ocean City. Their prized Norman Rockwell painting—referred to as “Lazybones” or “Boy Asleep with Hoe”—was gone.

Years turned into decades and the painting never turned up. “My dad always said someday we’d get it back,” says John Grant, who lives in Ocean City now. “I never thought I’d see it again.” But as fate would have it, after nearly 41 years of wondering what happened to it, the painting was delivered back into the hands of the Grants.

The tale of the Rockwell painting captivates anyone who hears it. Robert Grant acquired the painting in the early ‘50s when he was playing pool at a friend’s house and put a hole in it with his cue stick. He bought the painting from his friend for less than $100 and according to his son, it became his prized possession.

“He had it insured in the early ‘70s and it was appraised for $15,000. It hung in the entryway of our home,” Grant says. The family never stopped talking about it after it was stolen. “Dad loved the painting; there was just something about it.”

A few years after his father passed in 2004, Grant was going through some papers and found a folder with a Polaroid of the painting, along with a police report and the insurance claim. “It got me thinking about it, so I wrote to the Cherry Hill police and I was told it was still an open case and that was the end of it,” he says. Then a friend of his introduced him to a retired FBI agent, Bob Bazin, who started making calls on Grant’s behalf.

Bazin called newspapers and investigated any leads. He did this for six years, and then in July 2016, on the 40th anniversary of the robbery, he tried a new strategy with the help of some agents from the FBI’s special division art crime team in Philadelphia. This division investigates matters involving art and cultural property violating federal law, and assists local, county and state investigations.

Special agents Jake Archer and Don Asper were contacted by Bazin regarding the case.

“We felt this was important to look into because it involved a quintessential American artist and it occurred here in the Philadelphia area,” says Archer. “We felt like, if we could coordinate a media plan, as well as do some cold case investigative work, we have a chance. We crafted a 40th anniversary media blitz to get out as much information as possible.”

Within a few months, someone came forward wanting to turn over the painting. (The FBI declined to comment on the person’s identity and this person is not being charged with a crime.)

Archer says the Grant family was notified immediately of this development in the fall of 2016, but further investigation was needed to ensure its authenticity.

The emotional reunion finally happened this past March at a news conference at FBI headquarters. “It was just surreal to see it,” says Grant. “The hole from the cue stick was still in it.”

The moment was equally appreciated by agents Archer and Asper. “It was [a feeling of] overwhelming relief and truly a great moment in our law enforcement careers, to reunite them with something that meant so much to the family after so long a time,” says Archer. “We were fortunate to have a great working relationship with all the people involved. It was a great team effort.”

Grant says he is grateful for the years of work Bazin put in and the current FBI agents who helped publicize the missing painting.

So where is the painting now? “It’s hanging at the Norman Rockwell Museum,” says Grant. “We had it restored and it looks unbelievable. It’s on display right across from [Rockwell’s] first Saturday Evening Post cover—ours was his 22nd—and we are thrilled to have it there.”