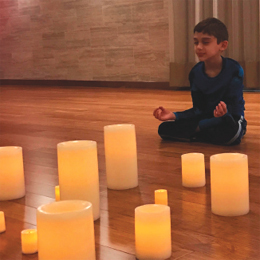 Take It to the Mat

In honor of National Autism Awareness Month in April, supporters took to the mat at Life Time Fitness in Mount Laurel, where yoga instructor Lisa Gonzalez led a LifePower Yoga sensory-friendly class, designed for those with special needs and their families.

“Anybody can do yoga as long as you have breath,” says Gonzalez, who is also an elementary school teacher and a mother of three children, one of whom has autism. She started the class in an effort to help give those who have autism, or any special need, a place to feel welcomed.

According to Gonzalez, studies have shown there are a lot of benefits to breathwork and this class helps increase social interaction and lower both heart rate and blood pressure. In one of her first sensory-friendly classes, Gonzalez had a mother who was moved to tears after witnessing her 11-year-old daughter doing breathwork. “She said her daughter never sat so still or was so calm,” recounts Gonzalez. “That’s when I knew that there were more people in the community who could benefit from the class.”

Gonzalez hopes the class will become more frequent, but most importantly, she hopes it influences anyone— whether they’re on or off the spectrum—to practice acceptance outside of the class and for children to feel like they belong in their own bodies. “The acceptance you learn and see on the mat, take it off the mat. Truly accept others for who they are,” adds Gonzalez.

As for her own son, Gonzalez admits one of the hardest things is to watch Kyle, 8, struggle with his peers. “Kyle is gifted, he is so smart. He just has trouble with his behaviors,” she says. “In class, he shines. He feels welcomed, he feels empowered.”

For more information on the class, visit LifeTimeFitness.com.