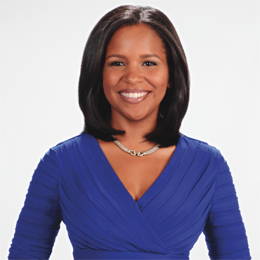 
by Nicole Pensiero
Broadcast journalists often become used to moving from city to cityâor from small market to larger market, to use the industry lingoâas their careers progress. Only a few, however, seem to ever end up back in their hometown. NBC10âs Erin Coleman is one of the lucky ones.

âItâs home and always will be,â says the affable 38-year-old news co-anchor, who spent 15 years honing her craft in various southern cities before return- ing to Philadelphia last fall. âWhen I hear someone talking about something in Bucks County or a business along Route 70, I know exactly what theyâre talking about. When I hear people talk about taking their kids sledding on Stokes Hill in Moorestown, thatâs where I went sledding as a kid. For the first time in my professional career, every- thing is familiar.â

And while she says âmany things have changedâ about the Delaware Valley since she set off for college back in 1996, much is the same.

âI have that history with this area,â said Coleman, who was born in Philadelphia and raised in Voorhees. âItâs amazing to go to the church where I got married or to run into people who knew me as a child and now see me on the news. Itâs really cool and it feels great.â

The only child of two health care professionalsâher mom is chief of fetal imaging at Childrenâs Hospital of Philadelphia and her dad is a Center City dentistâColeman herself never aspired to a career in health care. In fact, she wasnât sure what career path she would take, but she says that cur- rent affairs were an integral part of her family life; she recalls reading the daily newspaper, and watching both local and national news growing up, becoming quite familiar with various on-air personalities.

After graduating from Moorestown Friends School (which she attended from kindergarten through high school) Coleman attended Brown University in Rhode Island. A disc jockey at the college radio station, where she handled community news, Coleman laments the fact that she didnât pursue an internship at a local TV station, even though she was thinking about a career in TV journalism. âI canât tell you why I didnât, but when I talk to kids now, I always make that suggestion.â

Ultimately, though, it made no difference: her talent for writing and her confidence made her a standout. For a time, Coleman thought she might have a career in the music industry having interned at Sony Music for two summers in college.

But the lure of broadcast news was too strong and she decided to apply to journalism school after college: âI figured Iâd go for it; if I got accepted, then I was meant to be in journalism. If I didnât, Iâd figure it out from there.â But Coleman got accepted, completing her masterâs degree in journalism at Columbia University a year later, in 2001.

Her parents, she recalls, were âabsolutely supportiveâ of her career aspirations, which got off to a slow start after the 9/11 terrorist attacks took the focus off hiring new talent as TV stations around the country scrambled to cover the biggest story of the relatively new decade. It was humbling, Coleman recalls, living in her parentsâ basement, âsending out audition tapes with no one calling back, and seeing a lot of my friends landing their first real jobs.â

âI think I had been a little naive: I expected to get picked up quickly, even in a small marketâso it was a hard experience,â she recalls. But by December 2001, opportunity came calling: a CBS affiliate in the small city of Jonesboro, Arkansas, hired her as a reporter.

âI wasnât sure what to thinkâit was sort of a âno-wheres-villeâ place, but turns out, I did like it, and it ended up being a great learning experience,â Coleman says. Plus, she became friends with someone at the station who set her up on what she calls a âpseudo-blind dateâ with his best friend when they were both in New York City for a weekend. That led to a long-distance relationship with Cole- manâs now-husband, Cord.

From there, Coleman moved to a bigger market: Greensboro, North Carolina, where she spent three-plus years with a CBS affiliate. From there, a stint in another North Carolina cityâthe much bigger capital, Raleigh.

In 2009, Coleman moved on to the large metropolitan market of Atlanta, anchoring the weekly 4 p.m. news on WSB-TV, an ABC affiliate. By then, sheâd made peace with the idea of permanently living far from the area where sheâd grown up.

Then, the gig at NBC10 âfell into my lap,â as Coleman puts it, and she leapt at it.

While a move to Philadelphia was a career transition into the countryâs fourth largest broadcast market, âIt was home, too,â Coleman says. âSo it doesnât get any better than that.â Now co-anchoring the 5 p.m. news with Keith Jones, a role she filled in October 2016, Coleman says sheâs âbeyond thrilledâ to be back where she spent so many formative years.

And while she wonders what happened to all the traffic circles she remembered in South Jersey, Coleman says the area seems to have changed âin a good way.â

With a schedule that allows her to be home in time for dinner with her familyâwhich includes her toddler son and 6-month old baby daughterâColeman, is thrilled with her Philly gig.

âI like telling stories; I like connecting with viewers and connecting with the community,â she explains. âI love introducing that person who viewers may not have known about and, in turn, effecting change.â