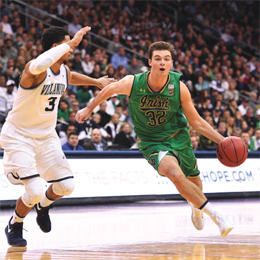 Steve Vasturia never even mentions the words “Final Four,” at least in the presence of his parents, Kathleen and John.

That is the pinnacle for any Division I college basketball player, and the Medford native would certainly love nothing more than to wrap up his standout career at Notre Dame with a trip to the Final Four on the first weekend of April.

But even after coming so close the last two years—Notre Dame reached the Elite Eight in 2015 and 2016 with a berth in the Final Four at stake—Vasturia isn’t the type to look too far ahead or celebrate the spoils before putting in the necessary work.

“No, no, no, no. We don’t talk about that,” Kathleen Vasturia says. “That’s not Steve. Of course John and I say to each other, ‘It would be great if he made the Final Four.’ I’m sure that would be a dream come true for Steve, but he takes it game by game.”

That approach has served Vasturia well since he entered the starting lineup as a freshman in South Bend. This season, the 6-foot-6 senior guard is averaging a career-high 14 points and almost four rebounds per game for the 21st-ranked team in the country.

Vasturia, a key player at both ends of the floor for the Fighting Irish, looks back fondly at his four years and finds it hard to believe his college career is drawing to a close.

“It’s crazy how fast it has gone,” he says. “We’re already in [March] and I feel like the season just started.

“It’s been everything and more that I was looking for. I’ve had a chance to learn from great people and make great relationships, and hopefully soon I’ll have a diploma from one of the best schools in the country. It turned out to be an unbelievable four years for me.”

Known as an outstanding defender and perimeter shooter, Vasturia first honed those skills growing up in Medford in an athletic family. His mother was a basketball player at Dickinson College, and his father played football and baseball at the University of Pennsylvania. Older brother Pat starred in basketball at Bishop Eustace and went on to play at Ursinus College, while younger brother Mike shined in baseball at St. Augustine and is now a freshman pitcher at the University of Maryland.

Steve was a typical kid who played baseball and soccer, took piano and guitar lessons and liked going to the movies. But basketball was always his first love, and plenty of afternoons and late nights were spent practicing on the family court with Pat and other older kids who were bigger and stronger.

“Every day after school, we’d play hoops all day outside,” Pat Vasturia says. “Whether it was shooting together or putting some pickup games together, Steve was always involved. It was fun for me, but I also think it helped him develop from a young age.

“His success has been well-deserved and he’s put in all the time necessary. None of that is luck—it’s hard work on his part.”

“Our neighbors are so great,” Kathleen adds with a laugh, “because Pat and Steve would be out there at all hours.”

For Steve, he couldn’t have asked for a better childhood than the one he had, and basketball was always a part of it.

“Being from Medford, we would go up on Friday nights to watch Shawnee play,” he says. “The teams that I remember had Matt McFadden, Julian Sanders and Eric Kessler. Eric Kessler’s dad was my coach in eighth grade travel basketball, so I’m very close to them and went to all those camps as a kid. A lot of my friends played for Shawnee and I spent a lot of time in that gym growing up.

“My parents still live there and it was a great childhood for me. Being so close to Philly, we went to Phillies, Eagles or Sixers games whenever we could. Some of my best friends are from Medford; I love going home and seeing family and people I grew up with.”

Vasturia didn’t head to Shawnee himself, or follow Pat to Bishop Eustace. Instead, he took his talents to St. Joseph’s Prep in Philadelphia, where he played for legendary coach Speedy Morris, scored a school- record 1,766 career points and was twice named MVP of the storied Catholic League.

His No. 32 jersey was retired, an honor that had never been bestowed upon a boys basketball player at St. Joe’s.

“I wanted to do my own thing,” Vasturia says. “A couple of my friends and guys I knew from my area were going to St. Joe’s Prep and I knew about Speedy Morris and the great program and great academics they had there. I think it was just the best fit. Me and my brothers all went to different high schools and had success and blazed our own trail.”

From St. Joe’s, Vasturia moved on to Notre Dame, where he’s had the chance to compete with the likes of North Carolina and Duke in the ACC. He made an impact right away in large part because of his ability to defend, and credits former team- mates and current NBA players Jerian Grant and Demetrius Jackson with bringing out his best in that regard.

“I wanted to be on the floor, and the way to do that was by doing anything I could to help the team,” he says. “For the first couple of years, I had a chance to really impact the game defensively. I took a lot of pride in that and I still do. ... I’ve always been taught since I was younger, by my parents, that defense is mostly heart and hustle. I take a lot of pride in that and I think I’ve been able to carve a nice role at the defensive end.”

Vasturia helped Notre Dame win the ACC Tournament as a sophomore, along with their exciting runs in the NCAA Tour- nament the last two seasons. Last year, he got to play in the Sweet 16 and Elite Eight at the Wells Fargo Center in Philly, and had lots of family and friends in attendance.

“I’ve lucked out as far as locations,” says Pat Vasturia, who now works for a health care consulting firm in New York City. “Last year they had the ACC Tournament in D.C., which I was able to get to because I have a lot of friends down there. The first round of the NCAA Tournament was in Brooklyn, so I was able to go to that. Then the Sweet 16 and Elite Eight were in Philly, so I went to that too.

“I’m going to be bummed when the four years are over because I’ve had so much fun watching all of his games. I’m super happy for him and excited for their last stretch run.”

This season, Vasturia’s mom has attended every game but one in person, often with her husband. That includes home games at Notre Dame, a flight to Miami and long car rides to Pittsburgh and Virginia Tech.

“It’s been terrific,” Kathleen says. “Senior year is senior year. This is pretty much it, so we sat down at the beginning of the season and decided we were going to do whatever we had to do to get to every game.”

Following Vasturia’s games could get a lot harder for his family next year. He hopes to pursue professional options, and if not the NBA, that could mean a career overseas.

“I definitely want to keep playing, no matter the situation,” Vasturia says. “A lot of people have had success overseas and if I have the opportunity to continue playing basketball and make some money, it sounds like a dream come true. I want to keep playing as long as I can.”

Before that day comes, there is one more round of March Madness for Vasturia to experience. Even if he won’t say “Final Four” out loud, moving on to Phoenix at the end of the tournament would be a storybook ending to his time at Notre Dame.

“We’ve had a lot of success the last two years getting to the Elite Eight,” he says. “To be so close and not get there motivates you even more. Taking the next step would be unbelievable for this group.”