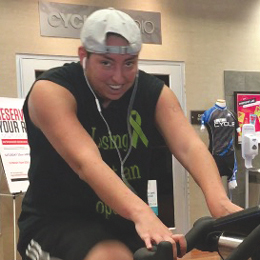 
by Kaytlyn Mroz
Eleven years ago, Kelly Deuchar was diagnosed with Myotonic Muscular Dystrophy; a progressive disease that keeps her in chronic pain, prevents her from developing muscle mass and will ultimately lead her to a life in a wheelchair. This past January, the 36-year-old Maple Shade resident did the unthinkable when she successfully competed in an indoor triathlon consisting of 10 minutes of swimming, 30 minutes of cycling and 20 minutes of running.

âA few people told me that I could not do it, so I wanted to prove to myself that I could,â says Deuchar who began training in April 2015.

âFor me, it was never about competing against the other triathletes; it was more about competing against myself and my disease,â says Deuchar. âI felt great after completing it and am happy to say, I broke my personal best in all three rounds. I am really proud of myself for taking on a challenge that some people felt would be impossible for me to complete.â