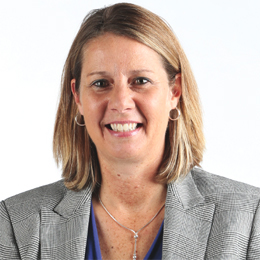 The 2016 WNBA Coach of the Year, a title that she has claimed now for the second time—the first being in 2011— Cheryl Reeve, came to Washington Township for her sophomore year of high school in 1981.

Remembering South Jersey for its rural atmosphere, Reeve says she most enjoyed the open space it had to offer where she could ride bikes and play tennis with her friends when she wasn’t consumed by other sports (softball and basketball), school work and her family.

After spending more than a decade coaching basketball at the collegiate level, Reeve became the head coach of the WNBA’s Minnesota Lynx at the end of 2009. To say that Reeve has brought the Lynx guidance through her coaching would be an understatement. Her passion for coaching the game helped lead the Lynx to three WNBA championships in 2011, 2013 and 2015.

The team continued to show dominance this year, returning to the Finals once again. However, the team fell to the Los Angeles Sparks in a series that ended in a controversial Game 5 that included officials failing to review a buzzer-beating shot that should not have counted. Naturally, Reeve was outraged and devastated during a postgame news conference that made national headlines.

We caught up with Reeve after the madness of the season died down to talk about how she got into coaching, her time in Rio during the Summer Games and how she plans to bounce back after a frustrating end to her last season.

Becoming a coach…
Upon completion of my four years of playing-eligibility at La Salle [University], I was offered an opportunity to be a graduate assistant coach for my alma mater. I didn’t necessarily dream of coaching—I completed an internship in my major, but realized basketball was a love of mine and that coaching the game was a great way to stay connected.

Experiencing Rio…
The Olympic experience was unforgettable. I was one of the rookies in the group in that it was my first Olympic experience. To be able to spend a month with the quality of people selected by USA Basketball on such a big stage is something I’ll always cherish. The Olympics are quite the production. I enjoyed not only watching basketball but had the opportunity to catch beach volleyball and track and field as well. It was really neat to see the camaraderie of all the USA Olympic athletes competing in Rio.

On taking a stand as a team…
This past summer, our team was impacted by the events surrounding the shootings of unarmed African- American men by police officers. First, there was the Baton Rouge (Seimone Augustus’ hometown) shooting of Alton Sterling, then shortly after, in our own backyard in Falcon Heights, Minnesota, the shooting of Philando Castile. Then shortly after that, the ambush of the Dallas police officers. These events sparked conversation about wanting to do something to shine the light on a societal problem very close to our players. We decided the best way to use our voices was to don warm-up shirts that were an expression of many things. The front of the shirt read “CHANGE starts with US” with the words “Justice and Accountability” below it. The back of the shirts listed the victims of the shootings: Philando Castile, Alton Sterling and the Dallas Police Department shield. “Black Lives Matter” appeared below the names. The shirts sparked great conversation, locally and nationally, around how to bridge the gap between police officers and the communities they serve.

Handling a devastating loss…
The loss in Game 5 of the WNBA Finals is the single most gut-wrenching experience I’ve ever felt in sports. We were all simply devastated—players, coaches, the owner, the organization and fans. It is a feeling that unfortunately will last forever.

WNBA’s Coach of the Year…
I feel very fortunate to have the opportunity to be coaching the Minnesota Lynx at such a special time in our franchise’s history. We’ve assembled a great group of players who are even better people and have made coaching in the WNBA awfully special. I attribute the success to these great players as well as the coaching mentors I’ve been fortunate to learn from along my basketball journey.

Coming soon…
Next for the Lynx is to look forward to the 2017 season. We will spend the coming months formulating the roster through free agency and the collegiate draft to try to assemble a group equipped to compete for another WNBA Championship.