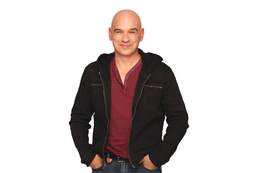 The cameras have just shut off and the lights have been turned down, yet Michael Symon is still very much on. Having just wrapped the day’s filming of The Chew, ABC’s food-centric daily lifestyle show which he co-hosts with the likes of Mario Batali among others, Symon remains engaged and personable with plenty of his infectious laughter to go around.

Thanks to his personality that lends itself to being in front of the camera, Symon is a fixture on television sets these days, popping up everywhere from The Chew to Food Network. But don’t think for a second that his jovial sensibilities surpass the reverence he shows for food. He is both an Iron Chef and a James Beard Award winner and operates several restaurants in his native Cleveland, as well as Detroit, Washington, D.C. and all the way down to a burger joint in Austin, Texas. His next venture will bring him to Atlantic City, specifically the Borgata where this spring he will open up his first Italian restaurant, Angeline. Symon’s arrival puts him smack in the middle of the Borgata’s impressive lineup of notable chefs, including Bobby Flay, Wolfgang Puck, Geoffrey Zakarian and Michael Schulson.

While this is Symon’s first Italian venture, he isn’t foreign to the cuisine. Sure, he’s known for concise fine dining plates as much as he is for stellar burgers and mouthwatering barbecue, but growing up with Sicilian influences from his mother’s side of the family, Symon is eager to showcase “the food [he] grew up eating.”

We spoke to him about the new restaurant, his career and found out how his friendly rivalry with Bobby Flay extends further than the kitchen.

Q&A
SOUTH JERSEY MAGAZINE: So you are opening this new space at the Borgata, and it will be your first-ever Italian restaurant. What made you decide to go in that direction?
MICHAEL SYMON: My mother’s Sicilian so all my early years in the restaurant business I was always shuffling around Italian restaurants. This is a throwback restaurant to what I grew up with. I named the restaurant after my mom.

SJM: With 223 seats in the restaurant, how do you have to alter your approach when you are doing that many covers a night?
MS: With a bigger kitchen (laughs). We always say, “How are we going to come out with the best food we can do?” And then go backwards from there. We never limit our approach to what we want to do and we have gotten smarter over the years.

SJM: You briefly hosted Dinner Impossible and did an episode on the Wildwood boardwalk, what do you recall about that? ?
MS: I remember when we did chocolate covered bacon before that was a hot thing. People were looking at me like, “What you are doing?” But now it’s in every candy store. And we did the big clam bake, it was great. That show took years off my life but it was fun.

SJM: How so??
MS: On Iron Chef you cook really high-end food for six people, which is always fun. But on Dinner Impossible we need to make food for 2,000 people. The way I approach cooking, I never buy anything that is presliced, precut, etc. And now we need 600 pounds of carrots. But it was great. I filled in for Robert [Irvine] for a while.

SJM: Did you get to venture out to any of the other Shore towns when you were in the area?
MS: No. Whenever I do television, I tell people, look I am a chef and a restaurateur first, so we need to make this work around that. I fly in, do the show, fly out and get back to the restaurants. That’s how I keep my sanity.?

SJM: Some would say the restaurant business is a little chaotic, but you are saying it keeps you sane. Does that mean you are a little twisted?
MS: For sure.

SJM: When you have as hectic of a schedule as you have with so many different ventures in different areas, how much time are you able to actually spend in your kitchens and is that still important? ?
MS: I’m in the kitchens all the time. I need to be in them, it’s in my blood. Last week was a great example: We get done filming [The Chew ] at 2 [p.m.] on Thursday. I was on a plane and I’m in Cleveland by 4:30 and worked Thursday, Friday, Saturday, Sunday and Monday morning came back to New York to do the show.

SJM: Are you sick of the term celebrity chef??
MS: Yeah, it’s an interesting and great time to be a chef. But how can I say this ... not even sure being PC is the right term...

SJM: Well, you seem very comfortable in front of the camera, how much do you enjoy doing the TV work??
MS: I enjoy it, my favorite part about being a chef is teaching young cooks. So, my favorite thing about being on TV is having the ability to be in 3 million people’s kitchen every day and show why food is important to us. It’s relatively simple to get a home cooked meal on your table to feed your family.

SJM: How does being from Cleveland help shape the way you are as a chef? ?
MS: It grounds me a lot, even though I have a lot of fine dining restaurants, I don’t think of my food as fussy. There’s a lot of food out there that is fussy these days. We use high-end ingredients, handle them with care, but we just let them speak for themselves, we don’t mess with them too much. I hope when people take a bite of certain dishes it takes them to a place—their childhood or a vacation and gives them a taste sensation.

SJM: You are a chef, a TV personality, author, etc. What do you do to unwind from it all??
MS: Well it won’t sound like decompress- ing, but my son just opened up a little gourmet doughnut and coffee shop. So my wife Liz and I worked with him in the doughnut shop all summer. It was incredibly fun and a stress reliever to watch your kid get started in the business and have success.

When I’m home I garden a lot; I love putzing around in the yard. And I adore golf, I’ve been playing since I was 8 years old.

SJM: Playing golf would stress me out even more.?
MS: Well then you’re not good enough (laughs). It’s not stressful for me because I’m always taking money from Bobby Flay (laughs).

SJM: Getting back to the Borgata, you have a relationship with many of the other chefs in that building from Bobby Flay to Wolfgang Puck to Geoffrey Zakarian. What’s it like to all be in the same place, is there a friendly competition at all? ?
MS: I wouldn’t even say it’s a competition. I think of all of us as mature chefs, men, restaurateurs; it’s great to be able to work with your friends.

SJM: The culinary world has evolved so much in the past 10-15 years, where would you like to see it go in the next decade?
MS: The direction food has taken has such a positive twist. I hope it continues and consumers continue to demand from restaurants and chefs to know where food comes from and how it is raised and how it’s produced. I think that is an important part of our future.

SJM: So you have the Borgata spot coming soon, any other new things you’re working on you can share with us??
MS: Nothing crazy right now, working on the Borgata, that’s our next big thing. After that one of our Cleveland restaurants [Lolita ] had a fire, so we are bringing that back to life. It was our first location 20 years ago, so now that we’ve gotten over the emotional aspect, it’s time to bring it back.