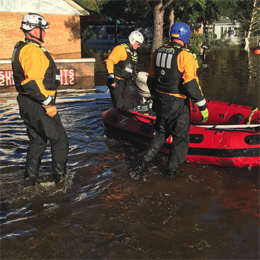 At a Momentâs Notice


by Liz Hunter
Last month, as Hurricane Matthew approached the U.S., killing more than 1,000 people in Haiti alone, states along the East Coast prepared for the worst: Governors declared states of emergency in Florida and North Carolina, evacuations were ordered and even Disney World closed its doors for just the fourth time in the parkâs history.

In the midst of the chaos, 80 people from New Jersey were heading straight into the thick of it. On Oct. 6, these members of New Jersey Task Force One (NJ-TF1), the stateâs Urban Search & Rescue Team, were deployed to assist in rescue operations related to Hurricane Matthew, officially ending up in North Carolina, where flooding was overwhelming parts of the state. The teamâs flood/swift water rescue training made them invaluable asset, and some of South Jerseyâs own were there helping fellow Americans to safety.

Moorestown resident David Chezem was among them. âWe searched about 1,000 homes. One rescue that sticks with me is the double amputee we rescued down there [in North Carolina],â says Chezem. âThere was nowhere he could go as the water rose up. Iâm also an animal person and we found animals that had been left alone, some tied up or in crates. ... Those are the images that stick in your mind.â

NJ-TF1 was there for six days and helped in over 100 rescues, including children and pets, in the Fayetteville and Lumberton areas of the state. It was significant not only for those who were helped, but for the team itself as this was its first deployment as a FEMA team.

According to Lt. Christopher DeMaise, unit head for NJ-TF1, there are only 28 FEMA Congressional-designated Urban Search & Rescue teams, including NJ-TF1. âWith the withdrawal of one team, [we] were unanimously selected to replace that team,â he says. âBeginning in the fall of 2015, NJ-TF1 was subjected to an Administrative Readiness Evaluation and numerous other administrative obligations. On Oct. 3 NJ-TF1 was designated âfully mission capableâ and was issued an activation order on Oct. 6, which required us to depart within six hours [for Hurricane Matthew].â

Established in 1996, the task force is comprised of technical search and rescue specialists from the public and private sectors. The more than 210 members of NJ-TF1 have expertise in disciplines including structural collapse, K9 and technical search, structural engineering, heavy rigging, logistics, medical triage and treatment, and flood rescue, among others.

While the FEMA designation opens up the opportunity for federal funding for training and equipment, NJ-TF1 has long been among the responders for emergencies and disasters in New Jersey and elsewhere in the U.S., including the 9/11 World Trade Center attacks, the 2003 Tropicana Casino parking garage collapse, Hurricane Katrina and various operational deployments for events such as the 2000 Republican National Convention and the 2014 Super Bowl. For Hurricane Sandy alone, the team conducted over 1,000 rescues, checked 16,000 houses and amounted more than 5,000 volunteer hours in their six day deployment.

Training is a huge component of NJ- TF1. Based out of the Joint Base in Lake- hurst, team members all undergo a weeklong structural collapse course when they are first accepted, no matter which specialty theyâve signed up for. Specialties then go through courses separately. For instance, some of Chezemâs training as a search specialist includes tools like cameras and listening devices, as well as working closely with K9s.

Barrington resident Sarah Atlas is in the K9 unit with NJ-TF1. She says training a dog for this type of work takes commitment and dedication. âIt takes constant training to make the dog the best they can be and it can take two to three years before a dog passes all of the training,â she says. âThey have to be able to focus on the task, ignoring all outside stimulus, and they have to learn to go up and down ladders, which you can imagine doesnât come naturally to them. They become like family. I love them, but they have a job to do, so there needs to be respect in the relationship.â

Joe Schmidt is a career firefighter and captain of the Washington Township Fire Department. He joined NJ-TF1 in 2009 and is a technical search specialist. âI began as a volunteer in fire rescue in 1992 and as I got older I just gravitated toward the technical rescue aspect and as I got more training and knowledge in this area, NJ-TF1 seemed like the logical step,â Schmidt says.

Schmidt works in conjunction with the K9 unit. âThe dogs go out ahead of us and use their scent ability to determine if there is a victim in the area, then we come in with cameras and listening devices to pinpoint a location, which we then pass along to a rescue specialist,â he says.

Thatâs where someone like Mark Jenkins of Deptford comes in. A Mount Laurel firefighter, Jenkins is a rescue specialist for the task force, which he joined in 2012. âWeâre sort of the infantry. Weâre on the ground, shoring up buildings, digging trenches, digging through rubble,â he says. âWeâre the guys that get down and dirty and make the situation safer to affect possible rescues.â

Perhaps one of the most humbling aspects of this group of men and women is that they are volunteers, many of them with other careers, bosses, families who must be ready to accept their absence at a momentâs notice.

âHaving a family makes it difficult to be ready to go within hours,â says Jenkins. âIt affects the people youâre leaving behind. Those are the types of things to keep in consideration.â

Chezem is a volunteer firefighter in Moorestown but his day job is VP of human resources for PHH Mortgage. One might expect a boss to be less forgiving about missing work for days at a time, but thatâs not the case.

âWhen I was hired I made it clear I was a member of NJ-TF1 and could be deployed at any moment,â says Chezem. âIâm fortunate to have an employer who values giving back to the community and understands this.â

Atlas adds that her employer Western Pest Services has also been extremely accommodating in the event of a deployment.

The members of NJ-TF1 are on the front lines, but seek out no praise or recognition for the physically, emotionally and mentally draining work they do.

Jenkins says, âFor me, thereâs some- thing in me. Itâs my passion. I enjoy the challenge of it, and being around other people with the same interest and dedication. You might say itâs my calling.â

When Atlas joined 16 years ago, her first deployment was 9/11. âIt was overwhelming, frightening. It started as a rescue mission but it became evident there wasnât going to be much of a rescue, and it turned into recovery,â Atlas says. âI saw the most compassion in people through the worst times. It was a changing moment in my life, the fact of the enormity of what was in front of us when we showed up. Itâs at that moment when your training kicks in. You set your emotions aside so you can do the job.â

She could have easily thrown in the towel after that experience, but she forged on and at age 60 says she has no plan on stopping.

âI think most of us are adrenaline junkies,â Atlas says. âWeâre all dedicated people from different walks of lifeâcivilians, firefighters, police, medicalâand we are brought together to provide emergency assistance. It can be stressful, physically and mentally tiring, but we do it because itâs a part of who we are. [Sept. 11] personally impacted me. I realized how patriotic I am, and saw the compassion, which was some- thing good out of the evil. It makes me proud to be part of this team.â

And New Jersey is proud of them. âWe started small in the mid-â90s, and now weâre recognized as a FEMA team,â says Schmidt. âTo come from those humble beginnings to where we are now, thatâs something for the state to be proud of.â