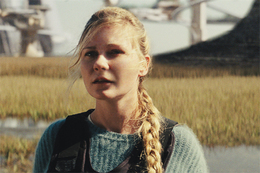 
by Debra Wallace
Although sheâs often seen in a gorgeous gown sashaying down the red carpet to spread the word of her latest indie or blockbuster film, Kirsten Dunst is just as comfortable âplaying the roleâ of girl next door, who in kinder weather dons a T-shirt and shorts for walks on the soft, sandy beaches of her hometown, Point Pleasant.

âI often feel like I have two different lives,â confesses the blond-haired, blue-eyed Dunst. âI donât think of myself as the girl on the magazine covers; Iâm just a girl that does average things with my friends in my free time.â Now 34, Dunst was born in the spring of 1982 to Klaus, a German-born executive in the medical-services business, and Inez, the owner of an art gallery who later became her business manager.

She made her feature film debut in a segment of Woody Allenâs 1989 film New York Stories. Shortly thereafter she, along with her mom and brother, moved to Los Angeles, where her film career took off. Yet the Jersey Shore has always remained close to her heart. She has vivid, happy memories of living there and returning for frequent extended vacations.

âI am so lucky that I grew up on the seashore of Point Pleasant,â Dunst reminisces. âThe simple things made it specialâjust the air and the way it smells. It was just wonderful putting my toes in the sand and feeling the ocean breeze. I know that a lot of truly wonderful people come from Jersey.â

Despite her award-winning film and TV successes, Dunstâs demeanor remains the same as ever.

When she was a teenager, in a leading role in the 1999 Holocaust TV movie, The Devilâs Arithmetic (produced by Dustin Hoffman), her mom answered the phone first, and then introduced her daughter, Kirsten, who was polite and articulate.

Turning the clock ahead 15 years to talk about her latest film, Midnight Special, Dunst remains level headed and well mannered, while taking on increasingly challenging roles, both on and off camera. Sometimes, with the intrusive lenses of the paparazzi, the spotlight does not feel as glamorous as a would-be star might have imagined, but Dunst doesnât let the pressure get to her.

âAfter all, Iâm an actress; Iâm not running a country,â she says. âThere are always people who will have opinions about me, good or bad, but I canât let [that] affect the way I live my life.â

From Jersey Girl to Cover Girl
Dunstâs career began at the tender age of 3, when she did the first of more than 100 commercials. She has since gone on to appear in dozens of memorable movies, in many genres, including romantic comedies, action films and intense dramasâeven a musical or two.

In 1994, she made a breakthrough performance in Interview with the Vampire, alongside leading men Brad Pitt and Tom Cruise.

She made her mark working with her favorite director, Oscar winner Sofia Coppola, whose 1999 indie film, The Virgin Suicides, was a major career turning point. Dunst is also known for portraying Mary Jane Watson, Peter Parkerâs girlfriend, in a trilogy of Spider-Man films.

Previously, she proved her status as a diverse leading actress from comedy hits such as Bring It On, to more poignant roles, including those in Marie Antoinette, Melancholia and Eternal Sunshine of the Spotless Mind.

She also had a leading role in the TV hit Fargo, which she proudly called âone of the best roles of my career. Itâs a little bittersweet for me that itâs over.â

Many film and television performers who start out in show business at a young age tend to decline rapidly as they get olderâbut not this down-to-earth actress, who says that she keeps everything in perspective: âMy happiness isnât measured by my success; itâs about love, family and when Iâm not working, sitting on the beach, chilling out with friends.â

While Dunst says she enjoys curling up on the sofa with a cup of hot tea while watching her favorite romantic comedy, Annie Hall, she no longer enjoys performing in that genre. âItâs funny; I donât love doing them, but I do enjoy watching them,â she says.

Comedy, however, especially the girl-buddy variety, is definitely appealing to her. She says she âloved the atmosphere on the setâ of 2012âs Bachelorette, a film in which she co-starred with Lizzy Caplan (Masters of Sex), Isla Fisher (Wedding Crashers) and Rebel Wilson (Pitch Perfect).

âOverall,â she says, âI donât think there are enough good female comedies, and I love working with women, which you donât get to do very often. I enjoyed the dynamic of not having to play the love interest. I enjoyed being able to change it up.â

In the near future she plans to star in a remake of the 1971 Clint Eastwood drama, The Beguiled, to be helmed by Coppola. The film, which is set in the Civil War era, will star Elle Fanning as a student at a girlsâ boarding school, as well as Nicole Kidman, who will play the schoolâs head mistress, and Dunst, who will portray one of the instructors.

Her most recent movie was the science-fiction film Midnight Special, which took Dunst out of her comfort zone. In the film, Dunst plays Sarah, the beleaguered mother of an 8-year-old boy who has supernatural abilities. The character she plays has fled a religious cult on a ranch and gives up everything she has for her young sonâs happiness. The film, which takes viewers on a perilous journey from Texas to Florida, also stars Michael Shannon and Joel Edgerton, as well as Jaeden Lieberher (St. Vincent) as her young son, Alton. Dunst says the movie reminded her of two of her favorites: Close Encounters of the Third Kind and E.T. the Extra-Terrestrial.

Jeff Nichols, the writer/director of Midnight Special, says Dunst embodied exactly what he envisioned for Sarah when he wrote the screenplay: âKirsten is very good at getting into the emotion of a scene. It can be a risky narrative move to begin with a relationship between a father and a child, and then, midway through, shift to the mother and the child. You need to understand what theyâre going through, and you can see all of that on her face.â

Still Stretching
As she continues to âstretchâ herself by embracing new and challenging roles, Dunst says she would love to explore the thriller or horror genre with a film that does not have an obvious story line, such as Rosemaryâs Baby or Donât Look Nowâtwo other movies she admires.

Dunst also sees directing in her future. She has already directed two short films, and is looking for just the right project to jell. âI believe it will happen this year or next year. It is too early to give any specifics, but I am so terrified and so excited at the same time, which tells me I have to move forward with it.â

While on location in Athens, Greece, she found a few unusual ways to chill out.

âWhen Iâm doing something very emotional I like to take time for myself with my headphones on, listening to all types of music,â she says. âAnother luxury was taking a cab to the beach at the end of the dayâthis was one movie where it felt like I could be on vacation.â

She also showed her tender heart for animals while filming in Greece. âBetween scenes and setups I was feeding stray cats,â Dunst recalls. âThere are so many stray cats in Greece, and they are everywhere. So the producer, Robyn Slovo, and I would get all the craft-services food we could carry and go out and feed the cats. I fed a lot of cats.â

When she is not working, Dunst says she has a few guilty pleasures. She enjoys several TV series, including The Bachelorââso funny and ridiculous that itâs brilliant,â as she describes itâand the home-improvement cable channel HGTV, because she thoroughly enjoys using her creative side for home decorating.

When it comes to human frailties, Dunst recognizes her own. So what is her biggest weakness? âTaking care of others first and putting myself second; I am definitely working on that one.â

She also has advice for those who want to pursue entertainment or any other endeavor: âTrust yourself. You have gut instincts that tell you if something is right for you, so donât ignore them.â

And Dunst still keeps in touch with several of her friends from Point Pleasant.

âOne girlfriend, who was my best friend while we were growing up, still lives there,â she says. âWe no longer see one another often, but to catch up we email all the time and call when we can. Whatâs important is that both of us will always be Jersey girls at heart.â