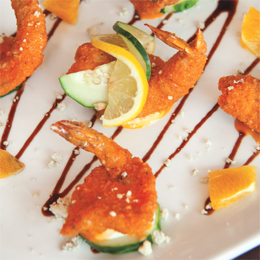 Manninoâs Cucina Italiana
Pitman
Jumbo shrimp are breaded and fried, then coated in a house-made Buffalo sauce and served with blue cheese and imported Gorgonzola. The crispy breading and slightly spicy Buffalo sauce shine next to mild but juicy shrimp, and the upscale take on blue cheese dressing raises these familiar flavors to the next level.

DATES TO WATCH: National Cream Filled Doughnut Day
There is no shortage of fabulous and gourmet doughnuts these days, but the unique and quirky flavors you find pale in comparison to the classic cream filled. Need proof? Take a bite of these.

THE TOP FIVE: Oktoberfest Foods
The name may confuse English speakers, but the annual German Oktoberfest comes in the middle of every September and you donât have to board a plane to enjoy the beers, bites and fun that come with it. Check out these authentic plates and pints that will have you saying âProst!â

1.) JagerSchnitzel Hoagie
Tradition gets a dose of local flair, taking a crispy, fried wienerschnitzelâthatâs a thin veal cutlet to youâand propping it on a long hoagie roll. The sandwich gets smothered in rich mushroom gravy and finished with lettuce, tomato and onion.
Best of the Wurst, Riverside, BOTWNJ.com

2.) Flying Fish Oktoberfish
This bottle is considered a festbier, a specific style brewed just for the Oktoberfest season. It uses all German malts to create a reddish color that balances both hops and malts in each sip.
Flying Fish Brewing Co., Somerdale, FlyingFish.com <> 3.) Kartoffelpuffer
As fun to say as they are to eat, these deep fried potato pancakes are as traditional as it gets. Sebastianâs starts guests with a plain version, then gives the choice of topping them with onions, spices, apple sauce or sour cream.
Sebastianâs Schnitzelhaus, Wrightstown, EnjoySebastians.com

4.) Pretzel Burger
A German pretzel gets rounded out into bun form and filled with a massive beef burger, sherry onions, bacon, cheddar and a spicy aioli.
The Pour House, Westmont, PJsPourHouse.com

CLOSURES
CafÃ© BellaVita in Merchantville closed its doors at the end of July. The family-owned Italian eatery cited an increase in sales costs and decrease in business as the cause.

Iconic Cherry Hill eatery Short Hills Deli has temporarily closed its doors after a two-alarm fire caused severe damage to the interior and exterior. The ownership hopes to reopen by December.

Cherry Hill French restaurant Dream Cuisine CafÃ© has closed. The website has listed the Cherry Hill location as shuttered, but states that chef Vincent Fanari is working on a new venture.

Marinoâs of Mullica Hill has closed temporarily starting on Aug. 20 to undergo major renovations, which will include doubling the dining space. The eatery will reopen on Sept. 20.

Chef Mark Berenato has closed his original location, Da Soli in Haddonfield. Berenato will instead focus his attention fully on his Marlton eatery, Allora.

Le CafÃ© CrÃªperie in Marlton has shuttered its doors. The crepe restaurant was previously located in Cherry Hill before moving in July 2014.

The owners of Manninoâs Cucina Italiana in Pitman have opened a second location in town. Pizzeria Manninoâs serves wood-fired and brick-oven pizzas just down the block from the other Broadway location.

Organic grocery store Momâs Market has opened in Cherry Hill on Kings Highway across from the Ellisburg Shopping Center, where Whole Foods is located.

The Oaklyn Manor has reopened for the long haul. The restaurant closed at the start of 2016 following ownership disputes, but reopened in August under a new team of owners with a fresh, modern menu.

Arctic Freeze Creamery is coming to Collingswood. The shop specializes in\ Thai rolled ice cream, which prepares flavors and toppings on an ice cold surface before rolling it into thin swirls.

Gloucester County will soon be home to new breweries. Blue Anchor Brewing will open on Williamstownâs Main Street and has just settled on the location, while construction and brewing is currently underway at Eight & Sand Beer Co. with plans to open at the end of the summer in Woodbury. Human Village Brewery will open its doors in Pitman and Death of the Fox is slated to make its debut in East Greenwich.

Downtown Haddonfield is rolling out their first-ever Haddonfield Night Market on Sept. 8. The 5-8 p.m. event will feature food trucks up and down Kings Highway, including Brazilian, Chinese and Italian cuisines.