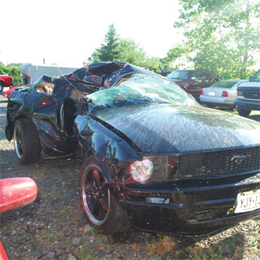 
by Kaytlyn Mroz
Eight days before your high school graduation is proven to be a crazy time in a young adultâs life. Tests and papers have finally come to a close, plans to head to college or into a new career path are around the corner and you are trying to correlate how to juggle attending all of your friendsâ graduation partiesâall while getting ready to walk across that stage to get your diploma. Whether you know it or not, your life is changing.

Mid-afternoon on June 11, 2012, Wittman was travelling from her home in Moorestown down I-295 South toward her fatherâs house in Marlton when she was struck by another vehicle that was changing lanes. Upon contact, Wittman lost control and veered off the highway and struck a tree.

âMy injuries were so bad I donât remember anything the first year,â says Wittman. âThey said that I would be totally disabled and said I wouldnât be able to walk, talk, feed or take care of myself.â

âHer scans and exam indicated extensive brain damage. Predicting the degree of neurologic recovery in a potentially salvageable patient is difficult,â says Wittmanâs doctor, Dr. Alan Turtz, Professor and Chairman, Department of Neurosurgery at Cooper University Hospital. âAt the time, we believed there was a realistic chance that she would never wake up, but we werenât sure, which is why she was treated aggressively.â

Chrystal Warrington, Wittmanâs mother, says even though her injuries were immense, and the prognosis glum, Wittmanâs survival was improving by the care of the doctors and the prayers from everyone who knew her. After spending significant time at Cooper Trauma, months at Moss Rehabilitation and then sequential months at Magee Rehabilitation Hospital, Wittman returned home in December of 2012.

Dr. Brian T. Kucer, medical director of the Brain Injury Program at Magee Rehabilitation Hospital, says Wittman was only following commands about 50 percent of the time when he met her. Recalling that she was in the early stages of her recovery even though it had been a few months after her accident, Wittman couldnât stand or walk and had difficulty speaking and swallowing.

âHer bright personality always shone through ... even in that difficult time,â says Kucer.

The extent of Wittmanâs injuries left her wheelchair bound with a tracheotomy, paralyzed on the right side, having vision deficiencies and many other systemic problems.

While Wittman was not in the best condition and her surgeries were extensive and mostly involved her brain, Warrington says their familyâs faith gave them continued hope for her future. âOne of the most memorable milestones in her recovery for me was when she spoke for the first time,â says Wittmanâs older brother Joe. âThe summer of the accident I was at the hospital every day until I had to start my junior year of college, during which time I visited every weekend. Each time I visited I hoped to see some kind of responsiveness; any type of evidence that Brianna was still with us.â

Joe remembers walking across his college campus and getting a call from his mother asking if he would like to hear his sister speak. âEven though I had been by her side in the hospital for months, that moment over the phone was the closest I had felt to her since the accident,â says Joe.

After going through intensive inpatient rehabilitation, Wittman then continued with outpatient rehab and after putting in hundreds of hours of work, she was able to rid herself of leg braces that she had previously used with a walker.

âFeb. 8, 2014 we celebrated me [being able to walk] without any assistance from anyone or any braces,â says Wittman.

On May 20, 2016, almost four years since Wittmanâs accident, she ran for the first time. âI was very excited to reach my goal even though doctors were unsure I would walk again let alone run again,â says Wittman.

âI hate saying this, but sometimes I forget how far sheâs come because I see this amazing young woman come into the gym three days a week and work her butt off,â says Wittmanâs trainer at Virtua Center for HealthFitness Moorestown, Jared Coughlin.

With the unconditional love and never- ending support from her unwavering mother, Wittmanâs next step is taking a reading class at Rowan College of Burlington County. After recovering from such a traumatic accident and extensive brain damage, Wittman has a new goal in mind: âI would like to experience college life someday,â says Wittman, â... and live in a dorm.â