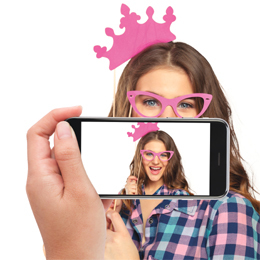 
by Liz Hunter
âWait, are you going to post this?â

How many times did you hear these words from your kids this summer? Whether down the Shore, hanging by the pool or just goofing around in the backyard, the second you pull out your phone to capture a moment or memory, kids immediately want to know who is going to see it. Itâs a bit of a buzz kill for parents who want to share their pride and joy with family and friends online and teens who donât want their lives or imperfections shared with others.

Itâs the newest thin line in the digital age where information is so easily shared and nothing is sacred. A scroll through your Facebook news- feed tells you whose kid just lost a tooth, scored the winning goal or went potty for the first time. Children in this generationâwhich some have dubbed Generation Zâhave never known a world without smartphones and anyone 12 years old and younger has never known a world without Facebook. Itâs a far cry from how older generations grew up, when pictures were printed, stored in a box on the top shelf of the closet and rarely seen by the masses.

So, the question is: Do parents have the right to share information about their children on social media? If you ask lawmakers in France, the answer is more of a warning: Post at your own risk. Under the countryâs strict privacy laws, children could sue parents for breaching their privacy rights without their consent and penal- ties could be as high as Ã 45,000 (roughly $50,000) and one year in prison. The rules stem from warnings about pedophiles targeting children, and French law enforcement agencies have urged parents to set up privacy controls.

In the States, thereâs nothing formally stopping parents from posting about their childrenâyet. Natalie Simmons, a mom of three from Sicklerville, loves sharing her childrenâs achievements on social media, including Facebook, Twitter and Instagram. âThroughout the year I like to post their achievements. My one son just graduated from high school and won some awards and was in honor society, so I posted that with the hashtag âproudmom,ââ she says. âI have family and friends on Face- book who want to know whatâs going on with the kids.â

Lately, however, she admits her kids have been rolling their eyes a little more with each post. âWeâll be out somewhere and Iâll want to post a pic[ture] of where we are and theyâll ask what Iâm going to do with it. They are embarrassed by all of it. They donât feel like itâs anyoneâs business whatâs going on with them,â Simmons says.

Despite their requests, Simmons usually posts the pictures anyway, like the one she posted of her 16-year-old son, Justin, wearing a birthday crownâcrafted by his younger sisterâwith a clearly un-amused expression. âHe was embarrassed but it was funny to me,â she says.

Justin says this sort of experience is not exclusive to him. âMy friends also deal with it,â he says. âAt first I really didnât care but then it became annoying. I think parents should ask permission before posting things publicly.â

Simmons says she can see where her sonâand other kidsâare coming from. âI would probably have wanted to know what my mom was posting if this was around when I was little,â she says. âI can kind of get it, but itâs just fun and Iâm keeping everybody up on what they are doing.â

While there are some kids rebelling against the social media limelight, there are also those who love having their pictures posted. Like Cherry Hillâs Angelo and Adrianna Grippi, ages 11 and 7. Their mom Nicole Doerr-Grippi says their family is scattered around New Jersey, New York, North Carolina and even in-laws in Italy, so Facebook keeps them connected.

âAngelo is a ham and is always telling me to take his picture, and Adrianna will put together outfits for school and pose so we can share it on her step-sisterâs fashion Instagram account,â says Doerr-Grippi. âMy kids like it because when they talk to their nonna or their cousins on the phone, theyâll tell them about the pictures they saw, or say, âHey, Angelo we saw you won your baseball game.â Itâs how our family is watching them grow up.â

She says Angelo recently got his own Instagram accountâwhich she monitors and has the password forâand there have been a few instances when heâs wanted to approve a photo before itâs posted. âIf itâs some family stuff he will say âdonât tag me,â because he doesnât want anything to make him seem not cool,â Doerr-Grippi says.

While this is all in good fun right now, some suggest this digital record of childrenâs lives could not only haunt them as adults, but may also present security risks.

Jim Brown, assistant professor of English and director of the Digital Studies Center at Rutgers University-Camden, has researched how people use technology to interact. âWhen you think of the communication we do in these spaces it raises a new set of problems,â he says. âWe share things about children in fairly public spaces. Thereâs a difference between having a photo album on the coffee table versus having an online archive of everything that will be there forever. You may not choose to be in that photo album, but it has a constrained audience.

âThe more data you share, the more youâre putting the child out there to be found and tracked.â

Brown offers their future job search as a consideration. âWe know employers are doing searches on job applicants, and these searches can turn up an archive of material not just of things the individual shared them- selves, but what others shared about them,â he says. âI donât know that weâre thinking carefully about the long-term effects of sharing on other people and this data that is accessible forever.â

Privacy settings also offer no guarantee. âIn terms of safety or control I would never consider those options to be all that stable. Social media networks change their privacy settings often and these networks are not committed to finding help for users to protect this data,â says Brown. âWe need to think carefully about the choices weâre making for young people, our kids. Right now we donât have that control on a place like Facebook.â

Parents are not the sole offenders, either. âGrandparents, baby boomers, are dying to share things,â says Brown. âSo do grandparents now need to ask their own children for permission to post? Who is the central funnel for making this decision whether or not to publicize a photo or video?â

While Facebook might be the most convenient way to share, Brown says the more secure way would be a personal website. âYou donât need to know too much about Web design to put up your own site with password access and invite only the people you want to see these things,â he says. âItâs more akin to a photo album and you have control over the data.â

From a researcherâs perspective, Brown says it will be interesting to see how this generation reacts as they mature. âThereâs little evidence that young people are worried about this. No one thinks twice about their information being out there, but it will be interesting to see if there is back- lash from a generation that wants the control back. It will open up a new cultural conversation and new business potential for social networks that will give people more options to have more control.â