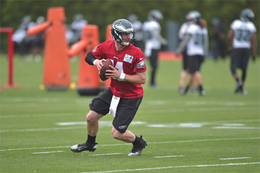 
by Rob Maaddi
âI just want to get better every day,â Wentz says. âMy biggest thing is that youâre never a finished product, physically, mentally, any of that. So thereâs a lot to learn. You can never watch enough tape, you can never study enough, and I just want to come out every day and learn a little bit more and get a little bit better.â

Before the draft, scouts raved about Wentzâs sizeâheâs 6-foot-5 and 237 poundsâand they love his arm strength, but many questioned his inexperience. Wentz started only 22 games at a Division I Football Championship Subdivision school. He led North Dakota State to the FCS national championship both years, but didnât face powerhouse competition.

âHe was just an incredibly impressive guy,â Roseman says. â[He has a] presence when he walks in the room, when he talks to you not only about football but about life, and then when you watch him interact with people, [you can see] the impressions people have.â

Pedersonâs eyes light up when he talks about Wentz. The first-year head coach spent most of his 10 seasons as a backup so he wasnât blessed with similar skills. He considers Wentz a rare talent, a player who can lead the team back to contention and win a Super Bowl.

âYou just love everything about this kid,â Pederson says. âHis energy, his work ethic, itâs just little things now, detailed things in his footwork, his drop, the progressions and where his eyes are.

Those are the things in the National Football League from a quarterback standpoint that really become very important on a game day.â

Wentz wasnât the typical jock in school. He was a superb student, the class valedictorian at Century High School and carried a 4.0 GPA in college.

âHe has all the intangibles,â Roseman says.

While some rookies show up with a diva attitude and actively seek the spotlight, Wentz realizes he hasnât earned anything in the NFL.

âThatâs just my personality,â he says. âI donât feel like Iâm bigger or better than anyone else. Iâm just out here trying to make this team better. Thatâs always been how Iâve carried myself. I donât expect myself to get more credit than I deserve.â

Wentz has been eager to learn as much as possible from Bradford and Daniel. At first, Bradford was so upset the Eagles drafted a quarterback in the first round that he skipped some offseason practices and asked for a trade. But heâs handling the situation professionally and is serving as a mentor to Wentz.

âSamâs been great,â Wentz says. âHe was once the top draft pick. Heâs been through it all. Thereâs lots of things weâve talked about. Itâs a really good [opportunity] for me to not only grow mentally in the playbook, but also off the field and everything.â

Wentz wonât be confused with Tim Tebow, but heâs also a devout Christian who isnât shy about expressing his faith. He often posts about faith on social media. He drove a pickup truck with a cross decal on the back in college. He has âAO1â tattooed on his right wrist. It stands for âAudience of One,â a reminder to live his life for God.

âMy faith has been No. 1 in my life, so it doesnât matter what happens. Like last year I broke my wrist, itâs frustrating but I know thereâs always a bigger plan,â Wentz says. âI enjoy playing this game but at the end of the day I point it back to the Lord and hopefully I can make a positive impact on a lot of people.â

His impact remains to be seen as we wait for Wentz to finally step on the field in a meaningful moment. Only then will we say he lived up to the expectations or fully admit that they were an unfair burden from the start. But if heâs as good as advertised, Eagles fans have been waiting for someone like him. Theyâll just have to wait a little longer.